Eytan Shander: If the Eagles can't win the NFC East this year, it's time to pack it in

All they really need is Jim Schwartz's defense to show some level of consistency — and more Travis Fulgham. 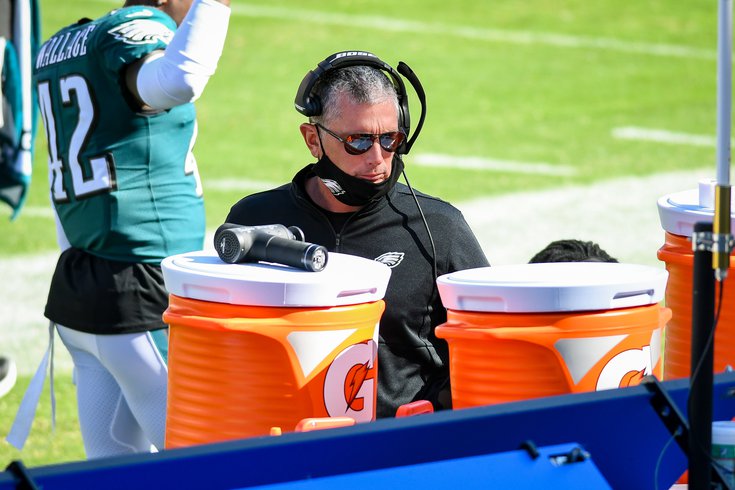 Defensive coordinator Jim Schwartz during the Philadelphia Eagles game against the LA Rams.

Let’s stop firing everyone after every loss. I know it’s a huge ask from us, we shoot first and field questions after the fact. Like something out of one of those car insurance commercials, “it’s what we do.” But let’s be fair to the situation at hand, and truly add all of the facts in evidence.

Jim Schwartz and the defense are maddeningly inconsistent. They looked like a schoolyard bully against the slop the Niners served two weeks ago. A week later, they looked like a bowl of slop soup going up against a sure-fire Hall of Famer.

We are dealing with such an inconsistent team it’s going to drive you full on crazy before we hit the bye week. No coach – including Schwartz – should be fired for what they have or haven’t done to date. No, that shouldn’t factor in simply because it won’t go over how you think. The bad won’t outweigh the good over the past three seasons. Both Doug Pederson and Schwartz are locks to come back based on that time frame alone.

You are probably thinking to yourself by now, “Why is Shander sticking up for this clueless DC after he blew that game and brought in the wrong people to run his system??”

I said the two shouldn’t be fired — or even be on any hot seat — for what they have done, no matter how awful the “bad” has been. But that doesn’t mean there isn’t anything to criticize them over. Let’s stop reacting to inconsistency and start holding them accountable for something in front of them; winning the division.

I will explain, but not winning the division this year is unforgivable.

Players in this brutal league routinely get screwed out of long-term money in so many more ways than one. Dak Prescott went through a ridiculously difficult stretch of time. From losing his brother to being dragged by that idiot Skip for being brave enough to discuss issues with mental health, and now the ankle. I hate Dallas like you hate Dallas, but I feel for Dak as a competitor and a human being.

The Cowboys are an absolute nightmare on defense. I spoke with Newy Scruggs on my radio show on Fox Sports Radio the Gambler. He told me defensive coordinator Mike Nolan lost the locker room. They are now looking at Andy Dalton to provide the same level of consistency and firepower we saw from Dak – assuming Dallas will continue to play from behind against better teams.

Oh, the Cowboys also lost both of their starting tackles, and a couple of guys on defense.

This is what this all boils down to moving forward. Dak’s injury just added a huge amount of pressure on the Eagles to win this division. It was already a living train wreck and insult to the sport. Dallas turning things over to Dalton just turned the heat up on Schwartz and Pederson.

The Eagles show every week they can make something out of the wide receiver position. Travis Fulgham has been electric. More of him please.

So, I’m good with the whole “But Dallas has three amazing WR and ZEKE!” argument. This team is now marginally better than the Giants. The Eagles are playing through a lot of injury but still have more talent on defense than the Cowboys, and a better offensive line even with a rotating Lane Johnson.

For the first time since winning the Super Bowl, Jim Schwartz has legit pressure on him to turn this defense into a winner, or at least a non-loser. You have a tangible goal in winning this division with Andy Dalton being the lone adversary standing in your way.

If this year’s Eagles team can’t outlast Andy Dalton, then there should be serious changes following the season.

I love LeBron James' story and have enjoyed watching the NBA for decades, back to when the Fanatic morning show was Anthony Gargano, me, and the Bro. We used to get deep into NBA talks – way outside the spectrum of just the Sixers. It’s a league that I love to watch and talk about with any other junkie for it.

I was trying to put my finger on why this year was so different, especially with two huge storylines colliding. LeBron’s individual run, securing another Finals MVP and O’Brien Trophy. You also have the most popular team in the history of the league in the Lakers winning a 17th Championship. What more could you ask for? I guess not having it go up against Sunday Night Football.

Something changed as the playoffs started, the energy shifted, and the scoring seemed to drop. Gone were the Suns, replaced by slowed-down offenses. I found myself watching less as things went deeper into the postseason. I was still glued to some games, but not every minute like in years prior. Here’s what I know did NOT push me away from the game this year:

1. Any statements made by players or coaches regarding awareness and change in our society. Black Lives Matter on a t-shirt or court did not push me away from anything. I vocally supported the players right to strike. Again, I am talking about me – as a loyal NBA viewer for decades watching less this season.

2. Keeping up with the NFL. Another issue that I am sure a lot of people had, much easier to talk about in August than live out in October. It was a great sports talk radio discussion when we looked at what September and October could provide. But life is tough for a lot of people, and not everyone has time to consume everything, so the sacrifice is always everything but your NFL team.

The only thing left was LeBron fatigue, which actually has very little to do with the player at all. My personal ratings were down because every single time this man is discussed on those awful morning TV shows, you get the MJ comparison. It’s been going on forever. My Twitter timeline was flooded with more MJ vs. LBJ than Trump vs. Biden.

It’s truly a shame that these TV shows with multi-million-dollar salaries and budgets can’t come up with anything other than reducing James and his accomplishments to, “Well, he isn’t MJ.” It finally caught up with me. I still watched, felt a cool chill when he dedicated the W to Kobe, but my energy wasn’t there this year.

I’m not sure why anyone would continue to watch these shows. They ruin so much of the excitement because they insist on re-making the same movie over and over again.

Each week I’ll provide one big bet I like for the Eagles game. It can be a simple line bet or a more specific prop. Find everything you need at TheLines.com.

The Eagles are still at plus-money to win this division (+120 right now, according to TheLines.com's consensus odds). I imagine it might stay the same after they lost to Baltimore, mainly because Dallas will lose to Arizona. Don’t wait too long as this won’t get any better for you. Philadelphia can get healthier and rely on more talent on defense. The Cowboys are way too deep into their defensive tailspin to pull out of anything.

Catch Props & Locks on Fox29 Thursdays at 7p with myself, Scott Grayson, and the always entertaining Sean Bell! We will be loaded with props for the Eagles game and break down other big value matchup.