John McMullen: Who's to blame for your Eagles angst: Schwartz, Pederson or Roseman? 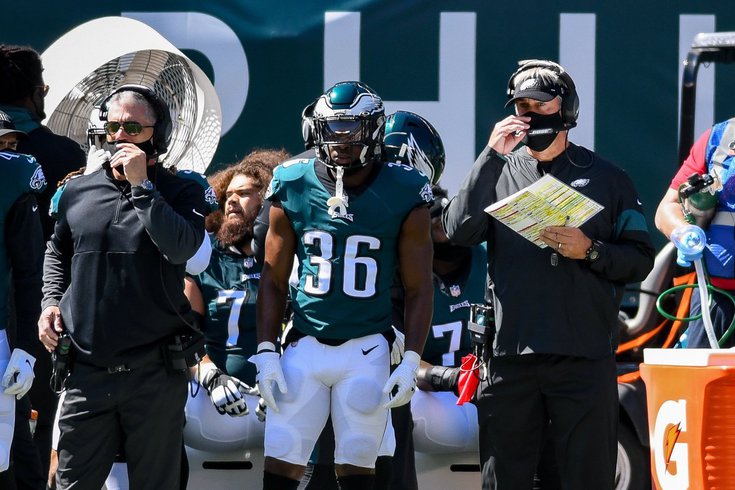 Two days after the latest poor performance from the embattle Nate Gerry during a 38-29 setback in Pittsburgh, Eagles defensive coordinator Jim Schwartz denied that the organization doesn't value the linebacker position.

From a monetary standpoint, however, the narrative is undeniable when you consider long snapper Rick Lovato makes more money than any LB on the Philadelphia roster, a group which is filled with cost-effective entry-level contracts including "starters" Gerry, a 2017 fifth-round project who played safety at Nebraska, and Duke Riley, a trade acquisition last season who entered the NFL as a third-round pick by Atlanta that same year.

T.J. Edwards, currently on injured reserve with a hamstring injury, went undrafted out of Wisconsin in 2019, Alex Singleton is the elder statesman at 26 and was brought back from the CFL as a special teams player, and there are two 2020 draft picks, third-rounder Davion Taylor and sixth-round selection Shaun Bradley, with the latter ahead of the former, an athletic project out of Colorado, on the depth chart.

Fans just want Gerry off the field, but that's easier said than done.

Edwards has provided the most competency when healthy, but that's because he wasn’t being overwhelmed with coverage responsibilities, his weakness as a player. Meanwhile, it's evident Taylor simply isn't ready, and expecting any sixth-round pick like Bradley to be a capable starter early in his first season is pie-in-the-sky evaluation.

"They are all making progress. They are physically talented," Schwartz said of his rookies. "When we can work them in, we'll work them in when it makes sense to the 11 guys on defense. We're in the business of trying to do whatever we can to win games, and doing what we think is best to win games.

"When it's time for those guys that we think it’s best for us to win games with them on the field, we'll do it.”

The context to all of this is that the Eagles came into the 2020 season with the fewest cap dollars allocated to the position in the entire NFL after deciding to let veterans Nigel Bradham and Kamu Grugier-Hill walk in the offseason. Rewind even further and you will see the strange release of L.J. Fort [blame that one on Schwartz], who is now a starter in Baltimore, the Eagles' Week 6 opponent.

“Every position is a priority for us,” Schwartz explained. “I mean, every position is important on the field. And I disagree that we haven’t spent resources on it," rewinding to the days of Bradham and some lower-level free agent signings that didn't work out like Fort, Corey Nelson, and Jatavis Brown.

"I mean, you mentioned some of those guys we’ve had. We pay free-agent money to guys like Nigel. This year, we put some draft picks in there."

In a conference call with Philadelphia-area media Wednesday John Harbaugh explained it well.

“You pay the player, not the position,” the former Eagles assistant under Andy Reid said when asked about his current team’s success at LB. “It’s easy to pay someone like Ray Lewis. We wanted to pay CJ Mosely. Someone just paid him more.”

The obsessive need by some for Schwartz to verbalize the obvious — the Eagles' LBs are bad — is unrealistic, however.

Schwartz has forgotten more about defensive football than any of his critics will ever know and he understands Derrick Brooks isn't lurking around the corner. But Lamar Jackson and the Ravens are, so he needs to prepare the guys he does have. That means the best those with the torches and pitchforks got was "We have the guys that we have."

"We’re going to work hard to put those guys in good position. But I don’t think from anyone’s standpoint it’s not a priority for us,” said Schwartz.

Blame is always the priority of the disaffected, though, so in the spirit of altruism, we’re here to point you in the right direction in an effort to get the angst at least targeted properly — sort of like a QB, say, Ben Roethlisberger, identifying Gerry in coverage.

The Eagles now have a traditional general manager/coaching setup where Howie Roseman is responsible for providing the personnel to the coaching staff, something Schwartz stressed.

“I’ll leave team-building stuff and roster management to Doug and Howie,” Schwartz said when asked about the LB personnel. “So I really can’t answer your question right there. I’m confident in the guys we have. We’re getting the young guys up to speed. I think our emphasis is on 11 guys playing better, not any one position.”

The disconnect for many is that it's been reported that Schwartz has been given tremendous weight when it comes to the team's defensive personnel, but there is no contradiction there, something muddled perhaps by stints where head coaches Andy Reid and Chip Kelly were at times given power over personnel.

The buck stops with Roseman now, but every GM has a staff that furnishes information and any good personnel chief is always trying to get players that fit the philosophy of his coaches.

A former head coach brought in by Roseman to be Pederson's defensive coordinator, Schwartz has consistently deferred when questions are asked that reach past his role as the DC, often labeling things as "a Doug question” or "a Howie question."

This isn't hard, though. If you want to point the finger at personnel, aim it at Roseman. If you have an issue with scheme, look toward Schwartz. And if you want to be more pragmatic, look in the mirror and stop overrating the talent on hand.