A look at Eagles WRs Travis Fulgham, John Hightower and Jalen Reagor, with gifs and stuff 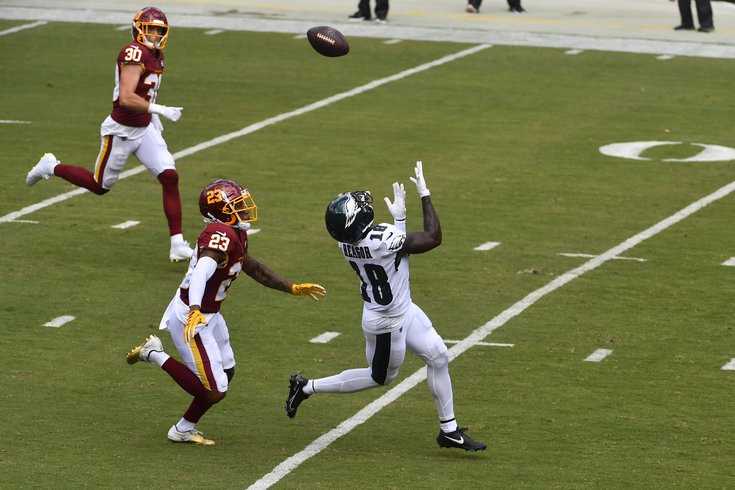 In Philadelphia, the wide receiver position has been a lightning rod for conversation since, uh, forever. Since the Eagles have three new, young receivers getting significant playing time, let's take a look at what each has shown through the first five games.

We cut up video of every target for Travis Fulgham, John Hightower, and Jalen Reagor, which we'll show first, with analysis thereafter:

Fulgham was drafted by the Lions, waived, claimed off of waivers by the Packers, waived again, and claimed by the Eagles during training camp to be something of a camp body. He showed enough in camp to make the practice squad, was called up to the active roster due to a slew of injuries, and has made the most of his opportunity, as he has been the Eagles' best receiver so far this season, by far.

• Speed: Obviously not a blazer.

• Hands: Nearly dropped an easy catch on the play in which he stayed alive for a scrambling Wentz. The ball almost fell to the ground, but he was able to recover and make the catch. Otherwise, he has been a hands catcher, plucking the ball out of the air away from his body.

• Run after catch: On his TD against the 49ers, he did a nice job staying in bounds and finishing with a score after making the catch, despite the DB trying to angle him out of bounds. Against the Steelers, after extending for a catch over the middle, he took a hit from Minkah Fitzpatrick, but stayed on his feet and kept running. So far, he has shown a no-nonsense style of running once he has the ball in his hands. He has gotten every bit of yardage that’s there, without dancing.

• Route running: Hasn’t shown much shake yet, but he gets to where he needs to be. Seems aware of where to sit down in zone coverage, maximizing spacing in between defenders, and squaring his body to give the QB a big target. He has also done a nice job staying alive for his QB when he is in scramble mode. Additionally, he runs good routes even when the ball isn't coming his way. For example, he ran a nice pick route on 4th and 4 against the 49ers, getting John Hightower open and creating an easy conversion.

As an added bonus, he has lined up and caught passes from all over the formation. He has lined up inside, outside, and even as something of an H-back in the backfield.

• Contested catches: Went up high for a pair of catches near the sidelines vs. the Steelers' Steven Nelson and Mike Hilton. He had a size advantage, and used it.

Outlook: We'll see, but the Eagles may have something here. He has pretty much been what the Eagles hoped J.J. Arcega-Whiteside would be. If he continues to play anywhere near this level for the entirety of the season, the Eagles could have their starting X receiver of the future.

Hightower was a fifth round pick in the 2020 NFL Draft out of Boise State, known for his speed. He had an outstanding training camp for a rookie, making plays regularly, without any obvious, noticeable mistakes (like drops, for example). In the real games, he hasn't been as good.

• Speed: He got open twice down the field against the Steelers by simply running by the corner, but was unable to finish. He probably needs more reps to improve ball tracking skills.

• Hands: As noted above, he caught everything in training camp, but has two drops already in real games. One was an easy catch over the middle against the Football Team. He maybe heard footsteps? The other was in the back of the end zone against the Steelers at the end of the first half. On the latter drop, he probably wouldn’t have stayed in bounds anyway, but he still should have made the catch.

• Route running: He has run a few nice slants, most notably on the aforementioned 4th and 4 against the 49ers. He also ran a nice comeback route against the Steelers. Sold the deep route and turned, gaining separation on Joe Haden, giving Wentz an easy throw.

• Run after catch: On his first catch of the season, he seemingly went down on his own instead of absorbing the hit. That was not encouraging. He hasn’t broken any tackles yet, and seems to go down easily on first contact. He showed run after catch ability at Boise State, but that hasn’t translated yet.

• Situational awareness: Against the Bengals, before the end of the first half with under a minute left on first down, he caught a quick pass, could have easily gotten out of bounds to stop the clock, but cut inside for an extra yard or two and the clock continued to run. Against the Steelers, in a very similar situation, he did it again, likely costing the team points. Mistake are OK for young players, but you have to learn from them.

Outlook: He's a rookie fifth round pick, so expectations shouldn't have been high, but he raised them with his training camp performance. His speed is obviously his greatest appeal, but that speed isn't useful unless he can finish. I believe that playmaking ability is there, but it'll be hard for the team to wait around to unlock it when other receivers come back from injury.

Reagor was the Eagles' first round pick in 2020, because of his explosiveness. The Eagles were willing to overlook a lack of production at TCU (relatively speaking) because of his substantial upside.

• Speed: Obviously a stellar athlete from what we saw in training camp. That showed up right away in Week 1, when he blew right by Ronald Darby and made a 50-yard catch down the field. He also showed natural tracking ability on that play.

• Run after catch: In addition to speed, his run after catch ability was the other obviously appealing trait. The Eagles gave him some opportunities to make plays with the ball in his hands after the catch against the Rams, and on at least one play, he had some room to run outside, but instead ran into traffic inside. When he gets back from injury, the Eagles should keep feeding him as an extension of their run game

• Hands: Had issues with “concentration drops” at TCU. No drops yet on a small number of targets, due to injury. He also caught the ball well in training camp.

• Route running: Had a chance for a second huge play against the Football Team, but you can see in the video above that he puts it in cruise control at around the 40 yard line for about 10 yards before he turns the jets back on. Had he been full throttle all the way, he likely hits his head on the goal post.

• Toughness: Took a big hit against the Rams, tearing his UCL in the process, and played the rest of the game, making two more catches. He also returned sooner than expected after suffering a shoulder injury in training camp.

Outlook: He started from Day 1, and he just looks like a starter. That'll be at the Z position whenever DeSean Jackson is completely out of the picture.