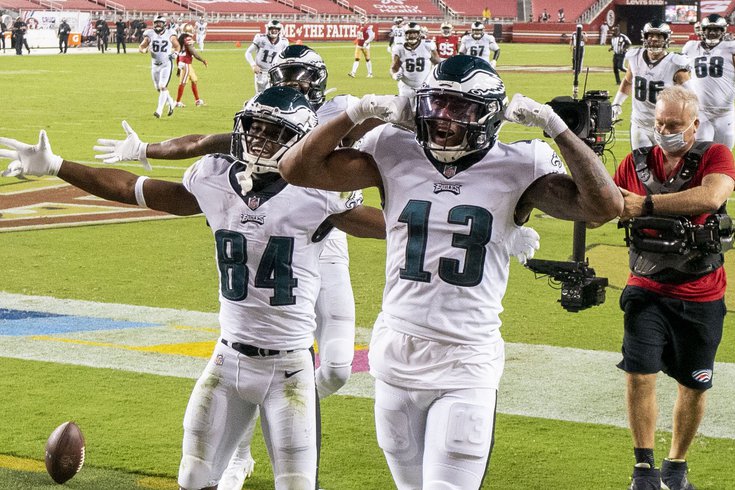 It feels good to just be done with Week 5 doesn't it?

With games postponed, rescheduled, cancelled (resulting in a Tuesday night game) and bye weeks in play, fielding a starting roster was a battle in and of itself for fantasy owners.

There is no guarantee it will be any easier in Week 6, but it appears the COVID-19 outbreaks in Tennessee and New England are finally under control. As we try to do every single Thursday, we've singled out a player at each position we recommend you start (if you have him) and sit (if you have another playable option). We are avoiding no-brainer suggestions — obviously, start Ezekiel Elliott, come on man. The following are fringe players who are likely to be 50-50 toss-ups on most rosters.

Here's our sit/start picks for Week 6:

This one is based pretty much solely on matchups. The 0-5 Jets are terrible and the Dolphins offense is surprisingly trending up after their blowout upset of the 49ers. Fitz-magic was the third best scoring fantasy QB in Week 5, and there is no reason to believe the Jets will put up more of a fight than the Niners did, injuries or not. Fire him up for this game — and target him as a streaming option if you are between quarterbacks.

Another matchup call for Week 6, Burrow is coming off arguably his worst start as a pro last week, throwing for just 183 yards and an interception against the Ravens in a loss. The defense from Indianapolis won't be any easier, as they remain one of the top units in all of football. Burrow will eventually get his groove back — just not this coming Sunday. Start someone else if you can.

Robinson is truly showing he can do it all for Jacksonville. He's been targeted 21 times in his last four games, and if you average out his carries and catches, the young running back touches the ball 17 times per game. That kind of opportunity makes him a start-able option, and against the Lions (a pretty bad defense against running backs) you have a no-brainer decision to pull the trigger on Robinson this week.

Akers' health is a concern, and both Akers' and Brown's touches are a concern too. Last week, with the aforementioned duo both back, they were badly out touched and out-gained by Darrell Henderson, who scored two touchdowns on 18 tries (combined runs and catches). The Niners, for all their struggles, have been solid against the run, making this an even less appealing match up for owners of L.A. backs. Henderson is a go, but Akers and Brown are not for Week 6.

With or without a healthy D.J. Chark on the field (his status for Week 6 is iffy), the rookie Shenault has proven he's a desired target for Gardiner Minshew. In his last two games, Shenault has caught 12 passes for 165 yards. The Jags have thrown the ball over 40 times in most of their games and their opponent, the Lions are the 9th worst at stopping the pass. Shenault looks to have a pretty high floor despite being a rookie and is earning fantasy trust.

The Ravens secondary is very good. The Eagles passing attack is very bad. This one is simple. Fulgham burst onto the scene with back-to-back monster games out of obscurity. There is tape on him now and the odds of him doing it a third time, despite some great chemistry with Carson Wentz, are probably unlikely. Ward has been the slot wideout for the Eagles in every game, but has been inconsistent and is not a big downfield or YAC threat — and he is really a touchdown or bust option. Avoid the Eagles pass catchers this week if you can.

The bye week the Packers had in Week 5 was almost enough to dampen the flames of red hot Tonyan, who has caught an insane five touchdowns on 13 catches this season. With Davante Adams likely back this week and some tape out there on the red zone connection he has with Aaron Rodgers, there's a chance he could fizzle on his own. But there is a body of work, not just a single game, that has seen him a valuable weapon for the Packers. Ride the wave and hope it continues here with Tonyan.

There isn't much fantasy value for any non-Terry McLaurin pass catcher within Washington, and Thomas has fallen off the map pretty quickly, catching a single pass in each of his last two games. Past performance is the best predictor of future results.