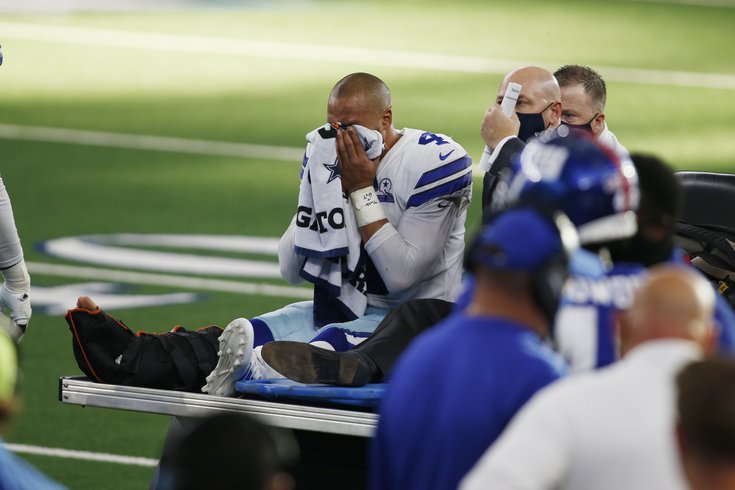 The quantity might not be there of previous weeks, but there was no shortage of serious injury in Week 5 across the NFL. Most notably, the top quarterback in fantasy, the second highest scoring running back and several starting caliber players went down on Sunday.

What should fantasy owners of recently injured players do next? What is the latest news on the players in question?

Here's a look at what we know after a consequential week of football:

It was a disgusting, gut-wrenching injury Sunday afternoon that ended Prescott's season, as he was leading all fantasy football players with an insane start to his 2020 season. He had surgery Sunday night for a compound fracture in his ankle and a return during the regular season seems nearly impossible. Andy Dalton is the new QB1 in Dallas — and though he did help the Cowboys hang on and win against the lowly Giants, he probably offers a significant drop off in numbers not only as a fantasy quarterback but also for the talented stable of Dallas receivers going forward.

Chark exited late in Sunday's contest with an ankle injury. It was not nearly as bad as Prescott's, but appears it will be a lingering injury — one his fantasy owners will need to monitor during the week going forward. Rookie Laviska Shenault led the Jags in receiving in his absence and could be their top option should Chark miss any time.

As many viewers of Sunday Night Football no doubt saw, Alexander Mattison had a breakout game getting 112 yards on 20 carries and three catches as well. He out-touched the team's top running back, Cook for the first time. Why? Well Cook left the game in the third quarter and headed to the locker room and did not return. Reports are still unclear as to what the injury is and how serious it is but there is a chance those who drafted and stashed Mattison could be rewarded. We'll update you right here as soon as Cook's diagnosis leaks out.

Thomas may have been healthy enough to play Monday — he appeared on injury reports as questionable as he works back from an ankle injury in Week 1 — but he will not suit up, not due to injury concerns but to a team rules violation, reports say. Thomas reportedly punched a teammate and due to an altercation in practice he's being held out for disciplinary reasons. No word on how this impacts his Week 6 availability.

Green is quickly reaching "old and washed up" territory in Cincinnati, with rookie quarterback Joe Burrow finding more chemistry with Tyler Boyd and Tee Higgins anyway. Green exited Sunday's game with a hamstring injury after posting no catches. He has just 14 through five games this season and no touchdowns. He's probably deserving of a bench spot regardless of injury status until he shows he's a productive part of the Bengals offense again.

Watkins, who hauled in a touchdown in the Chiefs' surprise loss to Las Vegas Sunday, left the game with a hamstring injury. He'll likely appear on future injury reports and will be someone worth keeping an eye on as Week 6 approaches.

Hogan hurt his knee against the Cardinals and is having an MRI to determine the extent of the damage. He's a fringe fantasy player — especially on the Jets putrid offense — so consider simply dropping him if he's on your bench.

The veteran tight end left Sunday's game with a neck injury and did not return. He'll have a status worth watching during the week.

Allen exited Sunday's loss for Washington with an injury to his arm but, according to head coach Ron Rivera, he'll remain the starter if he is healthy for Week 6.