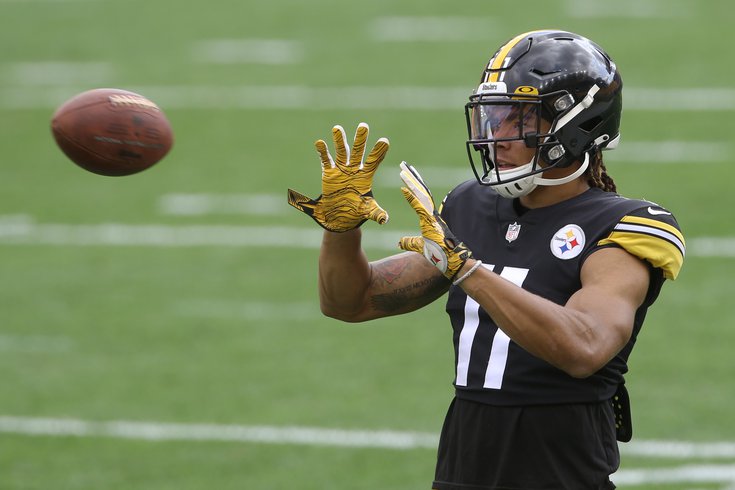 Chase Claypool is just the latest of rookie wide receivers to break out this season.

It's almost the midway point of the regular season for fantasy football and things couldn't be more challenging for serious players. Injuries are mounting with fewer and fewer suitable backups to pick up and start. Games are being constantly postponed, cancelled and shuffled due to COVID-19 and there are clear haves and have-nots forming in every league. And bye weeks are here.

Heading into Week 6, there are a handful of very promising free agent options with high upside, but not at every position. There are four teams with byes: Patriots, Raiders, Seahawks and Saints.

As we do every week, here's our attempt to suggest a player (or two, or three) to target with your FAAB before Week 6:

The Raiders shocked the Chiefs this week, and it's time to seriously consider Derek Carr not only as a streaming QB option for desperate teams, but perhaps a weekly play heading into Las Vegas' Week 6 bye. He has thrown 11 touchdowns to just one interception and has completed nearly 70% of his passes. He has downfield threats (Henry Ruggs III, Nelson Agholor) and safety valves (Darren Waller) and running backs (Josh Jacobs) all who can make plays and catch the football. When the Raiders get back from their week off, he is a pretty safe play for those in need of quarterback help.

We won't insult you by suggesting you pick up Alexander Mattison (who is emerging as a start-worthy RB in Minnesota) or Damien Harris (whom we discussed a week ago). There are not a ton of running backs of note available right now, but of course an injury could change that completely. Which is why we've decided to go with Rex Burkhead, who has been a consistent contributor, but not as a starter, for the Patriots who are heading toward their bye. He is owned by just 42% of leagues according to Yahoo.

Here's the big one. Rookie wide receiver Claypool — who had four touchdowns against the Eagles last week — is owned in just 9% of ESPN leagues right now. If you happen to be in the 91% of those that have him free and available, this might be your best opportunity to get a game-changer. He also has extreme keeper value. Claypool has only played in four NFL games but did score a touchdown in Week 2, showing he is not entirely a one-trick pony. Speaking of the Eagles, they have an unexpected star at wide receiver as well in Travis Fulgham, who has shown to have incredible chemistry with quarterback Carson Wentz and is also a player for whom the bank should open wide. Either player is start-able next week.

It really is slim pickings for tight ends right now, and almost every free agent option out there is a touchdown boom-or-bust play. Tom Brady famously loves tight ends, and with OJ Howard injured and Rob Gronkowski showing his age, Brate is perhaps the best play in Tampa right now. He is owned in just 2% of Yahoo leagues, had a touchdown in Week 4 and five catches in Week 5.