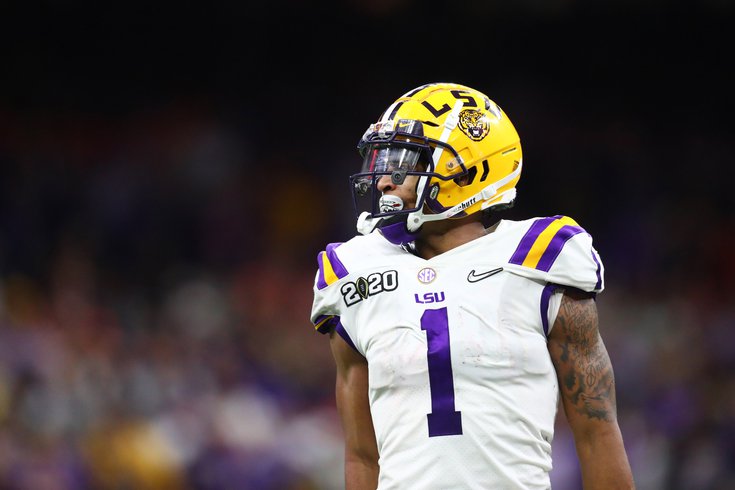 McNeill is a short, squatty, explosive DT in the mold of Javon Hargrave who made Bruce Feldman's freaks list this year.

McNeill, despite his massive size, vertical jumped 32 inches. Don’t be surprised if the junior runs in the 4.9s by the time he’s ready for the NFL combine. He also benches 445 pounds and squats 640.

The Eagles could use reinforcements at DT, with Fletcher Cox and Malik Jackson aging.

Harris is a taller back than ideal at 6'2, and it takes him longer to get to full speed than some other backs, but once he gets a head of steam, he's difficult to bring down, and he forces defenders to earn their tackle on every carry. His numbers:

As the feature back in 2019, Harris became a productive receiver out of the backfield as well, catching 27 passes for 304 yards (11.3 YPC) and 7 TDs. As you'll see in the following highlight reel, some of those plays in the passing game were impressive.

Harris would be a bigger complementary running back to the more dynamic Miles Sanders, and would give the Eagles a player who can carry the load if Sanders is unavailable, which he has been at times in his first two years in the pros.

I think he's a late 2 or an early 3. If you consider that the Eagles reportedly would have either taken S Jeremy Chinn or RB J.K. Dobbins in the 2020 NFL Draft if Jalen Hurts were gone, it's not out of the question that they'd take a RB like Harris that high, despite having used a 2 on Sanders in 2019.

Chase is a potential top 10 prospect in the 2021 NFL Draft, and it's sure looking like the Eagles will have a top 10 pick. Would they take a receiver in the first round two consecutive seasons? Well, considering they're heading into Week 4 with Greg Ward and John Hightower as their top 2 receivers, that's not such a stretch.

Chase would be an excellent fit as an X receiver in the Eagles' offense, and would pair nicely with Jalen Reagor as the Z.

To note, Chase opted out of the 2020 season to prepare for the 2021 NFL Draft, so he won't participate in this game.

Like Chase, Ross would be a good fit at the X position in the Eagles' offense. He has good size, and he uses it well, boxing out defenders on in-breaking routes, and winning 50-50 balls down the field and in the red zone. He also shows good hands at times, though he will have occasional concentration drops. A look at his true freshman season:

Normally, Ross would be thought of as a likely first-round pick. However, he comes with major injury risks.

Dabo Swinney just said Justyn Ross will not play this season. Said there's no guarantee he can play football again. Has a congenital fusion that he was born with. It showed up in an X-ray this spring. Will have surgery this Friday.

It will be interesting to see if Ross declares for the draft next offseason, assuming recovery from his surgery goes well, and whether he can become the same player he was. His draft position is almost impossible to predict at this time.

Poljan played quarterback at Central Michigan, before converting to tight end. He is a graduate transfer now playing at Virginia. In his first full season at tight end in 2019, Poljan had 33 catches for 496 yards (15.0 YPC) and 4 TDs, decent numbers for a guy playing full time there for the first time.

In his first game at Virginia, Poljan had 4 catches for 44 yards. He has great size, he understands passing concepts from a quarterbacks' perspective, and the Eagles love them some converted QBs. He'll need work as a blocker, but he has the size to be an effective one.

If the Eagles move on from Zach Ertz at some point before next season, which feels like a real possibility, they will need TE depth.