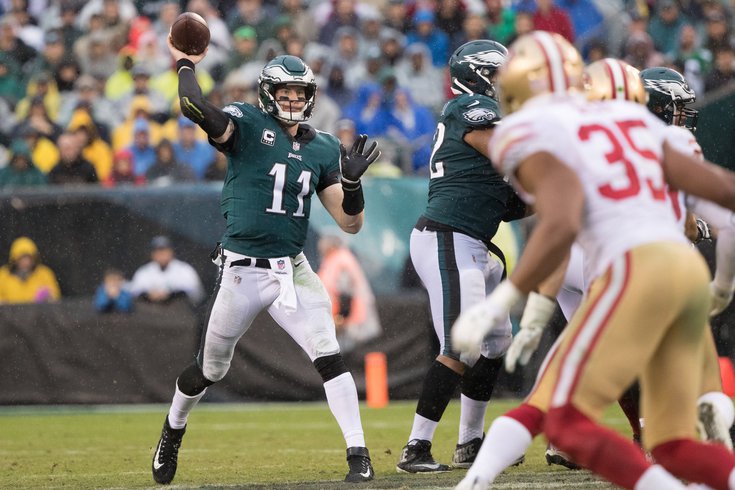 Philadelphia Eagles quarterback Carson Wentz passes against the San Francisco 49ers during their last meeting back in 2017.

We're back for another week of Eagles predictions, and as expected, things have turned dark after the Eagles again failed to pick up their first win last Sunday against the Bengals. Still, somehow, at 0-2-1, the Birds are just a half game off the pace in a dreadful NFC East. Go figure.

For the first time this season, however, the Eagles will enter a game as the consensus underdog, according to TheLines.com's weekly odds. True, they were a dog against the Rams at one point, but the line swung back in their favor heading into Sunday. That won't happen this time around as the Eagles are currently touchdown dogs for Sunday night's primetime matchup against the defending NFC champion 49ers in Santa Clara.

With their next two games coming against the Steelers and Ravens, they're likely going to be playing the underdog role for at least a few more weeks. But that doesn't mean it's time to break out the dog masks just yet, because the way this team has played this season, it's hard seeing them playing spoiler, even if this weekend's opponent will be without its starting quarterback and several other key players.

As we do every week, let's take a look at what our seven writers think about Sunday night's matchup in the Bay Area, as well as all the latest lines from local sports books and how Philly fans can tune into the action — if they even want to put themselves through another week of this. And based on our staff picks, they may want to find alternative programming for the evening.

[A quick note on our individual records: No one predicts ties — none of you want that — so instead of everyone getting a loss for last week, we're going to give everyone a tie, because why not. Everyone was getting the same result either way, but at least this makes us feel a little better about our poor records so far.]

The "easy" part of the Eagles' schedule is over, and as you all know, they don't have any wins. We're already at Week 4, and the feeling here is that most fans couldn't possibly care less about the matchups in this game. And so, let's not even bother with all that here, and go through the Eagles' schedule, re-predicting wins and losses:

Imagine suffering through this kind of season, and the Eagles only getting the 7th or 8th pick in the draft?

I am really trying to find some way to pick the Eagles in this one but everything seems to be going against them. Despite the Niners dealing with a bevy of meaningful injuries themselves, Carson Wentz will be without Jalen Reagor, DeSean Jackson, Alshon Jeffery, and Dallas Goedert on offense — not to mention his ragtag offensive line. I mean, if you think Greg Ward can lead this team to victory by catching seven-yard slants, more power to you. I read somewhere George Kittle will be back too — good luck Eagles defense.

They’re also traveling pretty far for this one, and I do believe there is some semblance of a home-field advantage even with no fans. I think Philly hangs around and I do think they have a chance in this one, especially if Nick Mullens is under center and the defense can hang on. But I’m not falling into the trap. Eagles stay winless.

Yes, that's an ugly football score, but it's one worthy of this Eagles team. Traveling across the country for a primetime game is hard enough, but add in all the Eagles injuries (and, more importantly, their lack of depth) and it's really hard to see this team turning things around on Sunday night.

I'm not going to analyze any matchups or break down all those injuries — there are plenty on both sides of the ball, but the Niners seem much more equipped to deal with them, even with their starting QB out — because that would be giving the winless Birds too much credit. They've been playing like one of the worst teams in the league, they're on the road and they're facing the defending NFC champions. Let's not overthink this one.

There’s an old saying in Tennessee — I know it’s in Texas, it’s probably in Tennessee. It says fool me once, shame on you. You fool me, you can’t get fooled again.

San Francisco tore apart a bad Giants team last week, and I don't see the Eagles being much better than the Giants at this point.

If the Eagles struggled against woeful Cincinnati, what evidence is there to say the Eagles will do any better against the defending NFC champions?

Shame on me and anyone else who took the Eagles to cover the spread against the Bengals. I won’t be fooled for the fourth time. The Eagles are a heavy road-dog but the “sharps” keep moving the lines away from Philadelphia each week. What a mess.

This is a perfect matchup of polar opposites. One team that can’t get out of the cloud of injury vs. the one team that deals with any and every injury. Oh, and George Kittle is back. Good luck…

In many ways, Sunday night's game between the Eagles and 49ers is an Attrition Bowl with both sides having drug-store receipt-sized injury lists. The Eagles led on Wednesday, 14 -10, and that doesn't even include the players on injured reserve.

One of the many disappointments with Philadelphia this season is the way it has handled the COVID-19 environment. The landscape is like a stress test for the entire league and as a perceived strong organization with a veteran coaching staff, the Eagles should have had the advantage over most. It hasn't turned out that way early and now you have another hurdle in the form of the first cross-country road trip under the far stricter traveling protocols.

On the field, the Eagles are just not making plays. The offensive struggles are obvious and well-chronicled but the defense is actually a top-10 unit right now -- No. 9 against the rush, No. 7 against the pass, fifth in third-down defense, and No. 5 overall. What the unit hasn't done is create turnovers through three games and the Eagles' minus-7 turnover differential is dead last in the entire NFL.

In theory, a backup quarterback is more likely to give it away, but the assumption on both coasts seems to be that Nick Mullens isn't all that different from Garoppolo and the main issue with the 49ers will be stopping perhaps the most innovative run-blocking schemes in the league.

If the Niners were healthy, this would be a no-chance game. Instead, it should be a dog fight but until Carson Wentz stops providing turnover-worthy plays for the opposition and Jim Schwartz's defense starts providing some game-changers of its own, it's tough to predict success especially after the cross-country trip.

MORE: WTS: Eagles could move on from Pederson or Wentz, but Roseman is here to stay