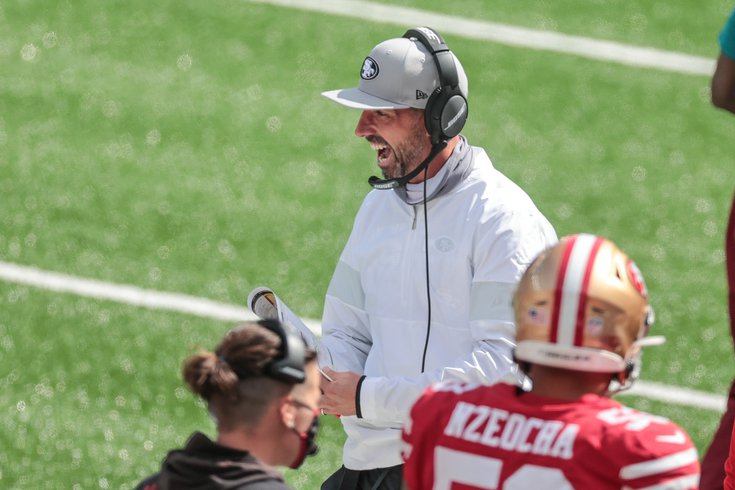 Someone tells Kyle Shanahan in his headset that the Eagles are their next opponent.

For the gambling enthusiasts, here are my Week 4 NFL picks. To note, the team logos indicate who I think will win the game, not cover the spread. At the end of the picks, I'll note a few teams that I like based on the spread. All the below spreads are courtesy of the consensus Week 4 odds at TheLines.com.

It was particularly embarrassing asking Jeff Driskel about his pinky deformity, because he's a quarterback, and as such, he was answering questions from a podium, as opposed to the rest of the players, who you could speak with one-on-one. Using the question face-off skills that I had honed in the tough Philadelphia media market, I won a faceoff over some other media nerd (boom!), except I'm basically shouting, "HEY JEFF, CAN I TAKE A PICTURE OF YOUR DEFORMED PINKY?!?"

Naturally, Driskel was confused by the query, and asked me to explain. Of course, now all these other media folks from around the country are also wondering why I'm shouting about pinky deformities. I explained to Driskel that he was one of nine players at the Senior Bowl with a pinky deformity on his right hand, and I was doing sort of a photojournalist story on them. He then remarked, "That's too weird."

It was then that I knew Jeff Driskel was destined for failure in the NFL. Anyway, Driskel is likely to split quarterback reps with Brett Rypein for the Broncos on Thursday night against the Jets, so give me the Jets all day. Also, my Pulitzer must have gotten lost in the mail.

Colts (-2) at Bears: I'm surprised to learn that the Colts have the second-best point differential in the NFL, and the best in the AFC. Frank Reich knows Nick Foles' strengths and weaknesses as well as anyone, and can help prepare for him.

Jaguars at Bengals (-3): My picks feel kind of chalky this week, so let's just throw in this random upset in a "who cares" games.

Browns at Cowboys (-4.5): At 2-1, the Browns apparently have their first winning record in six years. All it took was wins over the Football Team and the Bengals to get there. 🤔

The Cowboys will score points, but their defense hasn't really stopped anyone yet this season. I like the Browns chances of running the ball effectively and at least keeping this game close, but we'll take the Cowboys to win.

Saints (-4) at Lions: We're used to seeing the Saints being touchdown-or-higher favorites in this type of matchup. The oddsmakers are souring on them, like the rest of us.

Chargers at Buccaneers (-7.5): Chargers games have to be some of the hardest to pick. Every year that team loses games it should win, and wins games it should lose. I'm tempted by the 7.5 points here, but I just can't do it.

Cardinals (-3.5) at Panthers: After dropping a home game to the Lions, we'll get to see how Kyler Murray responds to a bad game and a bad loss. I'll take that ride with them.

Vikings at Texans (-3.5): These two teams kind of remind me of each other. They both make the playoffs their fair share, and are usually bounced pretty quickly whenever they do. This year, they're both off to 0-3 starts, so something has to give. The Texans' 0-3 is much less offensive, seeing as they have played the Chiefs, Ravens, and Steelers.

Giants at Rams (-13): The Giants are the worst team in the NFL. Easy survivor pick here.

Patri*ts at Chiefs (-7): This game is sort of a passing of the torch of one NFL juggernaut to the next. The Chiefs, however, are awesome without the need for cheating.

Eagles at 49ers (-7): The "easy" part of the Eagles' schedule is over, and as you all know, they don't have any wins. We're already at Week 4, and the feeling here is that most fans couldn't possibly care less about the matchups in this game. And so, let's not even bother with all that here, and go through the Eagles' schedule, re-predicting wins and losses:

Imagine suffering through this kind of season, and the Eagles only getting the 7th or 8th pick in the draft?

Steelers (-2) at Titans: This game may happen on Monday or Tuesday. To be determined. There are reportedly nine players/coaches who have contracted COVID, so I'll lock in my Steelers pick at -2 while I still can.