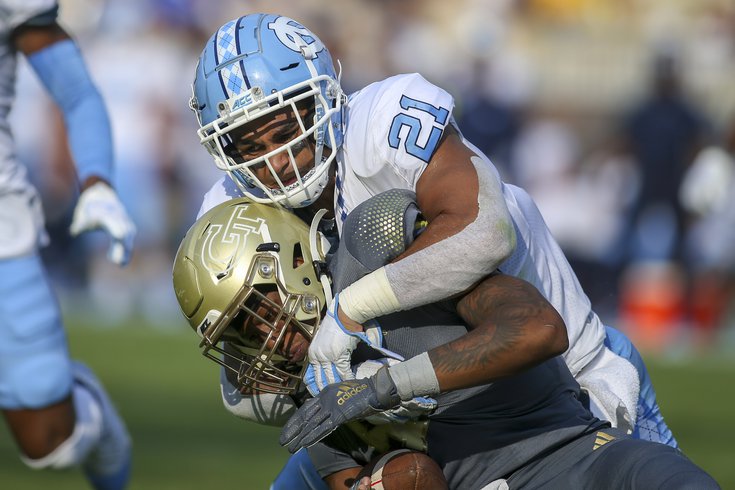 Surratt is an interesting prospect who moved from quarterback to linebacker. In his first full season at LB in 2019, Surratt racked up 115 tackles (15 for loss), 6.5 sacks, an INT, and a forced fumble. Impressive. In two games in 2020, he already has 17 tackles, 3 sacks, and a pass breakup. Here's a look at him both as a quarterback and a linebacker. As you can see, he doesn't lack athleticism.

The Eagles' linebackers have been predictably bad in 2020 after they didn't address the position in free agency, or draft any pro-ready linebackers. Surratt seems to be a quick learner, and he understands the game from a quarterback's perspective. He would likely help right away, but is probably a second-round prospect.

Wilson plays the "star" position in Florida's defense, which is a CB-S-LB hybrid role. If you'll recall, a popular player mocked to the Eagles during the 2019 draft was Chauncey Gardner-Johnson, who played the same role at Florida. Wilson has experience both in the the "star" role, and at outside corner as well. That type of versatility will appeal to the Eagles, who like their defensive backs to be "positionless."

Wilson would fit in to the Eagles' defense in a similar way as K'Von Wallace.

Like Wilson above, Burney also played a little in the "star" position for Florida, as well as safety and linebacker. He's very likely just a linebacker going forward.

Burney is probably a Day 3 guy if he comes out next offseason, in which case he'll check a bunch of linebacker boxes for the Eagles:

Of course, the Eagles haven't had a ton of luck seeking out that linebacker profile, but he seems like a player they'd like.

Smith's fit with the Eagles is pretty straightforward. He is a brick wall offensive lineman with left tackle and left guard experience who anchors against power, and moves the line of scrimmage in the run game. In the NFL, he'll very likely play guard.

The hard part with Smith is determining how healthy he is, as he has had recurring issues with blood clots in his lungs, though he seemed to get through the 2019 season without being affected by them. His draft position will be very difficult to predict, given his medical history.

Rodgers is a slot receiver who is built more like a running back. He tore an ACL in March of 2019, and somehow recovered fast enough to play for Clemson in Week 2 that season. He played a smaller role in Clemson's talent-rich offense in 2019, catching 30 passes for 426 yards (14.2 YPC) and 4 TDs. As you can see below, he wore a knee brace, and was still able to outrun defenders:

In Greg Ward, the Eagles have a slot receiver with reliable hands, but not much in the way of explosiveness. He is currently averaging 8.7 yards per catch for his career. The belief here is that there's a role on a roster for a player like Ward, who works hard, gets the most out of his ability, and can contribute on special teams, but a more explosive slot receiver could be a difference maker in the Eagles' offense. Rodgers has more speed and ability to get yards after the catch.