Who is responsible for Travis Fulgham landing on the Eagles' roster? 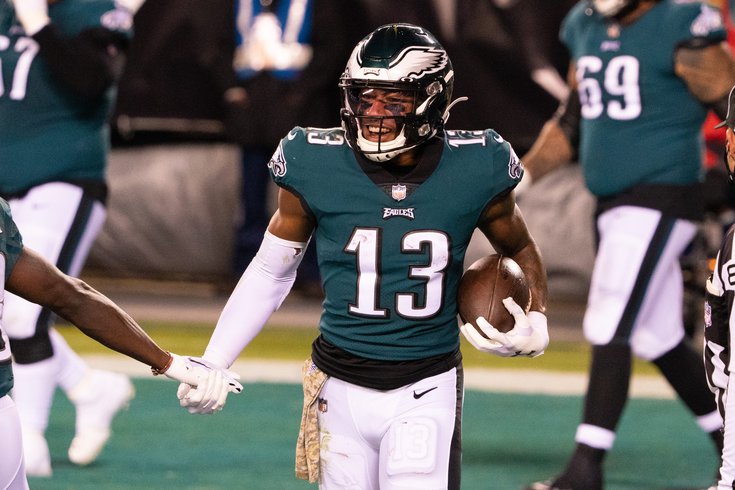 On August 20, deep into their training camp already, the Philadelphia Eagles announced that they had claimed wide receiver Travis Fulgham off of waivers from the Green Bay Packers. Looking back at their announcement on Twitter, the replies are a mix of "Who?!?" memes, sarcastic comments that the Eagles would now win the Super Bowl, or mentions that the team is now a "WR factory."

Those types of transactions are usually inconsequential. They occur commonly around the league as teams fill in the back of their rosters, but usually don't result in any sort of extreme success story like the Eagles have experienced with Fulgham, who has clearly become the Eagles' best skill position player on the team this season.

However, in the case of the Eagles and some other teams around the league, they are hardly arbitrary decisions, as a lot of behind the scenes work goes into such acquisitions, and usually over the period of years. In the case of Fulgham, let's take a look at the history of the homework that went into what seemed at the time like a random addition to the roster.

• Fulgham was initially scouted by Jim Ward, the Eagles' Northeast Area Scout, who brought Fulgham to light within the Eagles' organization. He was identified by Ward as a late bloomer, who had only started playing football as a junior in high school, a self-made prospect who had walked on at Old Dominion and earned a scholarship there. Fulgham had a productive senior season in college, which included a big game against Virginia Tech (nine catches for 188 yards and a TD) that caught the attention of — and garnered an invite from — the Senior Bowl.

• Ward got to know Fulgham better on a personal level at the Senior Bowl. Separately, to get two different perspectives on Fulgham, as the Eagles will often do, Assistant Director of Player Personnel Ian Cunningham also specifically scouted Fulgham at the Senior Bowl.

Ward and Cunningham both liked Fulgham from a character standpoint, and the Eagles were impressed by his engaging personality, family background, energy, worldliness, and intelligence.

• The Eagles did not interview Fulgham again the following month at the Combine, but they were satisfied with his performance there. They deemed his 4.58 40 time as good enough, and liked some of his other measurables, such as his change of direction, redirection, his unique length, big hands, and broad body. They liked that he was big, played that way, and had room to develop because he was comparatively new to football.

• Fulgham would eventually earn a "starter" grade from Vice President of Player Personnel Andy Weidl and the Eagles' scouting department leading up to the 2019 NFL Draft. To note, Doug Pederson said in a recent interview with 94.1 WIP's morning show that the Eagles had a third- or fourth-round grade on Fulgham. The Eagles may have projected him to be picked in Round 3 or 4, however, the Eagles don't grade players by round. Also to note, earning a "starter" grade is a good grade on the Eagles' scale.

In addition to the positive character reviews, the Eagles liked him on the field. They liked his ability to win 50-50 balls, his route skills, his physicality, toughness, and willingness to block.

• Fulgham was eventually drafted in the sixth round of the 2019 draft by the Lions. So why didn't the Eagles draft Fulgham if they liked him so much? In the second round, they selected J.J. Arcega-Whiteside, a player with a similar skill set and body type, though that would not have necessarily eliminated Fulgham from consideration. In the 2020 draft, for example, the Eagles selected three speed receivers in Jalen Reagor, John Hightower, and Quez Watkins, however, they ultimately made 10 draft picks.

In the 2019 draft, the Eagles only made five picks, though it should be noted that their fourth- and fifth-round picks, Shareef Miller and Clayton Thorson, were both cut by the Eagles, landing on other teams (Miller has since returned to the practice squad).

• When the draft came and went and Fulgham landed with the Lions in the sixth round, all of the Eagles' information and analysis on Fulgham, and any other prospect for that matter, stays in the system and continues to get updated with pro evaluations as their careers continue.

• Fewer than five months after they drafted him, the Lions waived Fulgham, who went unclaimed by the rest of the league, and Detroit added him back to the practice squad. He remained there until the Lions added him to the active 53-man roster Week 15 that year.

• During the offseason, the Lions waived Fulgham again when teams were forced to cut their rosters from 90 players to 80 players as a result of the coronavirus outbreak. The Packers claimed him, and then waived him themselves a week later.

• It was around the time that the Packers waived Fulgham that Eagles WR Robert Davis limped off the field during a training camp practice. The Eagles were suddenly in need of another receiver, and the stars aligned. All of the previous work on Fulgham was retrieved, from his college evaluation to his time in the pros, and of course showed the positive reviews the Eagles had previously given him.

Director of Pro Scouting Brandon Brown pitched Fulgham to Weidl, who had his own positive grade on Fulgham in addition to Ward's, and it was agreed that he was the receiver worth pursuing to replace Davis. They discussed Fulgham with Howie Roseman, who put in the claim.

So why not claim him earlier when the Lions initially waived him and the Packers snapped him up? After all, the Packers, having made the NFC Championship Game the previous year, would have been lower than the Eagles on the waiver order.

It was really all about timing. Players who hit the waiver wire when rosters are uber-full during training camp aren't exactly hot commodities. A team need at the position will typically accompany a waiver claim at that time of year.

The Eagles cut Fulgham, too.

• After joining the team during camp, Fulgham had next to no chance of making the final 53-man roster, especially after the team had just drafted three receivers. However, in limited opportunities, Fulgham made his share of plays, and proved that he at least deserved a spot on the practice squad.

If you've seen HBO's Hard Knocks, you've surely seen scenes of high-ranking team officials cutting players, and in some cases, expressing a desire to add them to the practice squad. Usually that's the head coach, but sometimes it's the general manager. In the Eagles' case, it's Roseman.

Because Fulgham had just been waived by three teams in a span of less than three full weeks, there wasn't much of a risk of some other team claiming him, so he was something of a safe player to cut and add back to the practice squad, which the Eagles were able to do.

Fans and media grumbled when at final cutdowns the Eagles waived Deontay Burnett, who stood out in camp, but it was actually Fulgham who was the Eagles' top practice squad priority at wide receiver.

And then he broke out.

• Once the season began, Fulgham consistently flashed in practice, making play after play, or in scouting vernacular, he started "stacking days." While Fulgham deserves the lion's share of the credit for standing out, the team is also happy with the way that new wide receivers coach Aaron Moorehead, assistant wide receivers coach Matt Harper, and Jason Avant were able to help bring him along.

When the Eagles lost a few receivers to injury, they felt that Fulgham was not only worthy of being added to the regular roster, but ready to actually play. In his first real action with the Eagles, Fulgham was thrown in the fire, as he played 60 percent of the snaps against the 49ers, and obviously, he made the play of the night when he hauled in a go-ahead 42-yard TD pass from Carson Wentz.

• As you have seen, Fulgham has been a standout, legitimate No. 1 type of receiver ever since. He leads the NFL in receiving yards since his Week 4 debut against the Niners. Beyond Fulgham's impressive numbers, the Eagles have been pleased with his effort as a blocker, and the mental toughness he showed going into Pittsburgh unfazed by the Steelers' physical defense, and essentially carrying the team in the second half.

Was the addition of Fulgham luck or skill?

However, would the Eagles have added Fulgham if not for their organized scouting structure that is in place? Perhaps as the saying goes, luck is what can happen when preparation meets opportunity.

Similar back-of-the-roster success stories could also probably be written for players like Boston Scott, Jake Elliott, Alex Singleton, and Cre'Von LeBlanc, to name a few, who are all also currently contributing players that the Eagles added from other NFL rosters at virtually no cost.

Anyway, to answer the question in the headline of this article, the answer is, "a lot of people."