Eytan Shander: The tank is on for the Cowboys; should Eagles fans be concerned?

But is it also smart? 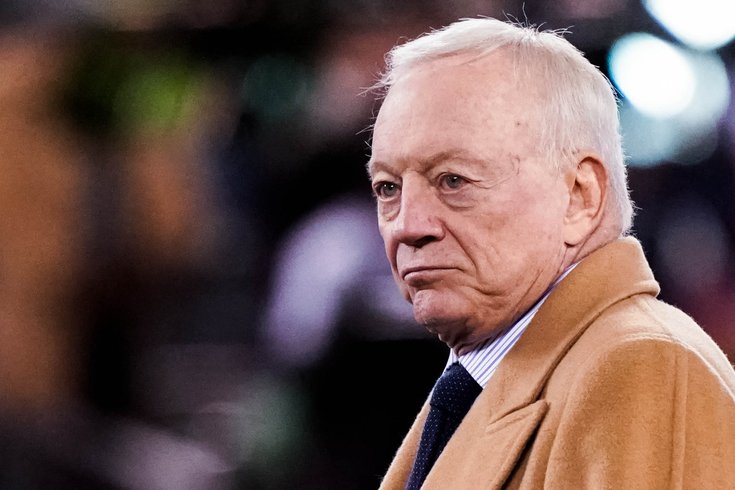 Jerry Jones is a disgrace. Mike McCarthy should have stayed out of football. Mike Nolan is a con artist who stole the defensive coordinator job away from many more qualified candidates. The team we love to hate is in one of the worst tailspins we’ve seen in professional sports. The abomination that is the Dallas Cowboys couldn’t have come at a better time as we hit the “Bye-Week Blues” this week.

Granted, most of the local conversation has centered around if Daryl Morey will trade for James Harden. But we still have a glorious train wreck in Dallas. We simply can’t look away. But what shouldn’t be lost in all of this is an apology – or two – that should come our way.

Dallas is tanking. There really isn’t any other way to put it, and Jerry Jones is going to Cooper Rush his way into a top pick. The NFL should step in and put the same pressure on Jones that they would any other owner. We know all too well how the NBA got involved here with Sam Hinkie. The NFL needs to stop Dallas from stockpiling picks as a result of purposely starting bad talent.

I don’t care if they sign Colin Kaepernick or John Kaepernick, just get someone in there where you can compete. Jones will try and smoke screen his way into the top pick by hiding behind a bad division. His team is too talented – even outside of the mess at QB – to finish in the top three or four worst teams. But Jones has something else going for him that he’s planning on using to his advantage.

The team has quit. It’s an embarrassment to so many South Jersey and South Philadelphia NATIVES who root for the Cowboys. Don’t tweet us. Stop calling our radio shows. No more answering TV polls. Just stay the hell away from our football conversations. Your team is so bad that they’ve taken you out of any barbershop or twitter-shop convos.

Jones knows this. He’s fully aware of how bad things are with his coaching staff. Only Joe Douglas and that bizarre backing of Adam Gase sounded more off base this week. Make no mistake, any backing of McCarthy to Nolan is simply Jones ensuring these appallingly bad coaches remain in place to ensure the tank. For anyone who ever criticized Hinkie and the Sixers – or really any other team who did what they did – and stays silent now is showing their hypocrisy.

Jerry Jones is the fantasy owner who forgets to check his team, or purposely trades away good people when his team is out of it. He’s overseeing one of the worst seasons any team experienced in the history of the league, and we are barely halfway through!

I don’t expect much to happen to Jones, but it’s nice to at least think out loud – and hopefully collectively with you – about how bad this truly is for Dallas. We should continue to rip and destroy everything Cowboys related, but I propose we go on a muting spree.

Blocking is too much as I wouldn’t want you to lose any friends on Twitter. But if you muted the top five or six Cowboys people you interacted with, and continued to destroy Dallas, I bet they wouldn’t even notice. You could run some Phil Jackson mind game on them where they still think you are reading their responses. It’s petty, but so is social media. So is winning the NFC East.

Eagles are off this week so watch The Undoing on HBO. That’s the bet. That if you sit down and watch the first three (3rd airing this Sunday) episodes, you will agree it’s one of the best shows on TV. You only have six episodes total, and Nicole Kidman is amazing. Hugh Grant is creepy, and the rest of the cast works well in their limited roles. I love the story so far and Kidman is fantastic in revealing something through her face, without saying anything.

If you read the preview before watching the first episode, you knew Grant was going to disappear and someone was going to be murdered. You also knew something along the lines of a pandemic was about to happen. Other than that, you really didn’t know much. The first episode does a fantastic job of highlighting the world in which Kidman’s character lives, while allowing Kidman the actress to subtly show her uneasiness about those surroundings. It’s not overt by any means but is just a testament to how strong she is on camera.

After watching the second episode, and seeing them tie in an earlier storyline, I went back and re-watched the first one. The show is amazing. It has a purposefully awkward scene in the first episode, where you are looking at a group of people who are made to feel awkward. But after watching the second episode, that same scene is actually about one person, ironically the only person not made to feel awkward. This type of layered writing and strong acting should continue to make “The Undoing” one of the better shows to come out of HBO.