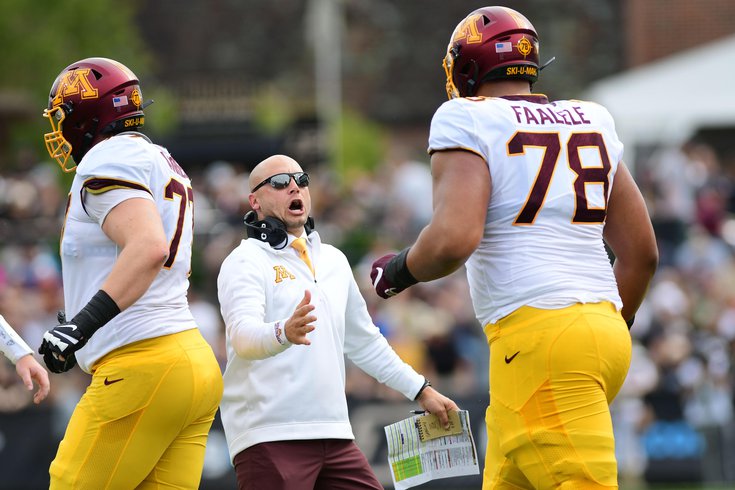 Daniel Faalele is an enormous human being.

There are a bunch of smaller, waterbug WRs poised to enter the 2021 NFL Draft, like Purdue's Rondale Moore, Alabama's Jaylen Waddle, and Louisville's Tutu Atwell, but one of the lesser known guys is Elijah Moore, who already has 42 catches for 575 yards and 2 TDs in just 4 games so far this season.

He's an explosive slot receiver who can make plays down the field, or on quick hitters as an extension of the run game. Here's his performance against Florida this season, when he went off for 10 catches for 227 yards.

We all love Greg Ward, but the Eagles could stand to upgrade at the slot position with a player more capable of making explosive plays.

On a team with a lot of Freaks, this is the most explosive one of the bunch. The 6-5, 257-pound edge rusher didn’t get to go through winter workouts, but he’s in the top five based on his previous numbers and the word from inside the Nittany Lions program. Oweh (five sacks in 2019) has run a jaw-dropping 4.33 40, according to Penn State coaches. He also has vertical jumped 36 inches and broad jumped 10-7 to go with a pro agility time of 4.46, a 380-pound bench press and a 365-pound power clean. His body fat is 4.9 percent.

And, as we’ve said before, you can scoff at some of these amazing numbers, but previous Penn State players (Saquon Barkley, Mike Gesicki, Troy Apke and John Reid, among others) have backed it up at the NFL combine.

As a rotational DE in 2019, Oweh had 21 tackles, 5 sacks, and 2 FFs. He's a raw pass rusher who is winning just with his pure athleticism, but he'll have to develop a more diverse repertoire of pass rushing moves in the pros.

The Eagles have done a nice job developing Josh Sweat, another athletic freak in college, and Oweh is perhaps a healthier version of him.

Wallace isn't the biggest receiver at 6'0, 190, and he might not have blazing speed, but over the last three years at Oklahoma State, he has averaged 109 receiving yards per game in 25 games.

The obvious trait that jumps out is Wallace's ability to catch the ball and immediately transition into a tough runner. He also has a low drop rate, he makes contested catches, and he has exceptional body control, contorting his body to make difficult catches. He's also thought of as a highly competitive player, and a very willing/able blocker. He reminds me of a smaller Juju Smith-Schuster.

I believe that he'll be able to play inside and outside in the pros, which is a nice feature for an Eagles team that always seems to have an abnormal number of injuries at the wide receiver position.

Speaking of injuries, Wallace did have his 2019 season cut short due to an ACL tear in late October. That doesn't seem to have slowed him down much, as he has 320 receiving yards and 2 TDs in 3 games so far this season.

McGrone is a redshirt sophomore who recorded 65 tackles (9 for loss), 2.5 sacks, and a FF in his first season in Michigan's regular defense in 2019.

McGrone has good speed, and he can cover a lot of ground from sideline-to-sideline, or on drops into coverage. He has also shown the ability to time out blitzes, and get to the quarterback quickly.

In the past, the Eagles have shown a preference for linebackers with some safety in their backgrounds. That hasn't worked out so well. Maybe just draft a linebacker to play linebacker?

If his listed measurements of 6'9, 400 pounds are accurate, Faalele will become the biggest human in the NFL when he is drafted. He's huge, he's athletic for his size, oh and HEY, he's a former rugby player from Australia who doesn't have much American football experience! Of course we're going to profile this guy.

Obviously, it appears that the Eagles may have found a gem in Jordan Mailata in the seventh round of the 2018 NFL Draft. Perhaps they'll go back to the Australian rugby pipeline again in 2021. If so, Faalele is going to require a much more valuable draft resource, as he'll likely go Day 2.

It's also probably noteworthy that Lane Johnson has struggled with a bum ankle for multiple seasons now, so the Eagles have to be mindful of the possibility that he may not be a long-term star going forward.