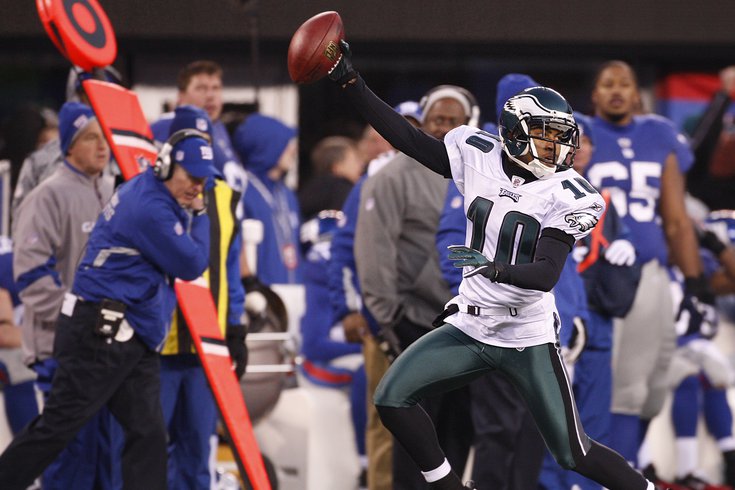 Whenever the Philadelphia Eagles and the New York Giants convene to play football, weird things happen, and those weird things have typically favored the Eagles over the years.

After Thursday night's unlikely Eagles comeback win over the Giants — a win that not only propelled them past the Cowboys in the standings, but also made them the favorites to win the NFC East, according to TheLines.com — perhaps it's worth ranking the Giants' 10 worst 'gut punch' losses to the Eagles over the years.

Does that sound fun? Cool, let's do that.

If we're being honest, the inclusion of the Eagles' 23-20 playoff win over the Giants here is just so that we can remember this guy:

2001 was sort of a changing of the guard at the top of the NFC East, as the Eagles swept the Giants. In their second matchup, trying to clinch the division, the Eagles were down 7 with about 2:33 to go. They quickly drove the field in 8 plays, and Donovan McNabb hit Chad Lewis for the game-tying TD, but left 1:43 on the clock for the Giants to try re-take the lead.

The Giants quickly went three-and-out, punted, and the Eagles once again quickly drove down and kicked a field goal for the lead.

Game over, right? Nope. With 7 seconds left, the Giants ran a hook and lateral play, that got Ron Dixon free. He ran 62 yards before getting dragged down by Damon Moore inside the 5 yard line.

Pregame, the Giants had their hype circle on the Eagles' logo at midfield.

Giants standing on the Eagles logo at midfield for pre-game hype: pic.twitter.com/7uBZ9R32HM

And then they got their assed kicked, 27-0, as the Eagles got their first shutout since 1996.

This was a particularly damaging loss for the Giants, as WR Victor Cruz was lost for the season with a knee injury. In the aftermath, the New York Daily News tried to paint Eagles fans as scumbags who cheer injuries.

As it turned out, the enthusiastically cheering Eagles fan in the photo was cheering the result of the play, not the injury, and was seen photographed taking a knee in concern while Cruz was being attended to on the field.

Philadelphia radio host Mike Missanelli took heat from this game too, when he tweeted, “Hey Giants fans, Victor Cruz is over. Dance to that.” Missanelli later wrote a column for PhillyMag claiming that he did not know Cruz was injured, complete with a weird lede about crack addiction. Anyway, nobody cares what Mike Missanelli has to say, so he doesn't count.

Giants fans will remember Thursday night's game for Evan Engram's dropped pass that would have all but sealed a win. Eagles fans might remember it for Carson Wentz's gorgeous TD throw to Boston Scott to take the lead.

Everyone will remember it for Daniel Jones' run and fall.

The Eagles headed into their divisional round matchup with the favored Giants playing with house money, after sneaking into the playoffs as a result of the 44-6 game, with some help from other unlikely results around the league the final week of the regular season.

The Eagles beat the Vikings in the wildcard round, and then whooped up on the Giants in the divisional round, with McNabb pretending to take a phone call on the Giants' sideline. This is the only video I could find of that. Apologies for the music they added to it.

Before we get started here, there's debate on how many "Miracle at the Meadowlands" games there are. Some say two. Some say three. Some say four. The four in contention, in chronological order:

Personally, I think there are three. On the Simmons TD, the Eagles could have just kicked the FG for the win, and there'd have been no drama, so in that sense it wasn't a miracle. Pre-play, the thinking was, the Eagles are going to win this game, and that's what happened. I do get that it was an oddball way to win a game, but I wouldn't consider it a miracle since the expected result happened.

Anyway, I consider the Westbrook return to be "Miracle at the Meadowlands II."

Do the Eagles win the Super Bowl if the Eagles lost this game? After all, they would have been 1-2. Instead, this game sparked a nine-game winning streak, while simultaneously burying the Giants at 0-3.

As we noted above, the end result was as expected, but it took a wild turn to get there. The best part about this game was Bill Parcells sprinting in to yell at the officials, arguing that the offense can't advance a blocked field goal. He would have been right if it were fourth down, which it wasn't.

Joe Pisarcik, Larry Csonka, and the Giants simply handed the Eagles a win.

The most amazing game I ever saw.