Plus, Hassan Ridgeway is done for the season, but the Birds could be getting some reinforcements 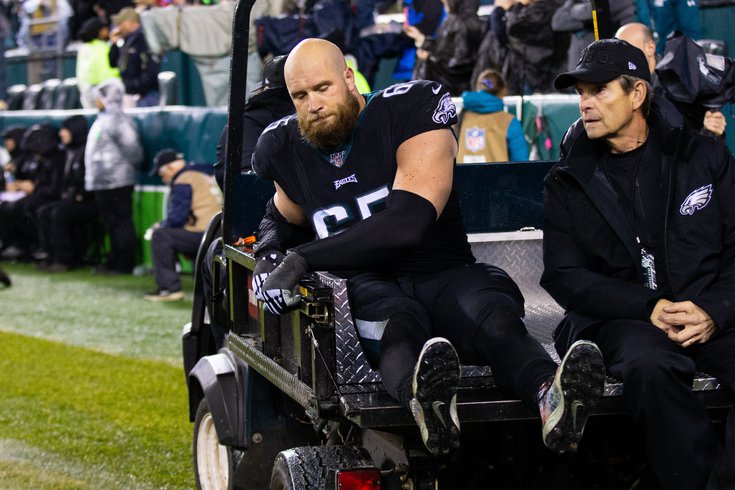 Philadelphia Eagles offensive tackle Lane Johnson is carted off the field after being injured against the New York Giants.

The Eagles may have come away with their second win of the season on Thursday night, but it came at a cost, as injuries continued to mount for the Birds in their 22-21 victory over the Giants, one that not only moved them into first place in the lowly NFC East but also finally moved them to the betting favorites in the division ahead of the Cowboys for the first time all year, according to TheLines.com.

But things will not be getting any easier for Doug Pederson's team, as the Giants game showed the reason why Eagles fans can't bank on the "just wait until X player gets back from injury" plan for a late-season playoff push. Why? Because the two biggest injuries the Eagles suffered in their win were suffered by players returning from other injuries, Lane Johnson and DeSean Jackson.

On Friday, Pederson spoke to reporters about those injuries, and here's what the head coach had to say — as well as the latest reports we've been able to find from around the football world.

According to multiple reports, right tackle Lane Johnson suffered a Grade 1 MCL sprain late in the win over the Johnson, that will likely keep him out, possibly for the next few weeks.

"Lane, again, is going to be a little more day-to-day," Pederson said. "We'll see where he's at next week on him."

That could just be a head coach looking on the bright side, but MCL sprains typically keep players out at least a week. Maybe with the long week before facing the Giants, Pederson believes Johnson could be healthy enough in time — after all, 80% of Lane Johnson might be better than the alternative.

However, being sidelined for a bit might actually not the worst thing in the world for Johnson, and not just because it's not as serious of an injury as it could've been. The time off will also allow Johnson some time to get his ankle right, an injury that caused him to miss the Ravens game, and not be able to finish the previous two games against the 49ers and Steelers. It also appeared that he aggravated that injury early in the Giants game but fought through it before suffering the MCL sprain.

At this point, why rush him back? If Johnson doesn't suit up against the Cowboys in Week 8, he won't have to play again until Week 10, when the Eagles visit the Giants as the Eagles go on the bye follow their game in Dallas next weekend, and would essentially get two and a half weeks off while only missing one game.

The worst part about Johnson knee injury is that it probably shouldn't have ever happened in the first place. With the Eagles trailing 14-10 in the fourth quarter, Doug Pederson opted to go for the touchdown on fourth and goal, attempting a fade route to Hakeem Butler on his first regular offensive snap in the NFL, rather than taking the points. It was on this play where Johnson's knee injury occurred.

While this might not be the biggest injury of the two, it will almost certainly be the more impactful of the two while the player is sidelined. That's because, without Lane Johnson, the Eagles offensive line really falls to pieces. Jason Kelce is already playing through a hip injury — and without Johnson, he's the Eagles only regular starter along the offensive line. With the upcoming schedule for the Eagles being arguably their easiest of the season (at DAL, Bye, at NYG), the Eagles could survive without him, but it's worth wondering if Carson Wentz, already getting hit more than any other quarterback in the NFL, will still be standing when Johnson returns.

The more serious injury suffered on Thursday night was the high-ankle sprain suffered by DeSean Jackson on a punt return late in the game. With Jackson already going to the ground following a penalized leading-with-the-helmet hit, another member of the Giants came in late with a blatantly dirty hit that was not penalized and caused Jackson to get twisted up in the turf, his leg bending backwards beneath him.

This is such a blatant late hit that frankly the refs should be fined for not calling a penalty on this. pic.twitter.com/Rtc7fb39OJ

Almost immediately, it was clear that the injury was bad, as Jackson slammed his helmet on the turf and trainers rushed out to take a look. Jackson didn't appear able to put any wait on it while heading to the sideline and was quickly ruled out for the remainder of the game.

Now, it appears Jackson, who had already missed the previous three games prior to the Giants matchup with a hamstring injury, will be out for a while again after reportedly suffering a high ankle sprain, the same kind of injury that just landed Zach Ertz on injured reserve.

Eagles believe WR DeSean Jackson suffered a high ankle sprain last night but he is undergoing an MRI today to see if he might need surgery, per source.

According to Ian Rapoport, Jackson will also go on IR and will be out "indefinitely," but should have a chance to return this season.

#Eagles WR DeSean Jackson had his MRI this morning and it confirmed the ankle injury knocks him out indefinitely. Philly will place Jackson on Injured Reserve but he does have a chance to return.

On Friday, Pederson confirmed that the team will be without Jackson for the foreseeable future, but didn't get into any specifics about the nature of his injury, a potential timeline for a return or whether or not he's headed for IR.

"So DeSean has the lower body [injury]," Pederson said. "He's going to miss significant time with us."

The fact that Pederson didn't dispute that it was a high-ankle sprain, coupled with the fact that Jackson is going to miss "significant time," is probably about all the confirmation we need here anyway. The good news is, some other weapons like Alshon Jeffery, Miles Sanders and Dallas Goedert could be nearing a return for Carson Wentz and the offense.

• As we just mentioned, a few injured Eagles could be getting close to returning, and Pederson was also asked about this on Friday.

"Obviously, these guys are all rehabbing and working today, working through the weekend, and we'll see where guys like Dallas [Goedert], Miles [Sanders], Alshon [Jeffery], we'll see where they're at in the beginning and really middle of next week. I can probably say that guys like T.J. Edwards are close to returning, Rudy Ford is close to returning, Jason Peters is kind of in that boat.

"But we've got a few days here to really get these guys healthy even more, but I'm hoping that we get a few of these guys next week going into the Cowboys game."

However, as we mentioned at the top of the story — and then explained throughout — it's not like a player returning from injury is immune to getting hurt again.

•  Doug Pederson also confirmed on Friday that defensive tackle Hassan Ridgeway is done for the season after suffering a bicep injury in the win over the Giants. Apparently he said it shortly after I hopped off the Zoom call to write this story, so we'll just have to take Jimmy's word for it.

Hassan Ridgeway is done for the season, per Doug.

•  One of those players Pederson mentioned was linebacker T.J. Edwards (hamstring), who is reportedly expected to be ready for the Eagles' Week 8 matchup against Dallas.

#Eagles are expected to get LB T.J. Edwards (hamstring strain) back next week vs. #Cowboys, so at least some positive injury news for the team.

Edwards has missed three straight games and would be a nice addition to the middle of the Eagles defense, where linebacker has been one of Jim Schwartz's unit's biggest weaknesses this year.