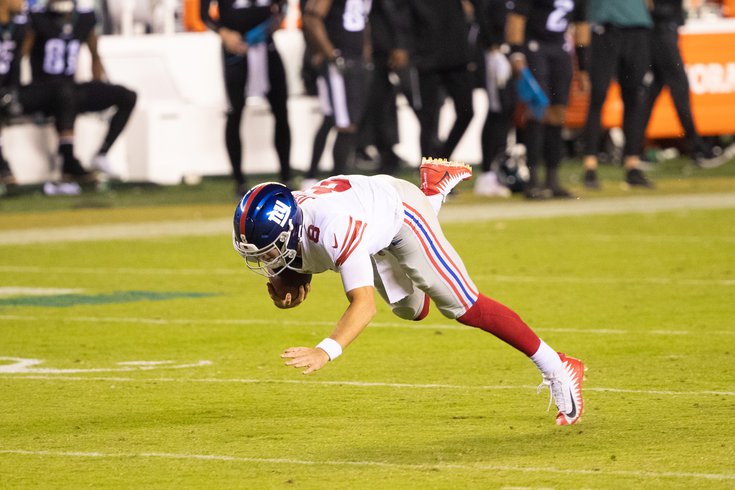 The Philadelphia Eagles are bad. Luckily for them, the New York Giants are worse! In a predictably sloppy matchup between two teams in the NFL's worst division, the Eagles eked out a 22-21 win in a game they deserved to lose. As always, win or lose, we hand out 10 awards.

Doug Pederson has been a really good coach for the Eagles over the last three-plus seasons, but he has had his down moments in 2020, and this was his worst game in a long time.

To begin, his play calling in high-leverage moments was just... odd.

Add in that he was unable to throw the challenge flag in time after the Giants were clearly short of the line to gain in the Eagles' red zone (that's not totally on Pederson), and it was just an awful night for Doug, despite the win.

When you're playing one of the worst teams in the NFL, it's imperative that you do not gift them turnovers, and that's what Wentz did deep in Giants territory. The following was just a head-scratching throw that was picked off in the end zone by James Bradberry.

James Bradberry is having a YEARpic.twitter.com/80PDipy8MI

Seriously, what is that? He was also lucky that a silly throw across his body — and across the field — wasn't disastrous.

Of course, Wentz is also capable of making spectacular plays as well, and he had his share of those. His best throw of the night, and maybe the season, was on the game-winner to Boston Scott.

Great throw, great catch. Wentz has been a clutch performer indeed late in games this season, and the Eagles were finally able to pull out a win in one of his comeback efforts.

Of course, the Eagles wouldn't have been in position to win this game if not for Evan Engram's inexcusable drop that could have sealed it.

Evan Engram drops a perfect pass from Daniel Jones on 3rd down...

The Eagles get a chance to win 👀

Even Eagles receivers were like, "Wow, that was a bad drop."

This will rank somewhere below his strip sack of Tom Brady in the Super Bowl, but BG comes up with big plays in big spots.

Graham is up to six sacks so far this season, by the way. That more than puts him on pace for his first double-digit sack season, which is crazy for the kind of really good player he has been over the years.

Some folks were worried about Elliott's mindset after missing three 50-plus yard field goals earlier this season. I guess the bar is raised for NFL kickers these days.

Against the Giants, though, he missed, dare I say, a 29-yard layup.

Elliott has been a fantastic kicker for the Eagles and isn't going anywhere, but, ew.

DeSean Jackson suffered an ugly-looking leg injury in his first game back since Week 3. He was carted off.

And more importantly, Lane Johnson not only struggled with his ankle all night, but he also had to leave early with a knee injury. The Eagles' offensive line by the end of the night:

The Eagles had their sixth different starting five offensive line combination in seven games. They are likely to have the seventh combo in eight games in their next matchup against the Cowboys.

This game will be remembered for the following play, that just epitomizes the NFC East.

It's terrible defense, in that there's such a wide open lane for Jones to run through, you have Nickell Robey-Coleman giving up on the play at around the 50 yard line, and Jones, who as you can see is a legitimately impressive athlete, just falls on his own. We'll remember this play for years.

The "Miracle at the Meadowlands Games I, II, and III, the Jake Elliott 61-yard field goal, the Clyde Simmons blocked field goal TD, and now this.

Has another team in the NFL suffered as many gut punch losses to a rival as the Giants have to the Eagles? Maybe we'll go a little deeper on that one during the quasi-bye this week.

Behold, your Philadelphia Eagles, kings of the glorious NFC East (for now).