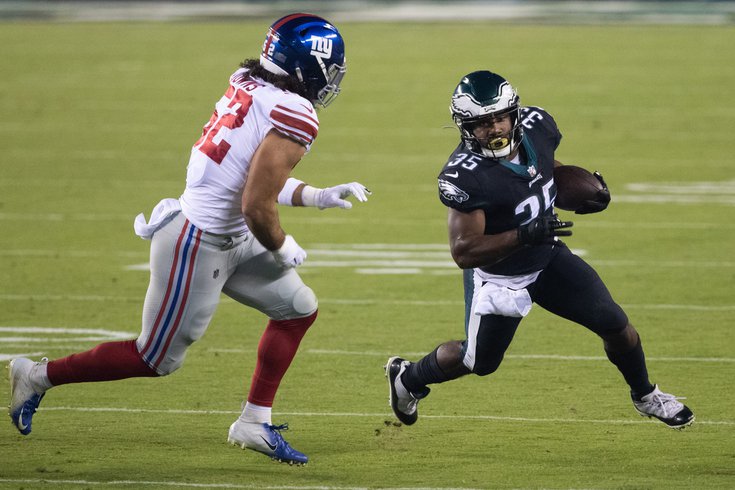 Philadelphia Eagles running back Boston Scott had another big game against the Giants.

Snatching victory from the jaws of defeat, the Eagles somehow came up with a victory over the Giants on Thursday night, with Carson Wentz leading a double-digit comeback in the final five minutes for a 22-21 victory.

• This team did not deserve to win this game for the way they played on Thursday. The defense wilted, Carson Wentz was out of sorts for 2/3 of the game or more, the offensive line stunk, coaching was terrible, and their biggest saving grace was being up against an opponent which was just as stinky as it was. But credit where it's due — with the game in the balance and the Eagles in need of someone to step up in crunch time, Wentz rallied the troops and got it done.

It started with a deep bomb to John Hightower late in the fourth, eating up a huge chunk of yards and putting the Eagles in position to score and score quickly. After finding Ward for the touchdown shown higher up the article, the offense had to wait and see if their defensive counterparts would come through.

They seemed to fall all over themselves even as they marched down the field, and a Jason Kelce penalty inside the five would have been an all-time screw up if they let it decide the game. But it was at that time Wentz uncorked one of his best throws of the game, a beauty down the sideline to Boston Scott for the game-clinching touchdown.

This team still isn't good. But a win is a win, and a double-digit comeback in the final five minutes is nothing to sneeze at.

• Did I see Nate Gerry come up with a sack or was I hallucinating during the second half? I wasn't the only one to see this, correct?

• Travis Fulgham is the guy who has gotten the most press in the receiving core recently, and rightfully so, but Greg Ward deserves a lot of credit for building on a strong finish to last season. A lot of people have made this comparison recently, but he's turning into a Jason Avant like player for the Eagles — not a lot of big or explosive plays, but he always seems to be open when Wentz needs him the most on third down.

It should surprise no one that Ward was the guy who came up with the touchdown to keep Philadelphia alive late in the fourth quarter. Coming off of some pre-snap motion, Ward coasted past the Giants for a quick score:

Hold up wait a minute. Y'all thought they were finished?

Like Ja Rule, he's not always there when you call, but Greg Ward is always on time.

• While we're on the topic of Fulgham, it seems impossible that they plucked him off of the scrap heap in late August. He has pretty much everything you want in a top-two receiver, with size, good hands, toughness, and the footwork to tie all of that together.

• The defensive line went missing for most of the middle portion of the game, but between two forced fumbles from Brandon Graham and Josh Sweat, I suppose they lived up to their end of the bargain.

• The Eagles came out of the gates with the guns blazing, using tempo to keep the Giants out of sorts and Carson Wentz in a rhythm. Someone is going to have to ask Doug Pederson why it wasn't used more after that drive because the offense didn't exactly set the world on fire from that point on.

On some level, I get it. Being fast and bad isn't a good thing, as most of us learned the hard way during the Chip Kelly era, and if you play with tempo for a full game, that makes you even more predictable. But this fits into a seasonal theme of getting away from the things that are working.

When the run game is cooking, the Eagles go away from it. When designed rollouts work, the Eagles never use one the rest of the game. The only thing they seem to have increased once it proved to be effective was the zone-read, with Wentz showing his legs are a force to be reckoned with again. Even that has had its limits — Pederson has gotten way too overzealous with it in the red zone.

Pederson just doesn't seem to have a great feel for the ebb and flow of the game this season, which is a bit baffling when you consider how good he was at it in previous years. Let's run through a few particularly weird decisions:

What are we doing here? I don't know what he's seeing or doing this season, but I don't like it. The guy who greenlit the Philly Special in the Super Bowl feels like he has completely disappeared. We get brief doses of creativity and a whole lot of nonsense otherwise.

(The Giants got away with pass interference on the Butler play, not that it justifies the poor play call.)

• After a strong start to the Jordan Mailata era, the shine came off a bit on Thursday Night Football. Wentz didn't help himself with some poor decisions in the pocket, but he was getting overwhelmed by pressure throughout the game, much of it coming from the side with Mailata and Sua Opeta working together.

Mailata has been a nice story, but Thursday night was a reminder that's all he is at the moment, rather than a surefire long-term answer. I think he should play more even as they get healthier to see if he can turn into something more, but they're going to have to live with some more growing pains.

• I like Philadelphia's broader use of Jalen Hurts, but they're going to have to get him involved as a passer if they want to keep defenses honest. When they tried to run an option with Hurts in the red zone in the second half, the Giants never bit, and I suspect that's going to continue to be the case if they don't diversify the looks when he is under center.

• If it was not clear before this game, it should be clear after the game — this is a team that is not seriously threating anyone or anything, and they should be holding an "All vets must go!" fire sale in advance of the deadline. Things are going to get worse before they get better, and the only question is whether they approach the future with a long-term lens and cut into the time they're going to be rebuilding.

It's fair to question whether they have the guy in charge who should be leading a rebuild and making these changes, of course. Roseman's recent draft history is atrocious, and even his big point of strength, managing the salary cap, looks to be dwindling. As one example, if the Eagles wanted to move on from Jake Elliott within the next two seasons, they would have a dead cap hit of nearly $5.5 million (and $7.9 million if they decided to do so this year.)

Even if they win this terrible division, this group is going nowhere. They can learn something about the younger guys they have by playing them a lot this season, and perhaps you can even get Hurts on the field in something beyond a gadget capacity, not to demote Wentz but to see what you have in a lost season. Just don't fool yourselves into thinking they deserve anything but the Old Yeller treatment.

• Don't let all the offensive ranting fool you, this was a piss-poor effort from the defense for the entire second half. New York has been near the bottom of the league in most major offensive categories, and they looked like a crap-tier offense for the first 30 minutes of the game.

The defensive line I have praised all season (and who looked good in the first half) fell to pieces in the second half, gashed on the ground and ineffective attacking Jones in the pocket. Things were just as bad in the secondary, with weak tackling from their slot corners letting the Eagles down all over the field. You could argue they were screwed over by some shaky officiating, but if you're complaining about the refs while not being able to stop this garbage offense, you've got bigger problems.

• I'm not sure who should be more embarrassed on the long Daniel Jones run from midway through the third quarter, Brandon Graham or Jones himself. Graham bit about as hard as a defensive end possibly could on the zone-read, and Jones had nothing but paydirt in front of him when he tripped and fell on his face deep in Eagles territory.

I think Graham is the "winner" here, because Jones' team still ended up punching it in for six points in the lead to finish off the drive. Easier to laugh about how badly you screwed up when your team gets it done.

By the way, shouldn't Philadelphia's secondary be embarrassed by this play? I know Jones is a good athlete, but he is comfortably outrunning every guy in the secondary until he falls down. I have my gripes with him, but at least Jalen Mills is making an effort to track him down and make a play to the very end. Go back and watch Nickell Roby-Coleman — he's the guy with the best shot at making a play and basically quits midplay, starting his slowdown around the 45-50 yard line. When they review the tape for this one, he is going to get ripped to shreds.

• I repeat, the Giants got away with blatant PI on the fourth-down play to Butler in the fourth quarter. Doesn't make the stupid play call any less stupid.

• Relying on DeSean Jackson to play a considerable role for this team was, once again, a pretty huge mistake. Hope he is okay after limping off the field late in the game, but this is sort of who he is. No reason to be surprised by it.

(Cheap shot by the Giants' second tackler that hurt him, it should be noted.)

• Nothing sums up the 2020 Eagles like picking up an OFFENSIVE FACEMASK penalty inside the five with a chance to win the game.