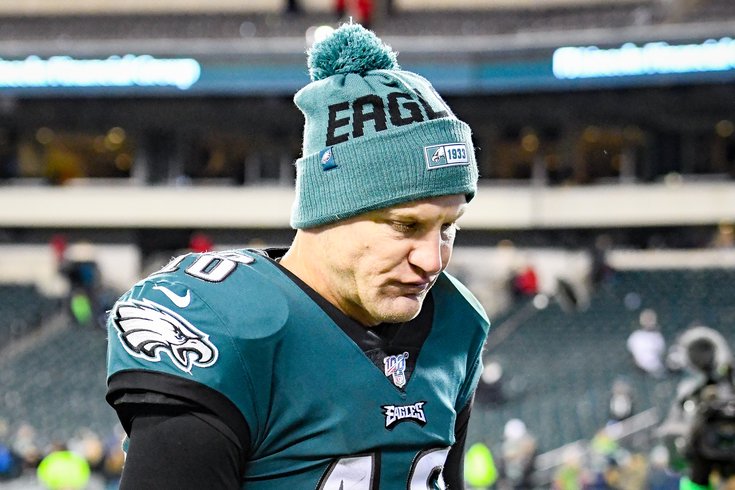 Quarterback Josh McCown walks off the field after the Philadelphia Eagles wild-card loss to the Seattle Seahawks.

Josh McCown was already socially-distanced from the Eagles and the divorce became official last week when the Houston Texans lured McCown with a two-year contract, the latest NFL team to decide it wanted the now 41-year-old veteran around to mentor a young quarterback.

There still could be a reconciliation down the road when McCown finally calls it a career, however. According to CBS Sports' Jason La Canfora, McCown remains on the Eagles' radar as a potential quarterbacks coach or offensive coordinator after he retires, and Philadelphia is among a handful of teams that believes McCown will be an NFL head coach within three-to-five years after his playing career ends.

Josh McCown agonized over more to Houston.Texans lured him with a two year deal and chance to stay home https://t.co/61Vb4EbUVY

If that is the plan, however, it just got more complicated for the Eagles because the Texans are also one of those organizations who believe McCown will become a head coach, according to our sources, and have effectively stolen the inside track from the Eagles.

Texans executive Jack Easterby is mulling the path forward right now and while he has the New England/Bill Belichick stamp on him, Easterby also has identified McCown as someone he wanted around the face of his franchise, Deshaun Watson.

What that looks like in 2021 is anyone's guess but there is little question that Easterby wanted McCown in his building not only as a traditional backup but also in an attempt to convince him to join the coaching staff at some point.

The Eagles already tipped their hand with that by broaching a move to their coaching staff with McCown during his exit interview after last season, something turned down by McCown after the euphoria of making his playoff debut and nearly pulling off an unlikely upset over Seattle while playing with a torn hamstring.

McCown simply wasn't ready to give up on his playing days despite being nearly as close to social security as his rookie season of 2002 when he was a third-round pick by the Arizona Cardinals out of Sam Houston State.

Philadelphia wanted McCown so badly last season that the organization bent over backward to get him into the NovaCare Complex, first luring him out of retirement when projected backup Nate Sudfeld went down with a broken left wrist in the preseason. To do that, the Eagles allowed the veteran to travel back to Charlotte on Fridays where he was mentoring his son as a high-school football coach.

McCown would then head back to Philly or whatever city the Eagles were playing in for game days and the team had to cash in on the insurance policy back in January during the playoffs after a Carson Wentz concussion. Despite tearing his hamstring in the second quarter against the Seahawks, McCown fought through it because Sudfeld was inactive and the Eagles had no other option.

It didn't work out, of course, but McCown's respect and affinity inside the organization only grew and he was very emotional after the setback as the oldest QB in NFL history to make his postseason debut. McCown quickly fell in love with the Eagles and vice versa as everyone from Jeffrey Lurie on down saw the positive impact he had on Wentz.

With McCown obviously near the end of the line of his playing career, however, Howie Roseman went in a different direction when it came to the backup QB position, selecting Jalen Hurts with the 53th overall pick in the draft. That was only after the organization discussed adding McCown to the coaching staff in an effort to extend his stay but McCown wasn't about to play the entry-level game when playing was still on the table if the hamstring responded.

McCown and his family moved back to his native Texas in the offseason and when the COVID-19 pandemic devastated the country it opened another door. He became the first socially-distanced signal caller in league history tucked away in East Texas and communicating via Zoom and MS Teams just in case an outbreak hit the QB room in Philadelphia.

The contingency wasn't needed through the midway point of the 2020 season and the Texans, who've gone through an awful first half lured McCown off the Eagles PS.

From all accounts, the idea of coaching was discussed by the Eagles in a general fashion with McCown and never got past anything more than a cursory conversation. That was obviously before the offensive staff changes were made at the "recommendation" of Lurie. McCown in theory could have fit in as a quality control coach, a position coach — either quarterbacks or receivers — and even the OC, although that would have been a stunning decision to bypass not only an outside voice, which has been a narrative, or in-house candidates like Duce Staley and Press Taylor.

They should have jumped into the deep end of the pool and offered McCown the OC job.

Remember the hierarchy in Philadelphia in that Pederson is the real OC who allows each of his positional coaches to have their fingerprints on the game plan with the final filter between him and the rest of the offensive coaches being Taylor right now, the QB coach and passing game coordinator.

Because Pederson is the play-caller, the Eagles could have offered McCown the job with a learning curve already baked in, same as it is for Taylor, who will likely be the next OC.

Rewind to January and starting the clock on a coaching career made sense from both sides but McCown also proved to himself and the rest of the NFL that he is still a top-tier backup, something that carries with it a far bigger paycheck than any entry-level assistant job which would be the conventional first step.

As for brushing off McCown jumping right to OC, remember that the Eagles pride themselves on having the reputation as a forward-thinking organization that will go outside the box which is why a candidate like Southern Cal OC Graham Harrell was also considered.

There's a strange narrative in sports which I first encountered covering the NBA when Derek Fisher was named the head coach of the New York Knicks, fresh off a nearly two-decade playing career as the floor leader with some of the best teams of the generation. So many piled on the Knicks for hiring a coach with "no experience," as if actually playing the game successfully at the highest level wasn't an important part of understanding it.

Fisher was by no means a success but then again no one else has been able to turn around the Knicks either.

At its core, coaching is about teaching and the first part of that equation is understanding the subject matter. Admittedly, the much more difficult aspect is dispensing that knowledge so others can understand and excel with it.

By all accounts, McCown is a great communicator and there is a reason others have tabbed him as a future coaching star so breaking from convention and not forcing him to pay his dues after a nearly two-decade career could have been spun as innovative, a tag Lurie is always chasing.

More so, McCown has seen and done it all over nearly two decades and 12 organizations, in the guts of game planning at the highest level for nearly two decades and far more than 32-year-old Taylor, who is "ahead" of McCown when using conventional thinking. The truth is Taylor was still in quality control with the Eagles in 2015 and an assistant position coach as late as 2017 when McCown was on Year No. 16 having seen the sausage being made in 10 different buildings.

Lurie shouldn't have forced Doug Pederson to fire Mike Groh because that's who his Super Bowl-winning coach wanted but once the owner went down that path he should have directed things toward McCown, the kind of decision which would have energized much of the fan base and propped up Lurie's own ego for its brashness.

It also would have put McCown on the fast track to the big chair and forced him to reevaluate his decision to continue playing at 41.

There's always the chance that McCown makes the same decision, but that kind of offer would have given him a lot more to think about and ultimately shut down any competition for his services if accepted, at least until the rivals like the Texans came calling for their next head coach.

John McMullen is the NFL Insider for JAKIB Media, the host of “Extending the Play” on AM1490 in South Jersey and also contributes Eagles and NFL coverage for SI.com. You can reach him here. Follow John on Twitter here.