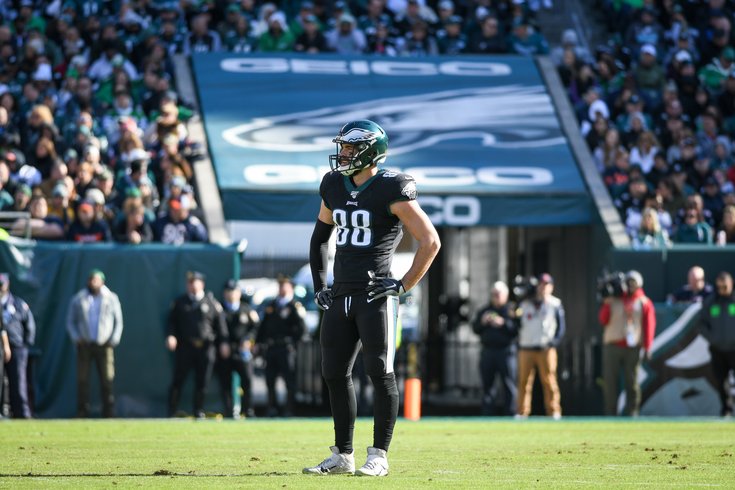 Dallas Goedert during the Philadelphia Eagles game against the Chicago Bears at Lincoln Financial Field in Philadelphia on November 3, 2019.

It has only been 19 days since the Philadelphia Eagles played the New York Giants on Thursday Night Football, so we're not exactly covering new territory in our five matchups to watch this week. Last time around, we identified these five matchups:

This week — with the Eagles favored by 3.5 points according to TheLines.com's consensus odds, we'll try not to be too repetitive of some of the things we pointed out last time around, with one exception.

1) Carson Wentz vs. his inner instincts to play 'hero ball'

There was a time when you could hand-waive away some of Carson Wentz's turnovers because he was trying to make a play, since he made so many impressive off-schedule plays. Those days are over, as the highlight reel plays have become few and far between, while the turnovers have skyrocketed.

Wentz leads the NFL with 16 total turnovers (12 INTs, 4 forced fumbles), and his poor decision-making nearly cost the Eagles a game against an awful Dallas team. His first fumble in that game was simply an unacceptable football play:

BALL IS OUT!@dallascowboys jump on the Carson Wentz fumble!

Wentz held the ball from snap to throw for about eight seconds, before getting hit by a defender he could clearly see coming, while holding the ball carelessly. Not to mention, he was already out of the pocket, and could have easily just thrown it away if nothing was there, again, after almost eight seconds!

It has to stop. Last season, Wentz carried the team on his back the final quarter of the season to get to the playoffs, while surrounded by practice squad guys. This year, his surrounding pieces are playing better than him. He needs to understand when to carry, and when to manage the game. The time for the latter is now, as he cannot continue to commit stupid turnovers against inferior opponents.

2) The Eagles' rushing attack against the Giants' rush defense

Miles Sanders is likely to return to action against the Giants this week, which would give the Eagles' offense a huge boost, given Wentz's struggles. There has been a notable difference when Sanders has been able to play, and when he has not:

The Eagles don't like running the ball against the Giants, because they're big up front, with Leonard Williams (6'5, 302), Dalvin Tomlinson (6'3, 312), and Dexter Lawrence (6'4, 342). In their last three games against the Giants, all wins, the Eagles ran it with their backs 71 times, which sounds like a decent amount, but really wasn't, since they ran 244 total plays. Ultimately, they only ran the ball with their backs on 29 percent of their total offensive snaps.

And that makes some sense, given that the Giants allowed 3.9 yards per carry in 2019, and are allowing 3.7 yards per carry in 2020. But at some point, you have to get the ball in the hands of your really good running back. Just 29 percent isn't enough for a team with a struggling quarterback.

3) Dallas Goedert vs. the Giants' linebackers and safeties

In the past, Zach Ertz has always feasted on the Giants' defense. His numbers against them since the Eagles' Super Bowl season in 2017:

As you can see, while Ertz hasn't exactly had impressive yards per catch numbers in this matchup, he has caught passes in bulk and has been a major presence for the Eagles in the red zone. Hell, even Richard Rodgers had six catches for 85 yards against the Giants a few weeks ago with both Ertz and Goedert out.

Goedert played against Dallas Week 8, but did not look 100 percent. He should be much healthier for this matchup, and if the Eagles are going to pass the torch from Ertz to Goedert this offseason, it would be good to see Goedert step up against a team that has given up so many plays to Eagles tight ends over the years.

One of the matchups that we profiled last time around was Travis Fulgham vs. James Bradberry, on the belief that Bradberry would follow Fulgham most of the day. That didn't really happen. This week, no matter what the Giants do, the Eagles would be smart to attack CB Isaac Yiadom, who is starting opposite Bradberry as a result of a slew of injuries and other oddball situations (like DeAndre Baker being cut, Sam Beal opting out, etc.) at the Giants' cornerback position.

Yiadom struggled against the Football Team on Sunday:

James Bradberry was only targeted against once. I wonder why…

The Football Team not only had success targeting Yiadom, but Yiadom also proved ineffective trying to fight through blockers in the quick WR screen game, and as a tackler.

Whether it's Fulgham or Jalen Reagor, whoever draws Yiadom from play-to-play should be the Eagles' focus of attack, assuming the Giants don't bench him for someone else between now and gameday.