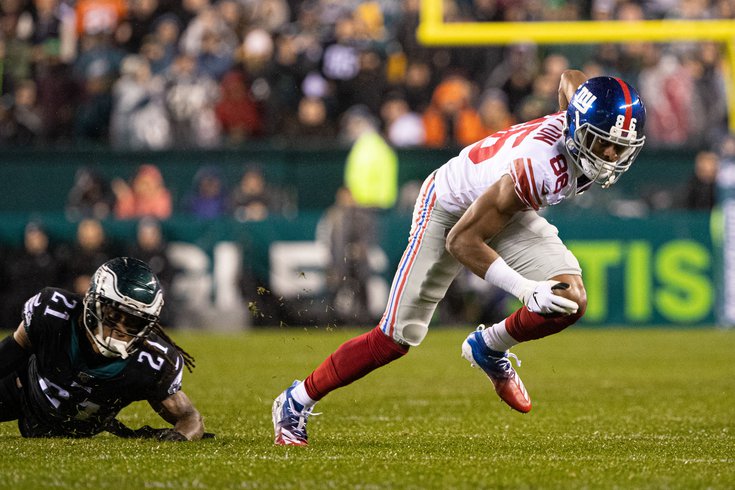 Darius Slayton won't have Ronald Darby to pick on anymore.

The Philadelphia Eagles have owned the New York Giants in recent years, as they have seven straight wins over their division rivals. They have also taken 11 of the last 12 matchups, and 20 of the last 24.

The Eagles' ownership of the Giants is in jeopardy this week, as the Giants are coming into Philly perhaps with some confidence after picking up their first win of the season (albeit against the equally bad Football Team). The Eagles are current betting favorites, at -4.5, according to TheLines.com's consensus odds. Here are our five matchups to watch.

1) Daniel Jones vs. Carson Wentz, on the turnover front

Did you know that there is a strong correlation between winning the turnover battle, and winning games in the NFL? Well, I did the research, and it's true!

In the past, Wentz has always struggled with fumbles, but he had done a nice job of keeping his INT count down until this season. Jones, on the other hand, has been a turnover machine from Day 1.

Despite only becoming the starter Week 3 and missing two games late in the season as a rookie, Jones tied for second in the NFL with 23 total turnovers (12 INTs, 11 fumbles lost on 18 total fumbles), behind only Jameis Winston. A look at his turnovers, game-by-game, since he entered the league:

As you can see, Jones has had at least one turnover in every game he has played, with the lone exception being a Week 16 game against the Football Team.

The Eagles have the second-worst turnover differential in the NFL, at -7, and only five teams in the NFL have fewer takeaways. They must find a way to take the ball away from an offense that is extremely prone to coughing it up.

The Giants' cornerback position was a mess entering the season, after they released DeAndre Baker in the wake of his offseason arrest, and lost Sam Beal to a COVID opt out. The exception has been James Bradberry, who has been a rare free agency hit by Dave Gettleman.

On the season, Bradberry has a pair of INTs, and he is tied for the NFL lead with 10 pass breakups, while mostly trailing the opposing offense's best receiver.

The Eagles' best receiver so far this season has been Travis Fulgham, of course. Even if DeSean Jackson and/or Alshon Jeffery return to action this week, the Eagles' best receiver is still probably Fulgham, who has shown more in three games (18 receptions for 284 yards and 3 TDs) than Jackson or Jeffery have shown since the start of the 2019 season.

Fulgham (6'2, 215) is also just a logical matchup choice for a bigger corner like Bradberry, who goes 6'1, 212. In fact, Fulgham's and Bradberry's measurables from their respective NFL Combine performances are quite similar:

It will be interesting to see how Fulgham responds to the added attention he is no doubt going to garner the rest of the season by opposing defenses.

The other WR vs. CB matchup to watch in this game is Darius Slay vs. Darius Slayton. HEY their names are similar!

Looking forward to one of the great name matchups in football history.

So the Giants will have a TON more.

Like Bradberry above, Slay has been a quality offseason acquisition for the Eagles, who has also trailed the opposing team's best receiver when it has made sense.

In this matchup, it makes sense for him to trail Slayton, who is clearly the Giants' best receiver. Slayton leads the Giants by a wide margin in every statistical receiving category, and he has all three of the team's receiving touchdowns.

Yes, the Giants only have three passing touchdowns this season, and holy crap those yards per reception numbers, Slayton aside, are brutal.

Two notes on the above video:

4) The Eagles' pass rush vs. the Giants' offensive line

After two dominant performances against the Bengals and 49ers, the Eagles' pass rush was quieter against the Steelers (who made it a priority to get the ball out quickly), and the Ravens (who employ Lamar Jackson and run the ball a lot).

They must get back to being dominant against a Giants offensive line that just isn't good. A quick look:

• LT Andrew Thomas: Actually, Thomas was benched briefly last Sunday after missing a team meeting on Saturday, and another rookie, Matt Peart, filled in. To be determined if Thomas or Peart will start on Sunday.

• LG Will Hernandez: Hernandez was a high second-round pick of the team in 2018, and after a decent rookie year, he looked like he could potentially be a long-term quality starter. He has not been that since.

• RG Kevin Zeitler: Long-time quality guard in his ninth season at the age of 30.

• RT Cameron Fleming: Really more of a depth guy who the Giants are forced to start because they don't have anyone better.

The strength of the Eagles' team is their defensive line. This is game in which they have to earn their lofty contracts.

5) The Eagles' linebackers vs. a team not super well-equipped to exploit them

While the Eagles' biggest strength is their defensive line, their roster's biggest weakness, as we've all seen, is their linebackers. Fortunately for them this week, unlike against the Steelers and Ravens, the Giants aren't well-equipped to exploit them.

Against the Ravens, Jalen Mills mostly covered Mark Andrews, the Ravens' tight end who plays more like a wide receiver. Against the Giants, it feels likely that Mills will once again draw a similar responsibility against "kind of a tight end but not really" Evan Engram.

As for the Giants' run game, with Saquon Barkley out, Devonta Freeman is their new starting running back. He is averaging 3.2 yards per carry, and Daniel Jones is the team's leading rusher.