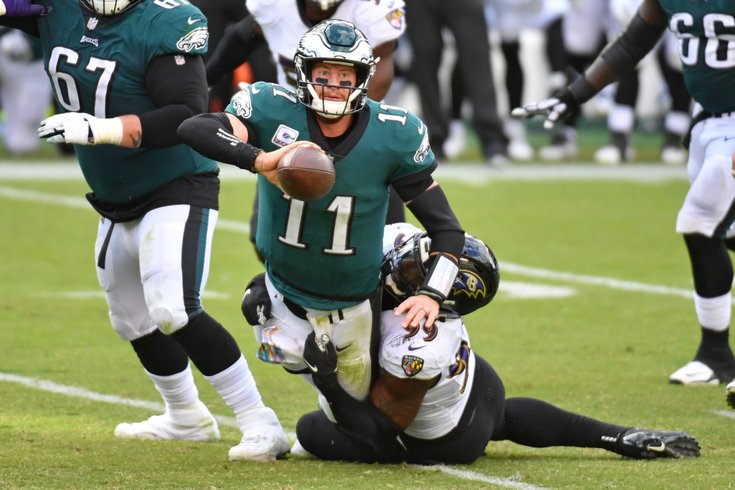 It's Week 7 of the NFL season. The Eagles have exactly one win. And somehow, this weekly post is still relevant.

The NFC East is historically bad, and as such the Eagles can take first place Thursday if they handle the Giants — a team they're currently favored to beat.

With the aforementioned Giants and Washington Football Team each looking like eventual top-10 pickers in the 2021 NFL Draft, and the Cowboys — well, if anyone watched Monday Night Football they know they Cowboys are a disaster too — the Eagles could be the best team in the division and there could still be money to be made by betting on them to turn it around.

So, since it's still apparently way too early to call it a wrap on the 2020 season (even with the Eagles posting a 1-4-1 record), let's take a look at the latest future odds and player props from TheLines.com, from postseason chances to award winners and season stats as we turn the page to the Eagles upcoming match up at home against the Giants, a game in which the Birds are currently favored to win for the first time since they faced the Bengals.

Really all you need to know for this section is that the NFC East is a combined 5-18-1. That ridiculous tie Doug Pederson settled for a few weeks ago, well, it actually might pay off.

After starting the week with +120 odds to win the division, the Eagles lost some ground, perhaps at the expense of the Giants who got their first win. According to TheLines.com, BetRivers now has them at +135. That's just about what their odds were before the season started.

A win against New York on Thursday Night Football would put the Eagles, perhaps briefly, in first place in the division. Which is why, if you have confidence in the Birds, this might be the best time to get in on the action before they wind up with the best NFC East odds in a few days.

At the beginning of the year, we had Carson Wentz's MVP odds listed here and it was a reasonable expectation that he would at least stay in the race for a large part of the regular season. His odds have plummeted every single game, but somehow, surprisingly as players names have been taken off the board at TheLines.com left and right Wentz remains, with extremely long +20000 odds. I wouldn't bet it, but you never know...

We also previously looked at Jalen Reagor's odds for Offensive Rookie of the Year, which opened at +2800 according to TheLines.com. But the Eagles placed him on IR on a few weeks ago after he injured his thumb against the Rams back in Week 2. He's likely out until at least November, and will be lucky to finish with double-digit games played this season.

Miles Sanders has played very well, but his injuries have ended any chance he has at winning Offensive Player of the Year or MVP himself.

[Note: For comparative purposes on the percentages, the Eagles are currently 37.5% of the way through their season, so if a player is above that, they're on pace to exceed their total.]

Just when Sanders caught up with the pace he needs to eclipse the over, he gets hurt again. If he misses just one or two games, there's still a chance he can get close to 1,400 yards in 12 or 13 games played — but he'll need to bounce back from his latest knee injury fairly quickly.

It took six weeks, but Wentz finally posted a multi-touchdown, no interception game. If he can piece together a few more of these he might reach the oddsmakers' goal. Wentz needs to throw 20 touchdowns in 10 games, which is a reasonable expectation for a franchise quarterback. He should, eventually, be getting some weapons back (like Jalen Reagor, DeSean Jackson, Zach Ertz and Dallas Goedert). That will certainly help.

Ertz will miss a month with a high ankle sprain. Is it possible he returns for the last six games and catches a touchdown pass in each of the six? Sure. But I wouldn't bet on it.

The Eagles win total projection has steadily dropped as they've lost. It went as low as 6.5, according to TheLines.com, before the prop bet was taken off the board entirely. It's probably safe to say that a 9-1 stretch to finish the season is not in the cards.