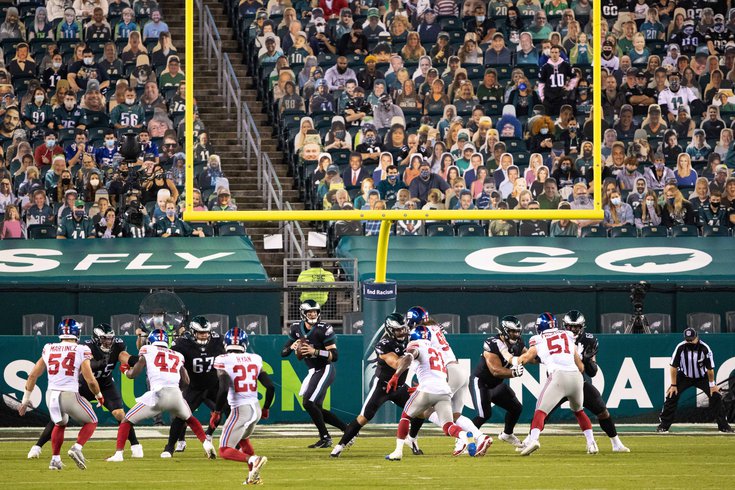 Philadelphia Eagles quarterback Carson Wentz drops back to pass in front of fans and cardboard cutouts during the team's first matchup against the New York Giants.

After a week off to try to figure this thing out, the Philadelphia Eagles will return to the field on Sunday to face the New York Giants for the second time in a month, this time at MetLife Stadium in East Rutherford.

The first meeting between these two teams didn't go the way many expected, with the Giants nearly stealing a win from the Eagles and denying them first place in the division. It's been the same story in each of their three wins this season, with the Birds allowing a lesser team to hang around before ultimately pulling through late in the game.

It would certainly be nice to avoid that this time around.

Unfortunately, after seeing how closely these two teams matched up in Week 7 — plus the fact that it's a home game for the Giants — the oddsmakers have tightened the gap for Sunday, with the Birds currently a 3.5-point favorite, according to TheLines.com. But with the Eagles hoping to get some players back from injury for this one and an extra week to prepare, perhaps for the first time this season Doug Pederson's team won't play down to the level of its opponents. Of course, there's an argument to be made that they're incapable of playing better and are simply a bad team.

With a convincing win on Sunday, maybe the Eagles can inspire some confidence that they are indeed the best of this division. If not, there are going to be a lot of questions come Monday about whether or not this team is really on its way to a second straight NFC East title.

So how do our writers see this weekend's matchup playing out? Let's take a look with our weekly predictions...

With any Eagles-Giants matchup, we start by noting that the Eagles have owned this team's soul over the last decade, as the Birds have now won eight straight, 12 of 13, and 21 of 25. However, the Giants are improving, and have played in five straight games decided by three or fewer points. A recap of those games:

In other words, they've been competitive, but they just can't figure out ways to win unless they're playing Washington.

While playing better football of late, the Giants are still a bad team with serious issues in the secondary and along the offensive line, and they still have to figure out how to win games against legitimate opponents.

The Eagles aren't a good team either, but they could be sparked by the return of some pretty important players like Miles Sanders, Lane Johnson, and Isaac Seumalo, plus the added bonus of healing up a bit during the bye week.

There's good reason to believe the Giants can win this game, but ultimately, I just can't pick that way until I see the Eagles lose to this team.

It’s rare that two NFL teams play twice three weeks, but the Giants will have another crack at the Eagles and will no doubt have revenge on their minds, as the Eagles fought back to win a game that really should have been put away. Returns of injured players will be key here, as the Eagles offense could look completely different than it did back in Week 7. And in my opinion, that is the Eagles’ edge. Alshon Jeffery is an upgrade, even if he is a shadow of his former self. Miles Sanders is the team’s biggest weapon with the ball and he should be back. Dallas Goedert wasn’t in there for the first game, and the offensive line could actually have three starters active if all goes well. The Eagles should post some points this week. Daniel Jones will turn it over. The Eagles will get to .500.

I very nearly picked the Giants to win this game, and it's not a stretch to imagine that being the case on Sunday afternoon. After all, the heavily-favored Eagles were an Evan Engram completion away from losing to this awful Giants team the first time around. And that was at home.

They nearly gave up a 90-yard touchdown run to Daniel Jones. They struggled to finish on offense. And, in all honestly, they didn't look that different from the Eagles team we've seen for much of this season. They're just not good. If that last meeting with the Giants was the exception rather than the rule, the Eagles would win this game in a blowout. But they are who are, and a bye week isn't going to transform this team into an instant contender. Even if they rout the Giants on Sunday, it will likely be viewed more through the lens of the Giants being bad than the Eagles being good — and if they lose, well, people (and not just those in Philly) are going to seriously begin questioning whether this Eagles team can win an NFC East that's essentially begging them to take the division crown.

The good news here is that I still think the Eagles are the better team, and as such, they're going to find a way to win on Sunday. Will it be comfortable? Absolutely not. And, don't be surprised if it takes another late scoring drive from Carson Wentz to put them over the top.

The Giants still stink worse than the Eagles, and now the Eagles have a bye week’s worth of rest and prep to go to battle with. I refuse to overthink this, and will still regret it when this is inevitably tied late in the third quarter.

The Eagles were one Evan Engram drop from losing the first time. I think local guy Joe Judge has done a great job with the Giants this year. They're playing hard for him and they're playing sound defense. There is really not much difference between these teams. So, maybe this is it. The Giants have lost to the Eagles eight-straight times, dating back to Nov. 6, 2016. There's only so many times one team can rule over another in the NFL, before the law of averages catches up. This Sunday it may catch up. Carson Wentz has been too erratic. No one knows which version will show up from week-to-week, Good Carson or Bad Carson. Lately, he's been pretty bad.

This is a close game, and nothing will change my mind about that. Yes, the team gets healthier, but mistakes will still kill this team. We’ve seen the Eagles start slow countless amounts of times and I can’t see that changing. The Giants should have beaten the Eagles the first time out and will believe they can do it this time. Wentz? I don’t think he'll respond to this Favre stuff as we expect. Eagles win, 27-25, but the Giants cover.

Two of the more turnover-prone quarterbacks in the NFL meet for the second time in three weeks at MetLife Stadium Sunday when Carson Wentz and the suddenly healthier Eagles look to further cement their already significant chances to win the dismal NFC East against — can we at least call it a somewhat surging Daniel Jones and the New York Giants team when you grade on the curve of the world's worst division?

The Giants (2-7) are learning as they go with a first-year head coach and a second-year quarterback and have generally been competitive. Take Oct. 22 at Lincoln Financial Field when the Giants were leading 21-10 midway through the fourth quarter before the other shoe dropped in the form of a big Evan Engram drop. The rest is history, culminating in perhaps the play of the first half of the season for Philadelphia (3-4-2), a brilliant 18-yard touchdown throw from Wentz to Giant-killer Boston Scott and a 22-21 win for the Birds.

Since then, the Giants lost to Tom Brady and Tampa Bay by the slimmest of margins, 25-23, and beat Washington, 23-20. In all, Philly native Joe Judge's team has lost their last five games by a total of 10 points. Of course the Giants only two wins were against the WFT by a total of four points.

“Quite frankly, they had us beat,” the coach admitted Wednesday. "... This a good football team, and we’ve got to learn from that game."

The two certainties of life seem to morph into three when you involve the Eagles and Giants. You can add Philadelphia winning in a close game to your death and taxes.

The Eagles have now won eight straight in the series and 12 of 13 overall, a nod to the mastery over Eli Manning late in his career before the baton was handed to Jones and his growing pains.

Philadelphia wins a close one, so why not add symmetry in this disaster of a division and a second 22-21 win for Pederson and Co.? That seems about right for 2020 in the NFC East.