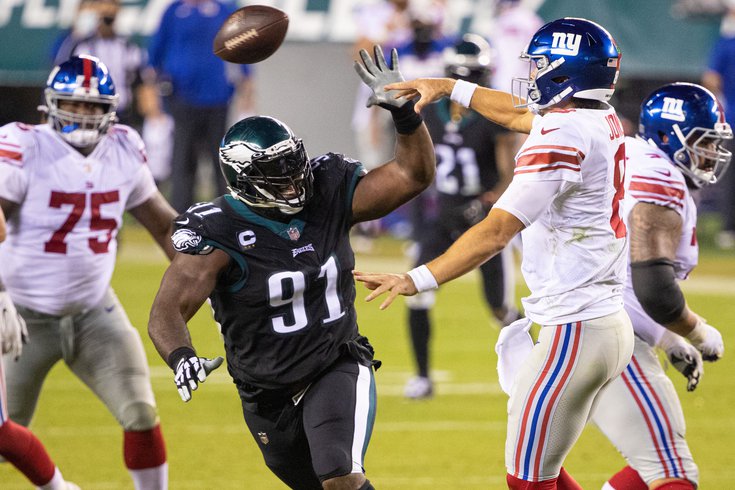 For the gambling enthusiasts, here are my Week 10 NFL picks. To note, the team logos indicate who I think will win the game, not cover the spread. At the end of the picks, I'll note a few teams that I like based on the spread. All the below spreads are courtesy of the consensus Week 10 odds at TheLines.com.

Colts at Titans (Pick em): The Colts have played an easy schedule so far this season. Their first eight games:

Combined record: 25-40-1, and two of the teams with winning records (the Bears and Browns) aren't good. They should be better than 5-3. The Titans are the better team, in my view, plus they're at home, and of course, who doesn't love a good "pick em" game?

Eagles (-3.5) at Giants: With any Eagles-Giants matchup, we start by noting that the Eagles have owned this team's soul over the last decade, as the Birds have now won eight straight, 12 of 13, and 21 of 25. However, the Giants are improving, and have played in five straight games decided by three or fewer points. A recap of those games:

In other words, they've been competitive, but they just can't figure out ways to win unless they're playing Washington.

While playing better football of late, the Giants are still a bad team with serious issues in the secondary and along the offensive line, and they still have to figure out how to win games against legitimate opponents.

The Eagles aren't a good team either, but they could be sparked by the return of some pretty important players like Miles Sanders, Lane Johnson, and Isaac Seumalo, plus the added bonus of healing up a bit during the bye week.

There's good reason to believe the Giants can win this game, but ultimately, I just can't pick that way until I see the Eagles lose to this team.

Football Team at Lions (-4.5): Alex Smith's return to football is a great story, but if we're being honest, he didn't look like a viable NFL quarterback against the Giants last Sunday. Throughout his career, Smith was dangerous because he could use his legs to make plays, whether that be by extending plays and making throws on the run outside the pocket, or gaining yards on the ground as a runner. That's no longer a part of his game, as he is purely a pocket passer, a style that (a) his skill set is not built for, and (b) isn't easy to transition to when you've played a different way your entire career.

Texans at Browns (-3.5): If the Jaguars didn't exist, the Texans wouldn't have a win yet this season.

Jaguars at Packers (-13): Pretty easy survivor pick here if you haven't used the Packers yet.

Buccaneers (-5.5) at Panthers: The Bucs got straight-up embarrassed on Sunday Night Football last week. It'll be interesting to see how they respond. I don't know enough about the makeup of this team to venture a guess worth betting on.

Broncos at Raiders (-5): The Broncos have a -57 point differential in the first half of games this season. As games have progressed, Drew Lock has gotten better, but trying to dig out of a hole week in and week out is not a fun way to go through a season, as you saw with the 2018 Eagles.

Chargers at Dolphins (-2.5): The Dolphins are good! And not only that, they're rolling right now, with four straight wins in which they've outscored their opponents by 64 points. The defense is making plays, and Tua is fun to watch.

If you're going to lay 2.5 points with the Dolphins, it is a little bit concerning that the Chargers are way better than their 2-6 record would indicate, and they haven't lost a single game by more than seven points all season. But screw it, I'm just going to ride the Dolphins until this run they're on cools off.

Bills at Cardinals (-2): This is a fun matchup between the 2019 up and coming team in the AFC vs. the 2020 up and coming team in the NFC. Kyler Murray is already really good, and he has a proven set of skill position players to work with. That's all obvious to the casual fan, but when you start to dig a little deeper into their roster, their defensive front seven leaves a lot to be desired, and as a result their defense as a whole has been inconsistent.

I think the Bills' secondary's chances of at least slowing down the Cards' receivers, and giving Josh Allen a good chance of outscoring Murray.

Seahawks at Rams (-2): The Seahawks listed 40 percent of their roster on their injury report, which I'll assume is why they are underdogs in this matchup. A lot of that is likely nonsense, but a real concern is that both starting corners -- Shaquill Griffin and Quinton Dunbar -- did not practice on Wednesday, and could both be out, though it's worth noting that the Seahawks have coped with injuries in their secondary all season long. I like the Seahawks to win, but without much conviction.

49ers at Saints (-9): It's not easy being the reigning conference champs. You get a hard schedule, and a big target on your back. The Niners' 2020 season has been a huge disappointment, as they have suffered a crazy number of injuries, and have not been able to overcome them. Their last two games were losses to the Seahawks and Packers, and now they have to get through the Saints, Rams, and Bills. They might be done by the quarter pole of the season.

Bengals at Steelers (-7): Ben Roethlisberger may or may not play (he'll probably play) in this game after landing on the reserve/COVID-19 list, and that's why this line is only 7. Even at 7, the Bengals have been competitive enough all season that I just don't trust it.

Ravens (-7) at Patri*ts: If you're against teams that have zero regard for the integrity of the game, then one of the rare good things to come out of 2020 is that the cheating Patri*ts stink now, and will probably continue to stink for the foreseeable future. Even better, again, for those of you who don't like cheaters, the Patri*ts don't stink quite enough to land one of the top-tier quarterbacks in the 2021 NFL Draft.

Vikings (-2.5) at Bears: Over the last two games, Dalvin Cook has 52 rushes for 369 yards and 5 TDs, plus an additional 4 catches for 109 yards. On the season, Cook leads the NFL with 858 rushing yards and 12 rushing TDs. While that kind of heavy usage perhaps isn't great for the longevity of a player as injury-prone as Cook, from a betting perspective, you may as well take advantage of Mike Zimmer's job desperation while it's hot.