A 'big week' for injured Eagles, as Miles Sanders, Isaac Seumalo, others hope to return 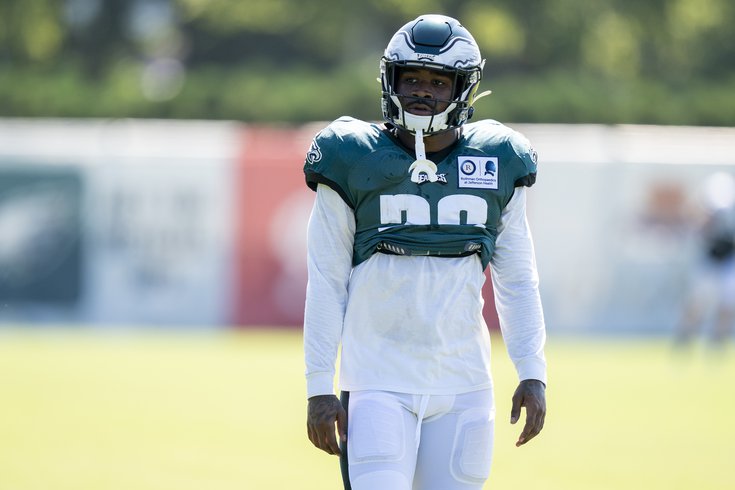 Eagles running back Miles Sanders is week-to-week with a lower body injury.

The Eagles stood pat at the NFL's trade deadline but look poised to get some very important additions in the coming weeks.

That could potentially start in just a few days, with the Eagles returning from their much-needed bye week to face the Giants for the second time in three games in New York Sunday at 1 p.m. The Eagles are favored by 3.5 points in the match up, according to TheLines.com's consensus odds.

But head coach Doug Pederson was non committal on several players' statuses for the week ahead — for good reason. He hasn't seen his team practice in quite some time, and so the possibility of Miles Sanders, Isaac Seumalo and others being back in Week 10 is very much up in the air right now.

"No. 1, we have to be smart with how much of a workload we give them," Pederson said specifically of Seumalo and Sanders. "We do want to see them practice and get some snaps and some reps with the offense but we need to see what kind of a workload, what the stress of the week does... We just have to be able to manage that the right way, that they feel comfortable, they're in the right frame of mind obviously and it's why we do the ramp up the way that we do."

Pederson didn't share much info beyond the above quotation, but that won't stop us from pontificating on what might happen as the Eagles have quite the roster of star players currently working their respective ways back from injury:

All we know for sure is that Sanders — who hurt his knee in Week 6 against the Ravens — is expected to be back at practice this week, according to NFL Network's Ian Rapoport. The running back will have a good chance of returning this week.

Jeffery recovered fully from offseason surgery, but did not hit the field due to a calf injury he apparently sustained in practices while ramping up to make his season debut. Interestingly, Jeffery was never added to the Eagles IR, despite missing the team's first eight games. He too, according to Rapoport, will be practicing this week and has a good chance to hit the field for the first time in Week 10.

Seumalo's practice window opened up and he'll be in uniform this week. There is really no way to tell at this point if he will show enough to earn a start — but the offensive line could absolutely use the boost. He'll most likely be a gametime decision.

Ertz was expected to miss at least six weeks and was added to IR, making his window to return open up next week. There is an outside chance Ertz can play in Week 11.

Pederson was asked, and gave an update on the anchor of the Birds' offensive line. Knowing Johnson and his determination to play, it sounds as though he's planning to start in Week 10.

"Lane's doing good," the coach said. "We'll get him out there today and see where he's at health wise. He's doing really well, he's in a good frame of mind and the time off was really good for him to get treatment and trust and get ready for this week."

A few other players, like Jack Driscoll and Cre'Von LeBlanc aren't expected to return immediately, but could sometime this season.

Overall, this is an important week of practice to pay attention to as the team could be as healthy as it's been all year on Sunday.

"This will be a big week for all of those players. those injured guys as we prepare this week," Pederson said.