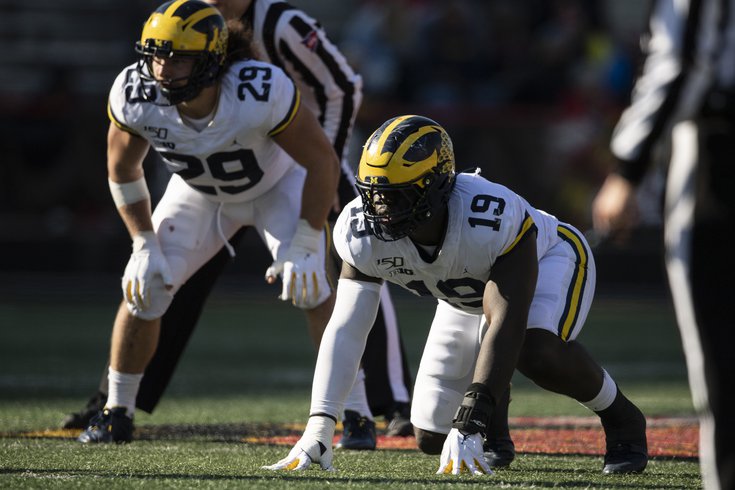 Ibrahim is a compact, physical runner who seems to like contact, and finishes his runs, often with authority. He also has good vision, and knows what holes to hit as blocking develops in front of him. In that respect, he has a chance to be a good short yardage guy. On the downside, he only has 13 career college catches, and spoiler, he is going to run an ugly 40 time. A look:

In his first three games this season, Ibraham already has 571 yards and 10 TDs on 97 carries in just 3 games. He could give the Eagles a power element in their inside running game that they currently lack. Later round guy.

(Technically, this game happened Friday night, but whatever.)

Still, as you'll see below, he can threaten defenses down the field, he creates separation underneath, and he has some toughness, as he tries to maximize his yards per catch on every reception.

Greg Ward is a fine back of the roster player, but the Eagles could really use a player with more playmaking ability from the slot. Day 3 guy.

MORE: Eagles-Giants final injury report, with analysis | Brian Westbrook has three reasons why the Eagles have fallen short this season

Vera-Tucker was a quality LG for USC before moving out to LT this season to replace 2020 first round pick Austin Jackson. The Eagles heavily value versatile offensive linemen, and with good reason, given the fact that they have had seven different offensive line combinations in eight games so far this season.

Vera-Tucker's future in the NFL is likely at guard. He is thought of as a technician with just OK athleticism and strength, who consistently wins his matchups.

He would make sense for the Eagles at LG, with Isaac Seumalo potentially moving to center whenever Jason Kelce retires, which could be on the horizon. He's probably a Day 2 guy.

Surtain is thought of by some as the best cornerback prospect in the country, as he possesses a prototype blend of size and athleticism, to go along with legit corner polish, being the son of former 11-year pro Patrick Surtain, Sr.

The Eagles still need help at outside corner, as they have one very good, but aging corner in Darius Slay, and then a bunch of slot guys. This draft is particularly strong at corner, so it wouldn't be out of the question for one to fall further than expected.

(Disclaimer: This game was postponed.)

MORE: Week 10 NFL picks: Rounding up the experts' predictions for Eagles vs. Giants | Mailbag: The future of the Eagles' offensive line

Paye came in at No. 1 on Bruce Feldman's freaks list:

Paye, a former high school running back who reported to Ann Arbor at 228 pounds, was a member of a state championship 4×100 meter relay team in high school and also won a state title in the long jump, going 21 feet, 5 inches as a junior. He has a rare blend of strength, control and balance and his change of direction is probably even better than former Wolverine Freak Rashan Gary.

While Paye has elite athletic measurables, his production in the stat sheet his first three seasons at Michigan wasn't great, as he had 9.5 sacks in 24 games. The Eagles believe that sacks in college translate to sacks in the pros, though it's worth noting that Rashan Gary, mentioned by Feldman, was an athletic freak with pedestrian production, and my understanding is that the Eagles had him as a potential trade-up target.

Paye is off to an OK start this season, with 2 sacks and 4 tackles for loss in 3 games. NFL teams would feel more comfortable using a first round pick on him if they saw more production. A look:

He could be a player of interest to the Eagles in Round 1 if he has a strong season the rest of the way.