Live MLB rumors: With Cubs looking to sell their veterans, should the Phillies be interested? 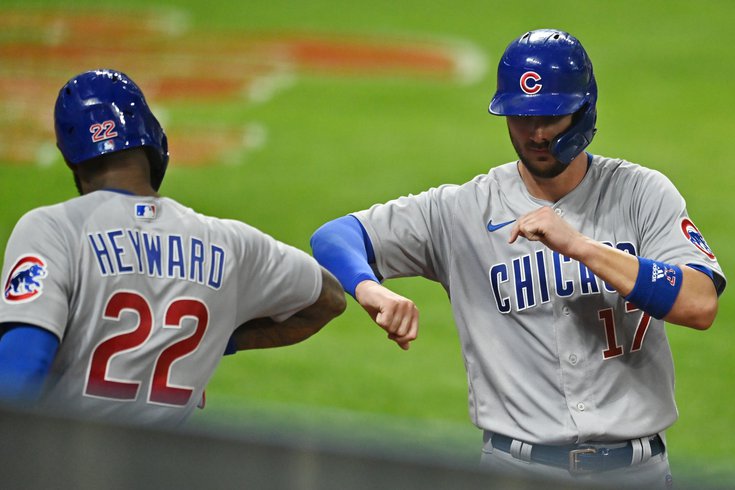 It seems as though, as this painfully slow MLB offseason trudges on, the trade market may be a more lucrative path than free agency for teams in search of splashy moves or meaningful roster additions.

The Phillies, who of course should be singularly focused on retaining catcher J.T. Realmuto, have a variety of needs beyond a backstop. Some interesting possibilities have presented themselves, should a report from ESPN's Buster Olney about the Cubs and their willingness to trade "almost any veteran" in a trade prove to be true.

Baez fills a need for the Phillies, who are short an infielder with Didi Gregorius now a free agent. There's a chance Philly could get some value in targeting the two-time All-Star (and 2019 MVP runner up). He's coming off an absolutely dreadful season, where he hit just .203 with seven homers. In the four seasons prior, Baez combined to average 20 homers and hit .281. His defense remains spot on, however, as he won the NL shortstop Gold Glove for the shortened 2020 season.

Baez has a year of team control left before he's due for an extension, and talks between he and the Cubs have reportedly gone nowhere. The Cubs may be motivated to get something for him. And perhaps a change of scenery would be good? The Phillies would be wise to have an extension in place themselves before they agree to any blockbuster trade — they don't want a repeat of the (potential) Realmuto fiasco.

Trade rumors involving the Phillies and Bryant have swirled through the last two seasons, and one has to imagine there have been prior talks between the two organizations. A Bryant trade would likely mean the end of Rhys Hoskins' stint as starting first baseman, as Bryant plays both third and first, just like Rookie of the Year runner up Alec Bohm, who is not going anywhere. Hoskins could be sent as part of the compensation for Bryant or in a separate trade should this rumor gain steam.

Bryant is an MVP winner and three-time All-Star who averages 31 homers per 162 games. The Phillies need to get power in the lineup so they can take advantage of the short porches in Citizens Bank Park again. Bryant, like Baez, had a down 2020 hitting just .206 — but he can hit for average and has shown he has elite power numbers. The Phillies should be willing to toss in nearly any prospect for Bryant, who is in the exact same contract situation as Baez, with one year of team control left.

Schwarber is another tenured member of the Cubs' core with one year left before free agency. He is a probably available at a much more reasonable price, as he is not an MVP candidate but a home run or bust power bat in the mold of Jay Bruce. In six seasons with Chicago, Schwarber hit .230 while averaging 31 homers per 162 games. He'd be a good fit as a DH and occasional corner outfielder. He also has played catcher in the big leagues before but not more than a handful of times per season.

A two-time All Star catcher who can do it all is sort of like Realmuto lite. The reason he'd be appealing to the Phillies is his contract situation. Since he was a relatively late bloomer, he has two more years of team control left before he hits free agency, so the price will be right (though eventually, the Phillies will have to start being able to ink young players to extensions).

Rizzo is a four-time Gold Glover who has gotten MVP votes five times. But a "middle aged" first baseman isn't really a need for the Phillies, and his pending free agency would make the Phillies unlikely to offer much for him with a need to get younger and cheaper as well as more talented.

Now we're talking. Kimbrel has been one of the most dynamic and reliable closers in recent seasons, making seven All-Star teams with a 2.17 career ERA and 348 saves to his name. He's won a World Series with the Red Sox and has appeared in 20 playoff games. He has one year left on his current deal with a 2022 option for $16 million. We don't really need to stretch to say the Phillies need bullpen help, and bad. Kimbrel is as good as it gets.

The above four veterans are all locked into long term deals at least through 2023 and would be much harder to move. Darvish is a top starter making $21 million a year. Heyward is a defense-first outfielder who can also swing the bat a bit, but is in the middle of a monster eight-year, $184 deal. Hendricks is Chicago's ace and probably not going anywhere with a vesting option for 2024 after his current deal pans out. And Bote is a 27-year-old utility man in the mold of Scott Kingery who is light with the bat and isn't a big draw for the Phillies.

There are three months left before teams have to get their 2021 rosters in order, so there is plenty of time for this to play out. But with so many impressive talents available who could make the Phillies — who currently boast a modest +3000 chance to win the 2021 World Series (according to TheLines.com) — immediately better, it would be silly for them to not shoot the Cubs a few investigatory text messages or pick up the phone.

Follow along below as the rumor mill and offseason continue in MLB: