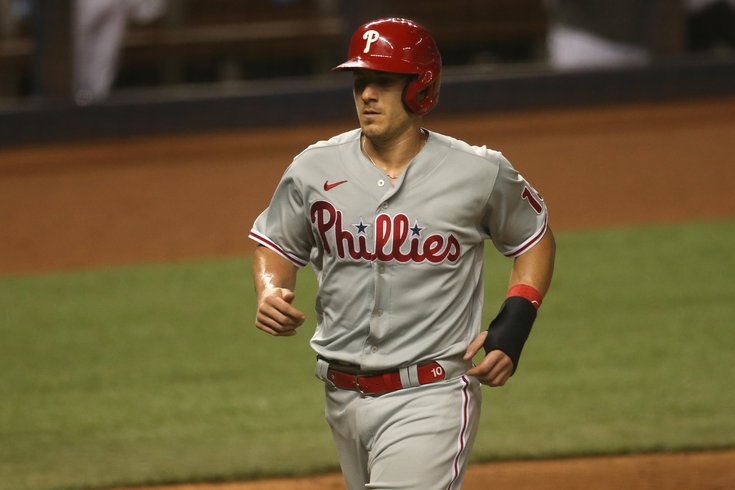 If you've clicked on this link, you are already bracing yourself for some pretty gut-wrenching analysis regarding the eventual destination of star (former) Phillies catcher J.T. Realmuto.

The Phillies have continually told the media the the team is committed to signing arguably the best backstop in the league to a contract to stay in red pinstripes, and they better. After all, they paid an arm and a leg (in the form of pitcher Sixto Sanchez) for him in a trade two years ago and it would be a disaster in this city if he doesn't wind up here longterm.

If the Phillies are serious about contending in 2021 and improving their World Series odds — which currently stand at +3000 according to DraftKings, via TheLines.com, retaining Realmuto is probably a key offseason move for the team which isn't exactly strapped for cash, but does not look to be comfortable exceeding the luxury tax, giving themselves a salary cap of sorts this fall.

Realmuto himself made it pretty clear that if the money is close to the same among his potential suitors that he'd prefer to stay in Philly. The problem is, the other 29 teams in the league know that. And the Phillies' rivals to the north — the hated Mets — have a new owner who is looking to make a splash. This could be terrible news for the Phillies.

Over at MLB.com, three experts — Anthony DiComo (Mets beat writer), Mark Feinsand (MLB insider) and Todd Zolecki (Phillies beat writer) — discussed the potential destination of Realmuto, and they all agreed on his eventual new home. Here's a snippet from that conversation:

Last question -- here comes the part where I put you on the spot. Where will Realmuto sign? Go!

Feinsand: Mets. Five years, $125 million. That’s $25 million per year, which would be a new record for a catcher.

DiComo: Mets. Look, we have no track record with Steve Cohen, so it's not easy to say with 100 percent clarity how he will operate. But I genuinely believe the Mets will prioritize the position and prioritize the player, and get their guy in Cohen's first big splash.

Feinsand: Be careful what you say, Todd. Philly is watching.

Zolecki: I'm going to pick the Mets. I think the Phillies still have a shot, but there's so much uncertainty right now with their leadership. It doesn't look like they're in any hurry to hire a new GM or president of baseball operations. Who's doing the negotiating? But if Realmuto can't find his market, I can see the Phillies bringing him back. [MLB.com]

It seems likely that Realmuto's decision is far from imminent, but you never know. If you're nervous and want to keep up with the latest goings on on the MLB's hot stove, follow along with our live stream and open thread below all day long: