The Phillies don't know how to draft, and it's why they can't win 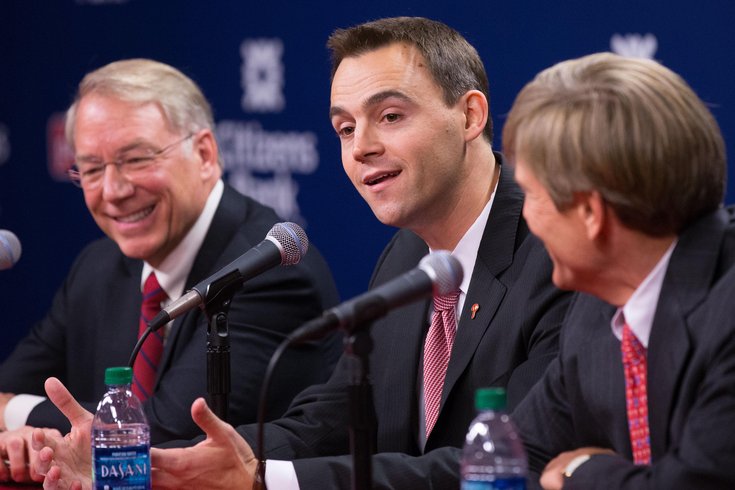 The Phillies have not made the playoffs since 2011. It's not entirely happenstance that they also, in that span, have made absolutely terrible draft picks. Hundreds of them in fact.

It's worth mentioning, without a doubt, that Major League Baseball drafts are a lot different than the other pro sports leagues. In the NBA, you expect at least one of your two picks to contribute immediately. Likewise in the NFL, a good draft nets a smart team four or more players who make the 53-man roster and contribute as rookies. Even in the NHL, hockey players picked in the top two or three rounds almost always make some kind of impact at the highest level at some point.

That is not so for the MLB. According to math done by Baseball America, 17.6% of players drafted in one of the 40 rounds make it to the majors — which used to be 50 until a few seasons ago. Players are often drafted out of high school and can take four years or more to get up to speed as a pro athlete. In the modern draft, which we assume will return to 40 rounds in 2021 (it was just five in 2020), only about seven players per draft class per team make any kind of contribution.

Well, that's with the other 29 teams. For the Phillies, it's been even worse than that.

Not including players drafted in the last three seasons' drafts, the Phillies have seen just 48 of the 636 players they drafted between the years of 2004 and 2017 make it to the majors (and appear in at least one game with Philadelphia). That's 7.5%, less than half the average rate across MLB from 1980-to-present.

Those 48 Phillies' big leaguers have combined to create a WAR (wins above replacement) of 52.5 over the span of 14 years, or 3.75 wins above replacement per season. Which breaks down to 0.09 WAR per player drafted, since 2004. And if you take away the 21.7 WAR created by 2014 first rounder Aaron Nola, it's an embarrassingly low hit rate.

Teams routinely bolster their prospect reserves as well by making international signings, but the Phillies' failings in that area are worthy of its own article entirely (remember Miguel Alfredo Gonzalez?) Even setting aside the moderately successful signings of players like Cesar Hernandez, Antonio Bastardo, Sixto Sanchez and others, there are few success stories.

The Phillies finished the 2020 season with 13 players they drafted, 22 they traded for or signed as a free agent and five signed as an international amateur on their 40-man roster. That's not all that unusual a breakdown — the world champion Dodgers had 21 signed/traded-for players and six international free agents on their title winning 40-man, but they won the World Series and led the league in wins all season long. The Rays (AL pennant winners) have a similar breakdown. Contending teams are supposed to have 21 free agent/trade acquisitions. Not teams that have the second longest playoff draught in the game.

There are lots of other variables that impact how much contribution a team gets from its American draft classes, like trading players away who later make it to the majors. Or players who are drafted but choose not to sign, like Kyle Freeland. But every other team has the same factors to consider and most have fared much better. In the last 162-game regular season in 2019, the Astros were responsible for 31 WAR created as a team. Mike Trout, since 2011, has 74.4 WAR all by himself. Who knows when the Phillies (and their 52.5 WAR so from draftees since 2004) entire staple of draftees will eclipse his production.

How can the Phillies contend when their homegrown talent is responsible for just 3.75 WAR per season, when it clearly takes 10 times that much production to compete for a championship? Well, it means they rely, perhaps more than any other team, on free agents to make up for their drafting mistakes.

Which, hey, leads us exactly where the Phillies are right now, in a budget crunch, desperate to keep a catcher in J.T. Realmuto they acquired in exchange for one of their rare homegrown success stories in Sixto Sanchez.

Here's a look at the carnage since 2004 (just after Cole Hamels, Ryan Howard, Chase Utley, Jimmy Rollins, Pat Burrell and other homegrown players made it to the big leagues for the first time):

How many of those 14 players would you want in your lineup? They were the best Philly produced for over a decade. And it's not just that they can't draft contributors. It's that those contributors combined for 52.5 WAR in 4,715 combined MLB Games. In the equivalent of around 29 full seasons, the Phillies received 1.8 WAR on average per season from every single player they drafted. Bryce Harper's WAR last season — in just 58 games — was 1.7.

For a perfect case study in the Phillies futility, let's take a random season — say, 2012. The Phillies technically had nine players make it to the majors from that draft class but five of them made it for other teams. The four who stayed in the system to make their major league debuts with the Phillies? Dylan Cozens, Hoby Milner, Cameron Perkins and Drew Anderson. In addition, their two first-round picks from 2012, Shane Watson and Mitch Gueller did not make the majors, ever.

If this was a once in a while thing that would be okay. Scouting is hard and no one has a crystal ball. Every team in baseball has a bad year or two. But this is not an independent incident. This kind of swing and miss, no pun intended, happens almost every year.

The Phillies were ranked by MLB.com as having the 23rd best farm system in baseball in September, down from 19th preseason. And this is including recent high first-round picks Bryson Stott, Alec Bohm, Mick Abel and second rounder Spencer Howard in the pool of prospects considered.

Speaking of first-round picks, a qualification that results in a rate of 66% of players making it to the majors (since 1980, according to Baseball America), the Phillies have been no better since 2004:

Not including the two most recent Phillies first-round picks, which we'll give more time to develop, seven of 17 first-round draft choices have appeared in a game for the Phillies, or 41.1%, well short of the league average of 66%. Of those 17, 11 did actually make it to the majors, with a few of them getting chances with other teams after being traded (65%). The quality is the issue here, not the quantity though. Nola was an All-Star and Cy Young contender and the jury us still out on Bohm, Haseley, Moniak and Randolph. But a single All-Star level player from 17 first round picks is bad, even for Major League Baseball.

Just for comparison's sake, the Astros, arguably one of the best drafting teams in baseball in the last decade or so, have drafted three players who have made All-Star teams and who've gotten MVP votes since just 2011. Their first rounders have a combined WAR of 105.6. The Phillies' first rounders have a total WAR of 30.4 in the same span (and Nola accounts for 21.7, remember).

There is a scouting problem and it's deeply rooted. And certainly has not been helped by the pandemic, which has cancelled hundreds of minor league and college games and forced the Phillies and other teams to let go of valuable members of their scouting teams.

Phillies President of Baseball Operations Andy MacPhail minimized the problem in a zoom call with media members Friday, citing the recent success of Bohm as perhaps a sign of good things to come.

"It's a snap shot in time," MacPhail said. "That number is going to change every year. Someone is going to hit it big... it's always going to vacillate."

MacPhail also cited that the Phillies "rank last in draft picks in the first three rounds since 2016."

Bringing in high-priced free agents like Jake Arrieta and Zack Wheeler have cost the Phillies early-round draft picks and they really don't have much to show for it.

And the only reason they had to surrender the aforementioned picks is because they had such little talent in the farm system ready to contribute, they had to bring in high priced mercenaries to make up for it. And the cycle continues as fewer picks in the first three rounds are exactly what the doctor ordered for this franchise (...not).

The Phillies will likely tender Realmuto with a qualifying offer, and could do the same for Didi Gregorius. If those two players decline the offer, it will net the Phillies a compensation round pick or two in the upcoming draft. Retaining Realmuto or Gregorius would obviously be great, but the farm system needs to be put in a situation for success.

Which also means, maybe it's time for the team to clean house, or pick a new strategy for drafting players. Because clearly, something is broken.