The team has plenty of holes to fill aside from catcher. So how will they make it work, especially if Realmuto walks? 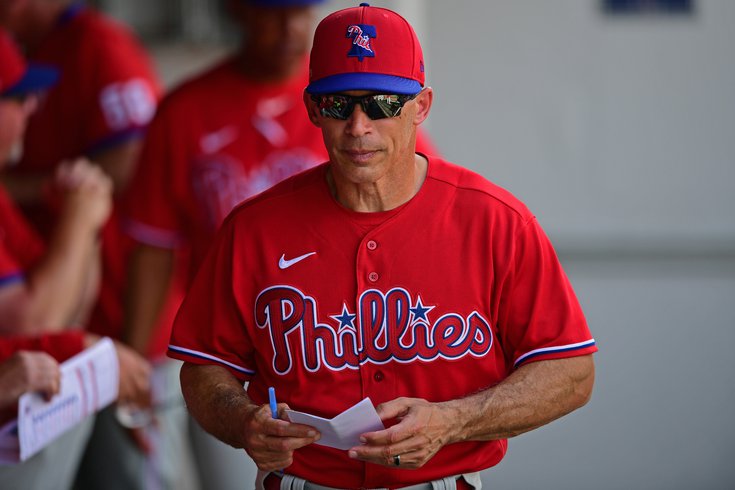 How will the roster look for in Year 2 for Philadelphia Phillies manager Joe Girardi?

One of the main contradictions in baseball is that it moves both slowly and quickly. A season ends and a new one immediately begins within a few days of the conclusion of the World Series.

Now that the long marathon and quick sprint of Baseball 2020 is over, there will not be a breath for the teams that are already retooling their rosters.

The 2021 Phillies are going to be a puzzle with huge gaps to fill. And unlike the past few off-seasons, there probably won’t be an open and bottomless checkbook there to help fill those gaps.

That is evidenced by the fact that Ned Rice — the assistant GM of the club before the removal of Matt Klentak from the main position that put him as the interim guy – and Andy MacPhail (a team president in a lame duck year who seems likely gone in 12 months) are the ones who will apparently oversee at least the beginning of the roster construction.

This isn’t a nip-tuck affair, either. A list of areas that need immediate attention include the following:

It would be a year when “stupid money” could go a long way. However, stupid money isn’t walking in that door – not with a pandemic and no guarantee of when people being allowed back in Citizens Bank Park.

By that definition, it is far-fetched to think that the Phillies, who are $71 million under the luxury tax threshold according to Cot’s Baseball Contracts, would reinvest a huge amount of the money that’s coming from free agents like Jay Bruce, Jake Arrieta, J.T. Realmuto or Didi Gregorius.

Of all of those players, the one that would seem possible for a return could be Realmuto – and even that seems like a long shot at this point depending on the market conditions.

For the case of this scenario, however, let’s assume Realmuto walks. OK, you can boo and curse right now. (Yes, that even includes you, Bryce.)

Let’s assume that $70 million gets cut by 50 percent with the team looking to save in the current economic climate, so you have $35 million in payroll room to try to fill those roster spots. How in the world do you do it?

It isn’t going to be pretty, to say the least. But there are ways to make things work together in the right way that can keep a team in the hunt while not breaking the budget.

Catcher: Let’s start with this disclaimer — nobody is going to be able to replace Realmuto. Watching him walk out the door is a huge loss that will sting every time you see him in another uniform or watch Sixto Sanchez pitch for the Marlins. Still, the Phillies could have a few ways to go here.

They could go for the experience with a long shot like Cardinals catcher Yadier Molina. Molina is a winner and a team leader. However, he’s also 38 years old and was expected to retire at the end of the year. His salary could be roughly $10 million to $15 million.

The rest of the list of free agents isn’t great. However, there’s one guy to keep an eye on: Tampa Bay’s Mike Zunino, who has a $4.5 million team option due at the end of the World Series. Zunino’s offense is admittedly awful – a career .200 hitter with a .278 on base percentage — but he’s viewed as one of the best with the glove and handling a pitching staff in the sport. If the Rays don’t pick up that option, he could be a low-cost option that could pair with Andrew Knapp behind the plate for a combo that could be viewed as primarily defensive. If that’s the case, you have to find offense elsewhere.

The last possibility? The Gary Sanchez situation with the Yankees. If New York moves on from the inconsistent Sanchez — especially if they take a run at Realmuto — he could be available in a trade with a potential second year of arbitration number of $6 million. He’s not perfect, but it's an option that would save roughly $20 million from the projected price tag for Realmuto.

Shortstop: This move, on the surface, seems easy with Jean Segura going back to short with a price tag of $14.5 million if Gregorius moves on. The question is – would you like to trade Segura for a more consistent performer and perhaps fill another hole and save some money? Moving Segura will not be easy with every team having a financial crunch. Andrelton Simmons is the best shortstop on the free agent market, but he doesn’t exactly seem to fit in the Phillies budget. One guy that a scout recently felt could be on the Phillies radar if they move on from both Segura and Gregorius? Freddy Galvis.

Left/Center Field/Bench: This is where things get tangled. The Phillies have one more year of Andrew McCutchen, but he appeared to be a platoon player. Now, the Phillies could look to put either Adam Haseley or Roman Quinn in left as a replacement if McCutchen needs days off if they can find an everyday centerfielder. The best outfielder on the market that is a centerfielder is George Springer, and his contract demands could be more reasonable than you think after a subpar 2020 on the heels of the Astros trash can scandal. Springer would be a replacement for Realmuto’s bat in the Phillies lineup.

Two others to keep an eye on: 31-year-old Jackie Bradley Jr. from the Red Sox and 37-year-old Brett Gardner, who was a Joe Girardi favorite with the Yankees and who could be available if New York doesn’t exercise a $10 million club option. Guys like Gardner could get squeezed extra hard in this economic market.

Starting Pitching: The top three would appear to be set with Aaron Nola, Zach Wheeler and Zach Eflin. Spencer Howard should fit into the rotation, but his innings limits necessitates at least two other starters. The Phillies would be wise to add one lefthander in here, so maybe someone like Rich Hill (who earned $3 million this year with the Twins) could fit in after a strong finish to 2020. Robbie Ray could be in that class, too – but anything close his $9.4 million full-year contract for this year would likely be too rich. There are a lot of guys who would fit as a bottom-of-rotation guy among righties that would likely be good rebound options for the Phils.

Relievers: Where do you start here? Well, let’s figure that Hector Neris is back, but not as the closer. That means the Phillies have to find a back-end guy. The pickings are not ideal, but one name stands out — local guy Sean Doolittle, who is 34 and likely a good bounce-back target who may not cost a ton. (He made $4.5 million with the Nationals last year.) Doolittle had velocity issues, but told Nationals writers that he was going to spend time at Seattle based Driveline Baseball performance training facility to work on that. The Phillies do have a history of looking at guys with ties to Driveline – so that’s one thing to keep in mind.

If you want another guy who had some injury issues in 2020 but could end up being a late-inning type, there’s Pirates closer Keona Kela. His 2020 ended with right forearm inflammation, but he also had 24 saves in 2018. This is the type of guy the Phillies would have to get lucky with on a low salary, mixed in with minor league development for the other spots.

The dust has barely settled on in the infield at Dodgers Stadium, but there are already odds for the 2021 World Series — the Phillies are in the middle of the pack at +3000, according to TheLines.com. It appears things are moving quickly again, and if the Phillies want to finally get back to the postseason and have a shot at contending for the World Series, they'd be wise to act accordingly.