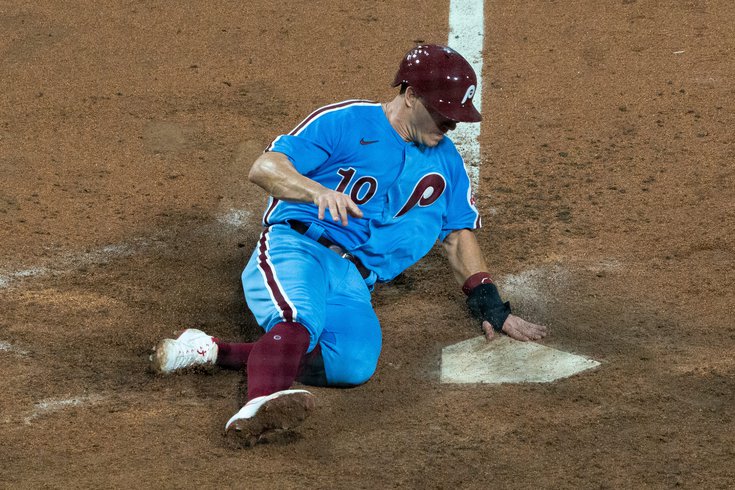 The biggest priority for the Phillies this offseason — at least on the field, as it can be argued hiring a GM is most important — is locking in catcher J.T. Realmuto, who is now officially a free agent following the conclusion of the 2020 World Series in Los Angeles on Tuesday night.

And the reasons why the team should be all-in on re-signing the two-time All-Star catcher are obvious.

First, there's his talent, which has him consistently regarded as one of the best catchers — if not the best catcher — in all of baseball. Last season, Realmuto slashed .266/.349/.491 with 11 home runs, 32 RBI and 33 runs during the shortened season. In his two seasons in Philly, he's also become fast friends with the team's franchise centerpiece in Bryce Harper. And in addition to everything he brings on the field, he's also by all accounts been one of the leaders of the team and a great representative of the organization.

Those are reasons why any team would want Realmuto in its clubhouse. But the Phillies should have an extra incentive after giving away top pitching prospect Sixto Sanchez in the deal to acquire Realmuto from the Marlins. And this season, they got to watch Sanchez not only break out for the Marlins in his first season in the big leagues, but also pitch in a postseason game after Miami was able to grab one of the NL wild card spots the Phillies failed to earn.

John Middleton, whose team opened with the 13th-best odds to win the 2021 World Series, according to TheLines.com, didn't sound too sure he would be willing to break the bank to re-sign Realmuto when he spoke to reporters at the conclusion of their ill-fated 2020 campaign. But he also seemed to understand the reality of the situation involving Sanchez and how giving up your top prospect — especially one who you'll have to face in the division for years to come — for two seasons of a rental that didn't even help you get over the playoff hump. It's not a good look, and one he'll hope to avoid by inking Realmuto to a long-term deal this offseason.

And there's at least some good news for Middleton, as it appears Realmuto is willing to take a discount to return to Philly — at least to a certain point. According to Jim Salisbury of NBC Sports Philadelphia, the 30-year-old catcher prefers playing for Philadelphia over either of the New York teams, and it would take a record-setting contract offer to lure him up north.

In addition to the Phillies, Realmuto is expected to draw interest from both New York clubs. The Yankees have prioritized re-signing infielder DJ LeMahieu so that could impact their potential pursuit Realmuto. The Mets, with Steve Cohen about to be approved as their new owner, also have a big need at catcher. Once approved, Cohen will become baseball's richest owner and it's not difficult to envision him making a big play for Realmuto.

According to a person close to Realmuto, the catcher, an Oklahoma native, would like to remain in Philadelphia and is not particularly keen on playing in New York. However, if that's where the record-setting money is, Realmuto will eat heroes instead of hoagies.

All teams have five days following the World Series to decide whether to make a qualifying offer to their own free-agent players. This year's qualifying offer is $18.9 million. The player has 10 days to accept or reject the offer. If a player accepts it, he immediately becomes signed for 2021. Realmuto will definitely get a qualifying offer and in this uncertain market may have to at least think about it. If he rejects it, the Phillies can still attempt to sign him throughout the offseason.  If he signs elsewhere, the Phils would get a draft pick as compensation for losing him.  [nbcsports.com]

So, what would a record-setting offer look like? Currently, the highest contract ever for a catcher was Joe Mauer's eight-year, $184 million deal with the Twins (an average value of $23 million).

While that might be a little tough for the Phillies to fit if they hope to fill their numerous other holes and remain under the luxury tax in 2021 — Kevin Cooney outlined some of their options earlier on Wednesday — it probably won't be a problem for the Yankees, who seemingly always have bottomless pockets, and Mets, who have a new owner looking to make a big opening statement.

It's certainly nice to know that Realmuto's enjoyed his time in Philly enough that it's his preferred destination — but it's still worth worrying whether or not the Phillies will be willing to spend enough stupid smart money to make sure it becomes his home for the foreseeable future.