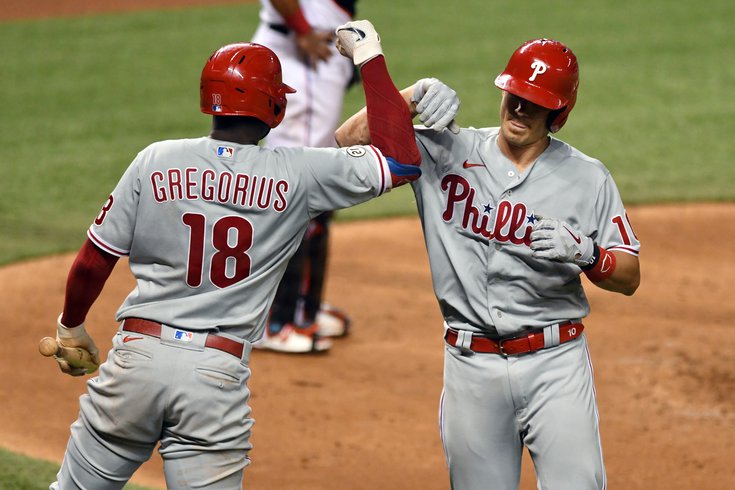 The Phillies are bringing back Didi Gregorius, left, and J.T. Realmuto, right.

This isn't a typical offseason for the Phillies. Though it's probably a fact that it's atypical for everyone else too.

With the World Series underway, MLB free agency is set to begin in a matter of weeks (it usually happens five days after the final game). The Phillies still have no GM, and no clear power structure for decision making in their front office — though it wouldn't be surprising if Andy MacPhail is the man this fall.

There has been no news yet of interviews with replacements for Matt Klentak — who still remains in the organization after a "demotion" from his former GM role, and this is not the time for a lack of clear direction and strategy for a team that has had back-to-back September collapses.

There are three big priorities this offseason, the first of which — adding through free agency — will be explored in great detail as the offseason approaches. The other two are retaining their two best hitters (by WAR) not named Bryce Harper: Didi Gregorius and J.T. Realmuto, each set to become unrestricted free agents.

The Phillies are slated to shed quite a bit of salary heading into 2021, with Jake Arrieta, Jay Bruce and others likely off the books. By our math, the team will have just around $84 million to spend if they want to avoid paying the tax — assuming the luxury tax threshold stays right around $205 million. That sounds like a lot of cash, but when you consider that it needs to pay for a top 3 starting pitcher, shortstop, catcher, outfielder, and bullpen pieces, it doesn't seem like nearly enough.

According to a Todd Zolecki mailbag from earlier this week, the Phillies may have to pick which of their soon-to-be prized free agents to pursue:

It is difficult to envision the Phillies signing both Realmuto and Gregorius to multiyear contracts, unless they get creative.

Philadelphia probably cannot have it all, which is why it is so important to make better decisions than it has the past few years. The club cannot continue to miss the postseason during the prime years of Harper, Aaron Nola, Zack Wheeler, etc.  [MLB.com]

Realmuto has to be the priority. He is arguably the best catcher in baseball, and the team has already invested one of the best young pitchers in baseball (Sixto Sanchez) in his acquisition. Letting him walk after two seasons would be another disaster for a team all too familiar with disaster over the last decade.

It's hard to foresee there not being at least one team willing to back a Brinks truck up to Realmuto's house. The Phillies should come to grips that they simply must be that team. The words from the team's majority owner John Middleton, however were not encouraging to that end.

"Is it a priority? Absolutely," Middleton told reporters after the season ended. "My position was, I'd be willing to trade Sixto as long as you extend J.T., and if you don't exited J.T. I would not have traded Sixto.

That sounds like an owner expressing regret more than confidence that they can get a deal done. It's anyone's guess whether the Realmuto saga will resolve itself quickly, or drag out for months like Harper's did.

The Inquirer's Scott Lauber thinks there will be a ton of teams interested in Relmuto, ranging from the Mets to the Nationals to the Yankees to the Padres to the Blue Jays. Even having two of the above teams interested could seriously and drastically hurt the Phillies in negotiations. Here's more from Lauber:

Luxury-tax concerns caused the Phillies to delay extension talks with Berry until determining Realmuto’s 2020 salary through arbitration in February. The onset of the pandemic in March halted negotiations with the sides far apart. But it was early in the process, leaving one source to speculate that a deal would’ve been reached if not for COVID-19.

In a pandemic world, the Phillies are betting on Realmuto’s settling for less than he seeks. All along, they seemed to realize it would take at least $23 million per year. Maybe they will still go that far, and maybe it will be enough.

Options at shortstop are vast, if they look outside at a cheaper free agent, but their internal options will not excite Phillies fans (especially after a pretty awful 2020 season from Scott Kingery). The Phillies can't sleep on their "backup" plan in retaining Gregorius, who quietly led all Phillies hitters in total hits and RBI and had the second most extra base hits.

The Yankees and Angels reportedly already have an interest in Gregorius, according to the New York Post's George A. King III:

The first name that surfaces is former Yankee Didi Gregorius. He had a bounce-back season in Philadelphia after the Yankees didn’t show much interest in retaining him following the 2019 season.

Should the Yankees be thinking about Gregorius 2.0, however, they already have competition.

The Angels have an interest in the left-handed hitting Gregorius, who will turn 31 in February. That is likely advance work because their shortstop, Andrelton Simmons, will become a free agent after the World Series. [New York Post]

We can optimistic and say we hope the Phillies will spare their fans frustration and stress this offseason, but would anyone believe that? Prepare for an action pack and rumor filled offseason.