Phillies confident, but realistic about chances of re-signing J.T. Realmuto 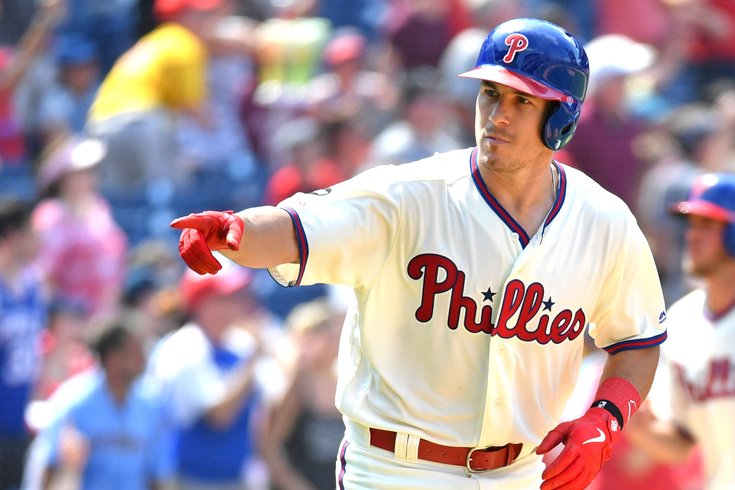 Free agency begins next week for all 30 MLB teams and the biggest, and really only question Phillies fans have right now is if the team will be able to "sign him."

Those are, of course, the words of Phillies superstar Bryce Harper, who has mounted his own campaign to try and convince John Middleton and the team's ownership to pony up enough money to keep J.T. Realmuto behind the plate at Citizens Bank Park.

Even in a down year that saw him battle injuries down the stretch, Realmuto still was second on the team in homers, fourth in RBI and third in slugging. And he was probably the best defensive catcher in the league, yet again.

On Friday afternoon, Phillies President of Baseball Operations Andy MacPhail spoke to Philly media members about the team's search for a GM and the future of the franchise in the face of a global pandemic. He also spoke briefly about the push to keep Realmuto in red pinstripes.

Why, exactly, the two parties have not yet been able to reach some kind of a deal was not explained, but MacPhail did express a little cautious optimism.

"There are two things we have going for us," he said, "I think he enjoys this time here and obviously we want him back and I think hose two things give you reasons for hope, in any offseason there are a multitude of variables."

A report from a few days ago confirms this, with Realmuto saying he does prefer Philly to places like New York, assuming there is not a boatload of extra cash from the Big Apple involved. MacPhail did show a little frustration when asked about the initial trade that sent Sixto Sanchez to Miami and Realmuto to Philly. Apparently, the Phillies were unable to negotiate an extension before the trade was finalized two offseasons ago. He surmises that "teams just don't do that anymore."

So what will the ramifications be, should the legacy of this front office regime be trading Sanchez, a stud 100-mph throwing starter, for two non competitive years with a catcher?

"A lot of that is going to be contingent on how well Sixto does," MacPhail said. "He had great debut but there are no guarantees when it comes to young pitching... He was generally regarded as our best prospect when we made the trade and we are aware of that. It's not the best outcome we preferred."

MacPhail refused to put a percentage on his confidence in retaining Realmuto, but did suggest that the current front office structure — which is exactly the same as the one from the last few seasons — will be making the decisions this offseason. With Matt Klentak "demoted," the rest of the staff remains the same. Ned Rice, who MacPhail describes as being very similar to Klentak, will be atop the decision-making tree.

The search for a GM will continue through 2021, MacPhail suggested, for many reasons but the most prominent of these is the pandemic, which is also wrecking havoc on the team's bottom line.

"It's not pretty. It's not pretty," he said. "Something like this caught us in a bad spot, we had just expanded the operation and expanded the payroll. We were active in signing free agents like Wheeler and Harper, we did not expect a global pandemic."

His choice of words really seems to illustrate a baseball team which is not eager to expand payroll. Which is what it would take to build a contender next season out of a team with so many big roster holes.

"This is about as miserable time in baseball as I have ever seen," he said.

So perhaps fans should lower their expectations. Realmuto's potential departure could be the least of this team's worries.