WATCH: Gritty goes to space as Flyers mascot continue to pump out A+ quarantine content 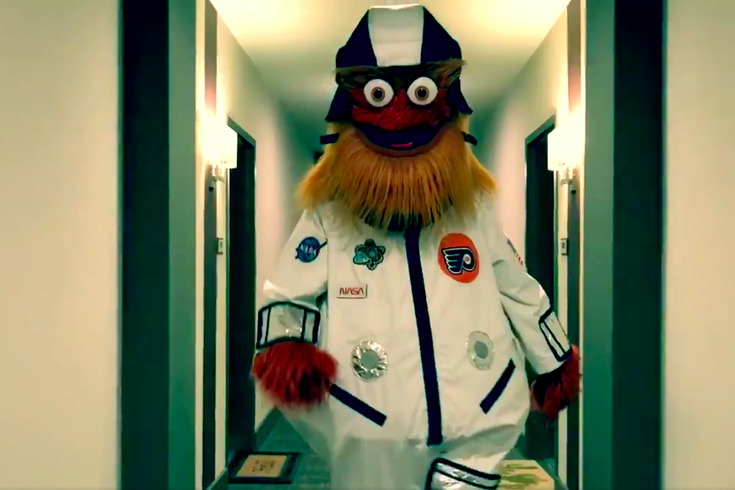 The two NASA astronauts aboard SpaceX's Falcon 9 rocket weren't the only terrestrial beings headed into space on Saturday. Shortly after their successful launch to join the International Space Station, one of Philly's own joined in the historic moment by taking one giant leap for mascot-kind.

That's right, we're talking about Gritty, who bravely went where no Philly mascot has ever gone before when he launched his own self-made rocket into orbit. The Flyers mascot released a video of his launch on Twitter that captures the orange astronaut's maiden voyage.

I just need some space. pic.twitter.com/XdzaC8aIrx

While the control room hasn't heard from him since shortly after takeoff, they say there's no reason to worry. He can't talk. They have, however, been able to detect some faint squeaking, but are still trying to determine the source.

There's also no word on when Gritty might return to earth, but with the Flyers not expected to resume play until at least July, he has some time. In the meantime, he'll be in his basket floating thousands of miles above, looking down on all of us. Watching. And judging. You'd be wise to remember that.

MORE: Flyers couldn't be in better shape as playoff structure comes into focus | The 10 weirdest and wackiest Flyers stats we could find

In all seriousness, this has been an absolutely awful week and some of us might just need a moment to laugh and smile. Hopefully this was able to provide that, as Gritty's content throughout the pandemic/quarantine has been one of the constant sources of levity during a time in which that's more welcome than ever.

There was this Tiger King parody, which may be redundant.

I AM THE TIGER KING pic.twitter.com/SYT21bFMDv

And this video of him proving just how not bored he was...

...which was followed by another to remind us he was still the quarantine king.

Because he's a man of the people, he drove around on top of a firetruck just to say hello to the people of Delco.

It was nice to see me again.

On Mother's Day, he took a bullet for Bambi's mom. Like a good son.

ANYTHING for the moms pic.twitter.com/JIvCcK6PB6

There was also this salute to frontline healthcare workers fighting against the pandemic (and Bane, apparently).

No one cared who I was until I put on the mask. pic.twitter.com/3Anq7VGCTY

And finally, this NSFW reminder that summer is coming.

Are nude beaches open too? pic.twitter.com/dxyk062ple

So that's what's underneath that spacesuit? Get it, Gritty.

Needless to say, he's a content machine. And in the face of a pandemic that's killed over 100,000 Americans — not to mention racial unrest across the nation and protests, including in Philly, over the murder of George Floyd by a now-former Minneapolis police office — a 30-second clip of Gritty bouncing a ping-pong ball might be just the escape you need before returning the reality of the world.

Also, one last reminder that Gritty is up for Mascot of the Year in the NHL Fan Choice Awards ... but is somehow currently losing to a stupid lizard from Vegas. Let's try to fix that before voting closes.