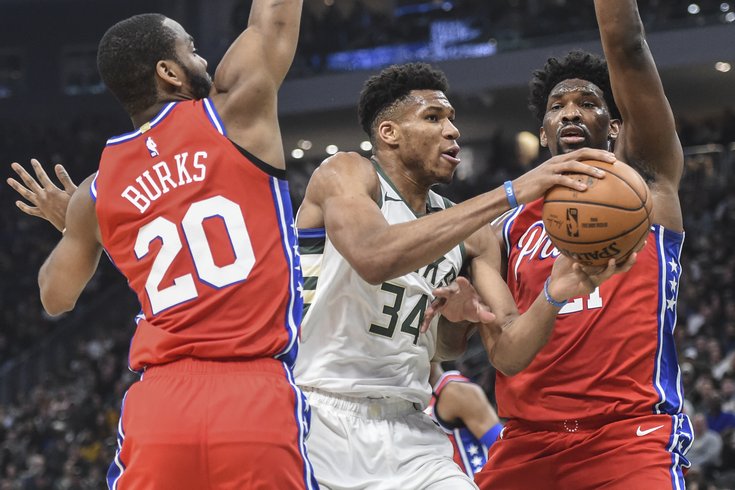 The Sixers got throttled by the Milwaukee Bucks on the road Saturday night, 119-98, which you would have seen coming if you had seen the Sixers play any other road game this season.

• They hung around in the first half. Shake Milton and Furkan Korkmaz shot well. That's about all I got.

• This space has turned into an unofficial Al Horford ranting ground, but it's not like he hasn't deserved the criticism. There is not a single thing he does consistently well right now after a career of doing a lot of things consistently well. We can debate the cause for that — age, poor fit, coaching, etc. — but the bottom line is that he has either flat-out sucked or been actively harmful for stretches of this season.

Milwaukee is one of the team's Horford was signed to thrive against. Billed as a player who could help slow down Giannis Antetokounmpo, Horford did that in exactly one game on Christmas and has spent the last two games against them looking like he was playing in quicksand. He couldn't guard Giannis Antetokounmpo in a playoff series if he had a motorized vehicle to follow him in, because if he could, Giannis probably wouldn't have taken the Celtics to the woodshed in the playoffs last year.

It is not a system that plays to his strengths, we can say that. Horford spends a lot more time just hovering above the break, and he's not a guy who has historically been someone you just want to have standing on the perimeter and launching a wave of catch-and-shoot threes.

But it's not like he's offering much else to Philly when they ask him to do other things. He is meandering in pick-and-rolls, not committing to getting to the rim and often just sort of drifting into space their limited ballhandlers need to get through. There haven't been more than 1-2 stretches this year where you felt like he did something to tilt a game with effort, which is a weird but true thing to say about a guy who is supposed to be Mr. Professional.

The guy's track record suggests you don't want to completely give up on him, but man, we are trending where this is going to be talked about as one of the worst contracts in the league. And given how poor the fit with Embiid has proven to be, his trade value was already capped to a certain extent. This is looking like an outright disaster.

• Tobias Harris tends to avoid the level of criticism Horford receives, but a game against the Milwaukee Bucks brings into focus what teams tend to expect when they pay someone $180 million over five years. Khris Middleton has an almost identical contract, and in fact makes slightly less money after agreeing to an extension during the same time period, and the Bucks wouldn't swap those two players in a million years. One guy is in the midst of a potential 50-40-90 season, the other is merely decent with breakout games in situational matchups.

I don't count other people's money as a means to degrade them, but it is significant in what it signifies from a team-building perspective. Harris was meant to be the guy who could help carry them on offense during tough times, make big shots in crunch time, and be somewhat of a spiritual leader in the locker room.

He has lived up to the last responsibility, but the limitations he has as an offensive hub are quite obvious at this point. Without the handle to regularly create separation, he ends up settling for tough looks, which look great when they go down but most often are ill-advised shots. He doesn't play with enough physicality to get to the free-throw line, and the most disappointing thing of all is that his outside shooting has regressed in a big way since arriving in Philadelphia.

His deal is not on the Horford scale, because at least he fits within the team construct and isn't outright useless. But he shouldn't be treated with kid gloves because he seems like a good guy.

• While we're on the subject of front-office related gripes, the Sixers should not be so ill-equipped to handle the loss of a single guard, even one as talented as Ben Simmons is. It turns out that when you ignore guard and guard/wing skills systematically for years, eventually that's going to show up on the floor. In a league where guards have more influence on the sport than they have had at any other time in history, this Sixers team is trying to play in a style that would have looked more at home in 1965.

Again, as detailed in the Horford section, Brown certainly doesn't get a pass for how the pieces in place are being used. He was influential in the front office in the past, and even now, he's still reluctant to really lean into pick-and-rolls as a staple of the offense, as he was even when he had a very good pick-and-roll guy in Jimmy Butler. They had the All-Star break to work on tweaks and rotation changes, and they have come back looking like the same erratic team they did before.

But it's not like the Sixers have Lou Williams waiting in the wings to torch people off of the bench. Alec Burks had plenty of opportunities to run these sets on Saturday and built a house of bricks. And that's one of their better options on bench units! This has been a failure from top-to-bottom and has its roots in decisions that date back years.

• One last front office related thing, since that game isn't really worth analyzing, is that for all the (rightful) attention on Brett Brown's job security, there's perhaps an even stronger case to be made that an early exit in the playoffs should warrant a complete housecleaning in Philly. Keep in mind that this is effectively the same exact group of people who were in place under Bryan Colangelo, and that Elton Brand wore full responsibility for personnel moves over the last year when he spoke to reporters at this year's deadline.

If we can all sit here and point out how disastrous different contracts are, how poor the different pieces together, and potentially speculate about the need to make major moves to fix this, what's the justification to leave everything in place that led to this moment?

• A subplot that I think warrants monitoring moving forward: if this team is really the fake contender they appear to be when they go on the road, I wonder whether ownership's stance on paying the luxury tax changes.

It is one thing to stick out your chest and say you'll spend what it takes to win when you believe you have a contender on your hands. When you're staring down a huge bill for a team that is hovering in the middle of the pack of the Eastern Conference? I'm not so sure a group that has routinely sold second-round picks for cash has the stomach for that.

All speculative at this point, but the Warriors came off an unprecedented run of success and still made a concerted effort this year to get under the tax at the deadline with a team that isn't competing. Rich people generally don't get and stay rich throwing good money after bad.

• I thought Joel Embiid did a good job of keeping the Sixers in the game for the first 24 minutes despite not having his best stuff on offense. All of Giannis Antetokounmpo's makes early were on tough looks, and Embiid's commitment to slowing him down at the rim made Philly's crowd-and-recovery effort easy on the perimeter, which kept the Bucks down from deep in the first half.

But eventually, Embiid started chasing the game and was burned for it. After two fouls early in the second half put him in trouble, he never quite found the line of physicality the rest of the night. Coupled with a terrible night shooting the ball, and that was all she wrote for Philly, who had no chance to pull this game out on the road without the big man having a big night.

If you're the sort of person who wants to look at this game and get mad that Embiid made claims about being the best player in the world two days ago, I won't hold you back. I love trash talkers, but I mostly love trash talkers who back up their words. Simmons or not, Embiid's team got punked by the likely back-to-back MVP on national television. The difference between the two men this season has been absolutely ridiculous, and I say that as someone who doesn't think the talent gap between them is that much. One guy has a team built around his strengths, sure, but he also comes ready to step on people's necks night after night, and that hasn't been the case for Embiid this year.

• Before the game, ABC had NBA legend Oscar Robertson on to talk about both teams, and they spent a lot of that time trying to get Robertson to weigh in on controversial topics like "What should Giannis do in free agency?" that the fanbases watching the game didn't want to talk about.

But the best part was Robinson side-stepping each of those questions to weigh in with his own assorted opinions, like the following:

Oscar Robertson expertly ignoring questions to throw out takes about both teams during pregame. Asked who needs to change more between Embiid and Simmons to make this work:

Let the record show that a guy who retired five years before the NBA instituted the three-point line places a bigger premium on shooting than the Sixers' front office did last summer. I know running a billion-dollar franchise is difficult, but it's not as difficult as the Sixers have made it look.

• Any other team in the league would probably get some benefit of the doubt when it comes to handling player health. Back injuries are tricky, and Ben Simmons wanting to get back on the floor for an important Eastern Conference matchup is understandable.

But it obviously casts some doubt over their evaluation and decisionmaking when Simmons tweaks something within the opening five minutes of the game, especially when you consider their history with Embiid, who was on the floor at times earlier in his career when he was obviously hurt and allowed to play through it anyway. Hell, even this season they allowed him to finish the Oklahoma City game with a gruesome finger injury that required two trips to the locker room and eventually surgery.

They have cycled through leaders in the health and performance departments, perhaps they should consider an exorcism.

• Stars around the league get calls every night, which means the help Giannis Antetokounmpo gets from time-to-time isn't unique, but it does seem to me that if Simmons and Embiid were able to get away with as much physical play as he is, they would average roughly 4-6 more points per game.