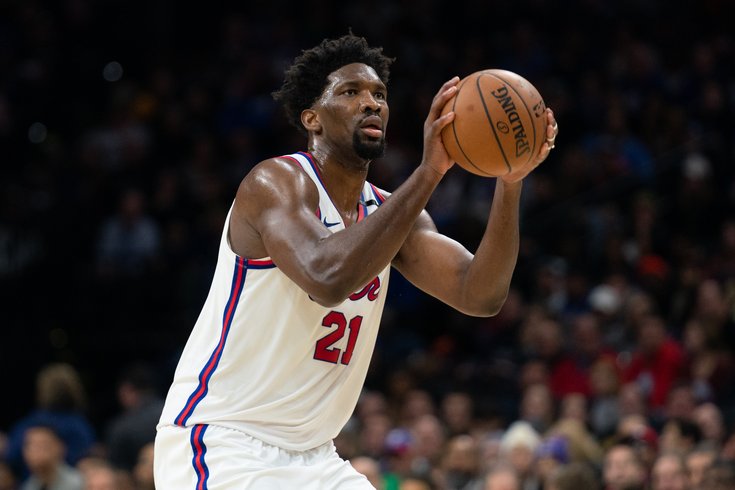 Joel Embiid had a monster of a game Thursday.

The Sixers nearly managed to turn an early 20-4 lead into a home loss, but through a combination of defense, tough shotmaking, and a sensational Joel Embiid performance, they would eventually come up with a 112-104 win.

• This was a rare opportunity for Embiid to show what the Sixers might look like molded in his vision, and early in the game, he looked excited for that moment. Embiid was barking out orders on defense, expertly navigating pick-and-roll coverage while dealing with two lob threats, and running the floor with gusto, all things he has struggled to do on a consistent basis this season.

He was the focal point on both sides of the ball as Philadelphia went on a 20-4 run to start the game, and stretches like these leave you wanting more when he has downturns in effort and focus. Perhaps more importantly, it was Embiid who managed to sustain the offense in lineup combinations of all kinds, when playing from in front or behind, and who served as their spiritual leader throughout the night.

Embiid had some weird stretches on the defensive glass where he allowed DeAndre Jordan to have his way, but he more than made up for it on the other end, where he had one of the best games attacking the offensive glass that he has had all season. I won't boil this all down to effort, because there is a strategic choice between chasing offensive rebounds and getting back to set up shop on defense, but he played with a completely different mentality even allowing for that caveat. And that is a reminder of who this guy can be when he sets his mind to it – an unguardable, unstoppable force who earns extra possessions and can't be denied.

This is the Embiid we grew accustomed to seeing over his first few seasons, and one we haven't seen enough this year. They needed every bit of what he gave them, from the early jumpers to the late free throws to the insane rim protection in the game's biggest moments. It is good to know that level of performance is within him still.

• Alec Burks was a man lost in the shuffle in the first half of this game, standing in the corner and mostly imitating departed Sixers wing James Ennis III. That is decidedly a waste of Burks' skill set, a he's a decent three-point shooter but certainly not a reliable knockdown guy.

Burks didn't get the chance to run backup point in the second half, but the Sixers did get the ball in his hands more, and this may shock you but he actually looked relatively competent in that role. Throwing him into some pick-and-rolls and pick-and-pops with Embiid and Al Horford, Burks got downhill in a hurry, and his lack of a conscience is actually a good thing on an offense that can grind to a halt at the worst possible times.

They especially needed Burks in overtime, with tired legs setting in and everyone in need of a little individual heroics. He was there to deliver, tossing in an and-one layup that had no business going in and somehow managed to drop anyway.

This isn't super complicated. Use the guy you acquired at the deadline in the way that suits him best, which also happens to be an area that your team needs a boost in, and you'll probably maximize his value in the rotation.

• Tobias Harris never got it going from deep on Thursday night, but playing at power forward, the Sixers have a much easier time leaning into his skills as a four. In the second half especially, they weaponized his strength against smaller matchups, with Harris sealing off defenders and depositing some easy baskets at the rim on hi-lo sets.

I don't know if we'll see this at higher volume with a healthy Sixers team, but Philly also used him as a screener in some pick-and-pops against Brooklyn, which helped create some of the only clean driving lanes Josh Richardson had all night. It's a win-win for Philly, because teams either have to concede easy-ish looks to Harris on the perimeter or concede driving lanes for a group that has a bit more handling juice than they had pre-deadline.

• You can't pin all the blame on Al Horford for how disastrous his tenure in Philadelphia has been so far. He was initially asked to play a role that doesn't make any sense for him, and that's on the front office for misidentifying how the pieces might fit together, and the coach for not finding a way to incorporate a very skilled player into the team.

That being said, it feels like it would have been hard for Horford to have a steeper drop off than the one he has had since joining the Sixers. It doesn't matter where he is on the floor — in the corner, above-the-break, or from his favored mid-range spots — Horford's touch has been horrific this year after a long career of killing teams from all over the floor. And though the Sixers have made schematic adjustments to lean into his strengths on defense, he hasn't moved well a lot of this year, which brings his flaws (like sub-par rebounding) into greater focus in Philadelphia.

That he couldn't be on the floor in crunch time on a night when they were without Simmons is pretty remarkable.

• Starting Raul Neto to preserve the bench rotation in Ben Simmons' absence made some sense even if Neto should be on the outside looking in with this rotation. Early on, you would have been hard-pressed to say it was a mistake with the Sixers cooking Brooklyn.

There were two problems that caused things to spiral from there for Neto:

You can live with one of those things if business is being taken care of on the other end. That was not the case, and things got ugly fast. Brown shrunk his role in the second half, and he needed to.

• It is true of most star-heavy teams that they're in trouble when one of their main guys is out, but the Sixers are uniquely unequipped to handle Simmons' absence with the way they are built. I have said this about 300 times over the last few years, but their lack of ball-handling and shot creation is shocking for an NBA team playing in 2020.

Eventually, you're going to have to invest in guards in some meaningful way, whether that's through the draft or free agency or further trades. And, as we'll get to below, it would also help to actually call upon the guards you do have.

• Nobody has a higher ceiling with a lower floor than Richardson that I can remember playing for the Sixers. He'll make a sensational play on one end and then look like he has never played basketball before on the ensuing possession at the other end. 50+ games into the season and I still don't quite understand him as a basketball player. The guy played big-time defense on Spencer Dinwiddie at times, so you can at least give him that.

• If defensive three-seconds calls were ever properly enforced against Embiid, the Sixers might be in a lot of trouble. When he's up against centers who are no threat to shoot, like Jarret Allen and DeAndre Jordan both are for Brooklyn, Embiid barely even tries to pretend like he's going to defend his man. A couple of steps and a weak point toward someone on the perimeter, and he apparently has done enough to avoid the call.

Good for him, he gets away with it, so why not continue to do it? It's just very strange to watch.

• The Sixers got off to a 20-4 start on Thursday night, and it looked like they might be on their way to a laughably big victory when Embiid checked out for the first time. At least, you would have been led to believe that could happen if you had never watched the Sixers play basketball before.

There are gripes to be made with the players, but there were so many things about the lineup/rotation that made no sense from a coaching perspective and fall on Brett Brown. Burks is a guy whose primary strength is being a credible three-level threat out of pick-and-rolls, and Brown simply stuck him in the corner away from the ball in the first half. If that's because he's playing in a lineup where Simmons is running the offense, it's one thing, but doing that in service of letting Neto and/or Richardson run the offense is insanity.

Speaking of Richardson, I would have thought we learned a long time ago that Richardson in high-volume minutes at point guard is a mess, if not based on Philly evidence than definitely based on his time in Miami. But Brown asked him to carry second units anyway, and he asked him to do so in lineups where Embiid and Horford shared the floor together, which are tough enough to make work even with elite play everywhere else.

When you give up big leads because guys go cold or the opponent starts making a bunch of ridiculous shots, that's one thing. But the Nets went on an absolutely preposterous run as Brown made choices that didn't make any sense on paper and, to the surprise of no one, looked awful on the floor. You don't get the benefit of the doubt if you throw out groups that seem obviously doomed to fail.