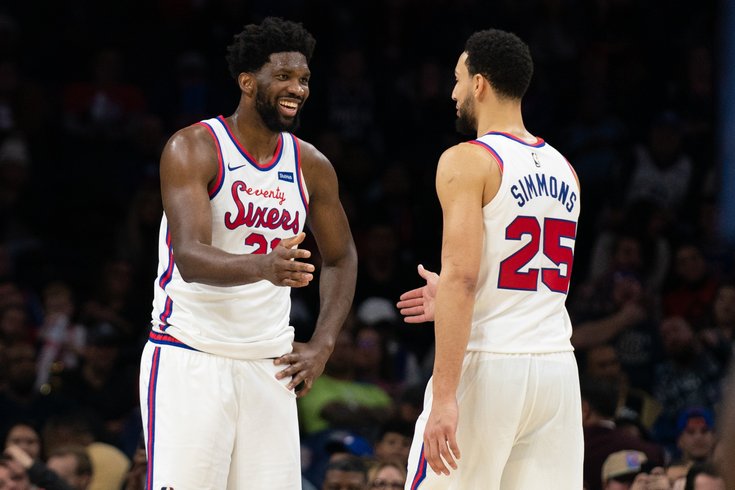 At All-Star Weekend in Chicago, there was a small but important development for Joel Embiid. Finally free from the shackles of a splint on his left hand, Embiid played the All-Star Game with nothing more than buddy tape on his fingers, and that will be the new norm for Embiid, with specialist approval and all.

If there was a time to flip the switch, to focus down the stretch, to prepare for the seriousness of playoff basketball, it is now. Embiid's return to full health could not come at a better time for the Sixers. Beyond his physical conditioning, Brett Brown believes his franchise player is in a better headspace than he has been in all season.

"I think he is in a space that is excellent as it relates to his excitement seeing this final third home, to grab the team by the throat and lead us in a bunch of different areas," Brett Brown said Wednesday. "I see [his mental] conditioning being ever-apparent, I've been with him a long time. When I look at him, I talk to him and I hear his words, we're always sort of like you would be with your children, judging their body language and all that. I just think he's in a really good space."

"We just went up and down hard for about 60 minutes, saw no drop-off," Brown added on his physical fitness. "If you study the tape from the other night, and you watched Joel Embiid run the floor, and some of his rim runs just going rim-to-rim, we all would say shoot, it can't get any better than that."

How much of that mental sharpness is a product of Horford's move to the bench? Tough to say, especially without any input from the big man himself. There are a number of factors that would have him locking in mentally at a different level, most importantly that the playoffs are finally almost in view.

The All-Star Game may not matter to many locals, but the reinforcement Embiid received there shouldn't just be glossed over. With the game's greatest players all assembled in one place, it was Embiid who was called upon to try to slow down a lineup of LeBron James, Anthony Davis, James Harden, Chris Paul, and Kawhi Leonard in the game's final minutes. With multiple All-NBA caliber options available, Embiid got the message loud and clear — you can hang with and perhaps even beat these guys.

There was another positive boost for his teammate, Ben Simmons, who thrived in that setting as one of Team LeBron's best two-way players in Chicago (not that the defense is ever much to speak of in that format). It is clear to everyone inside and outside of Philadelphia's locker room that those two are going to be the driving force behind any improvement or ascension for the Sixers down the stretch.

"We've all talked about it, but those two are the guys who keep things moving, and they have to really embrace each other and have that respect for each other's games," Tobias Harris said Wednesday. "Their games are different styles, but in a way they both do complement each other on the floor. I've said that since the day I got here and I truly believe it. When they are out there and both dominant like the Clippers game, you can just see, it's like they've played together since they were young kids."

"Every game we're continuing to find that balance, continuing to figure out each other's personalities on the floor and how we play and coexist. [Those] two especially and most importantly have to embrace that night in and night out for us to be a successful team."

It would probably be more accurate to say it looks like Embiid and Simmons are playing against young kids when things are really rolling.

In their final pre-break game against the Clippers, they ran actions fans have become familiar with over the years, like snug pick-and-rolls near the basket, lobbed entries over the top of the defense, nothing overly complicated. But good offense does not need to be complicated offense. When you have guys that are this big and skilled, you can find a mismatch.

The Sixers haven't always persevered with those sets anyway, for a variety of reasons. When Jimmy Butler and Harris arrived last season, it was time to expand the playbook. When JJ Redick was here, it made more sense to use him in sets with both players to maximize their individual effectiveness. But as the lineups have changed and the core has solidified, it is time ask them for more.

"At times it really was one of the lowest efficiency plays that we ran. We've persevered, and I still think when you fast forward this thing out and they're both like 30 and 28, that it's going to be a primary look for those two and then you just got to space those three shooters well around it," Brown said Wednesday. "It's deeper than just sort of an action, growing those two with that spirit in different places on the floor interests me a lot."

"Spirit" is an oft-used Brown buzzword, and the young All-Stars showed a lot of it in Chicago, predominantly when they were asked about how the pieces fit together and the cohesiveness of their partnership. Whether you want to point to a series of positive Instagram posts, some backslapping during the game, or the quotes they gave to reporters over the weekend, they have said all the right things about wanting to win together. Embiid's occasional passive-aggressiveness about Simmons' shooting is the worst it has ever gotten, and they have otherwise walked the line perfectly.

"It kind of is newsworthy because there's so much talk about, can they coexist, how do they play together, are we going to play fast or are we going to play slow? They coexist as it relates to people getting along just fine," Brown said of their comments in Chicago over the weekend. "The narrative grows and swells for different reasons from time-to-time. To be in Chicago and to talk about one another in that environment on different teams, it didn't surprise me."

"I would be lying to say if I wasn't thrilled to read what I read, but it doesn't surprise me. I just think it validates to the rest of the basketball, hoops world that life's not as bad as sometimes it's made out to be here in Philadelphia."

The coach and I can disagree on this point — it has not always been great here. Not for a team who entered the year with Finals expectations and finds itself in fifth place, not for a team that just benched last year's big-money acquisition to unclog the lineup.

It's time to take the rhetoric and promises and put them to action. The Sixers are ultimately going to go as far as Embiid and Simmons can take them, and they're in optimal shape heading down the stretch. Now it's time to see what they're about.