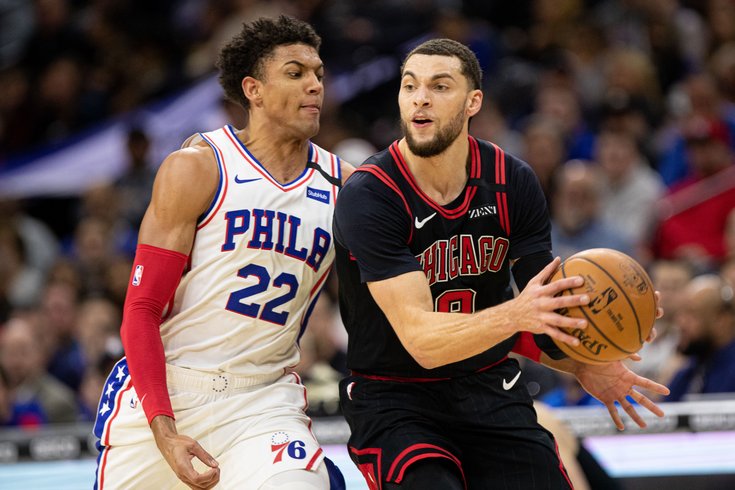 The fate of the 2019-20 Philadelphia 76ers is going to hinge, naturally, on the health and production of Joel Embiid and Ben Simmons. Any suggestion to the contrary ignores decades of NBA history or even just the last few years of Sixers basketball — when those two play well and play hard, the Sixers tend to win.

Though the Sixers may not be churning through developmental players the way they were four to five years ago, you could argue their development of young talent is more important than ever. With stars in place and cap space drying up, getting the most out of the young players they do have is imperative for the Sixers to sustain a competitive run moving forward. Matisse Thybulle may not decide the title, but his reliability looms large looking forward at potential playoff matchups.

In a past life (read: before I decided parent/teacher conferences weren't in my desired future), I was preparing to be a teacher, where part of the gig is helping to create individualized education program (IEPs for short) for different students based on their respective needs. They're just as relevant to students who need an increased challenge as they are to those lagging behind their peers, and broken down into different focus areas that you check in on throughout the year.

So rather than dish out some letter grades, let's check in with the young and developing players on Philly's roster coming out of the break, and see how they're doing with what I would have considered "realistic" season goals for them.

Progress: It seems funny to think now that there were questions about Matisse Thybulle's ability to translate his play within Washington's zone to the man-to-man friendly confines of the NBA. Forget for a second that zone defense is more prominent than it has ever been and consider that Thybulle was a borderline cheat code within the zone, which should have suggested to everyone that he would be just fine no matter what style of defense his team was playing.

Thybulle sits 17th in steals per game for the entire NBA in spite of averaging just 20.3 minutes per night, and normalizing stats per 36 minutes moves him all the way up to third, a fair reflection of his impact in a limited role. What's more important is that Thybulle has proven capable of taking on defensive assignments of all sorts, covering guards like Kemba Walker and big wings like LeBron James depending on the matchup. That versatility allows the Sixers to move other chess pieces around or put them on easier assignments, which is important for guys like Ben Simmons and Josh Richardson, who also shoulder heavy offensive loads.

His lone defensive concern at the moment is a jumpiness we see in many young defenders which gets him caught reaching and fouling on tough covers who know better. Thybulle's ability to play without fouling will determine whether he remains an effective role player or rises into a bigger role from mid-April onward.

The bigger surprise early on for Thybulle was his three-point shooting, which was at least a partial question mark after a down year from deep during his senior year. Projecting him moving forward is a somewhat tough task, with Thybulle toggling back and forth between ice cold and unsustainably hot month-to-month. With guidance from the coaching staff to focus on "his shots" instead of jacking like JJ Redick coming off of screens, Thybulle has shown promise as a standstill shooter.

You could argue his home-road splits are the most significant data point to keep an eye on. Thybulle has made 47 percent of his threes at home and just 26.7 percent on the road, an almost unfathomable gap in effectiveness that helps to explain the team's poor road record. This casts some doubt on his ability to be a high-level rotation player during the playoffs, as the pressures on the road in the postseason would only seem to make his life tougher.

Progress: Not much to speak of. The Sixers haven't asked Thybulle to do much creating for himself, and outside of the odd closeout attack, he's there to space and keep the ball moving. This is another potential weakness for opponents to exploit in the playoffs, but unlike when Robert Covington dealt with this problem in the 2018 playoffs, the Sixers have multiple creation options to take the pressure off of him.

Progress: Korkmaz's form and production in international play always lent hope he could be a productive NBA shooter. But the results weren't there during his first two NBA seasons, leading to Philadelphia declining his third-year option in pursuit of 2019 cap space.

Bringing him back turned out to be one of their better bets of the summer. Well aware of his limitations, Korkmaz only needed to do one thing to stick in the rotation, and he has delivered, making 39.2 percent of his threes on five attempts per game. Making a major leap in effectiveness while increasing his volume has been a massive boon for a Sixers team in desperate need of anyone who can shoot.

Progress: Korkmaz's understanding of Brown's system is better than it has ever been, and he does compete hard defensively, which matters. But ultimately Korkmaz is giving up too much strength on a lot of nights, and when he's not, his lack of agility might get exploited anyway.

The Sixers are one of the teams best-equipped to hide guys on defense in the league, and even they haven't been able to avoid Korkmaz getting targeted. It's a tricky situation to navigate because he doesn't have a singular style of player he matches up well against. But the Sixers knew this when they brought him back and certainly couldn't have expected much from him.

They have received more than they bargained for elsewhere, with Korkmaz's shooting becoming such a weapon that it has allowed other parts of his game to shine through. Stepping into some of the old sets JJ Redick used to run with Ben Simmons and Joel Embiid, Korkmaz has added some in-between game on top of the improved shooting and weaponizing his pump fake has been a difference-maker.

Primary objectives: Protect the rim at all costs

Progress: Pelle's inclusion on the roster, even on a two-way deal, was a strange decision from the front office after signing Al Horford to a massive deal in the offseason. What use could they have for a big on a two-way contract, particularly after signing a decent third big in Kyle O'Quinn?

Plenty, as it turns out. After blowing through his two-way service time, the Sixers eventually waived Jonah Bolden to get Pelle on the 15-man roster. And while Pelle doesn't bring the same theoretical versatility that Bolden did, his singular skill around the rim is superior to any one thing Bolden did during his time in Philadelphia.

If Pelle is to become a legitimate rotation guy in Philly or elsewhere, however, he is going to have to figure out a way to block shots and deter drivers without fouling. He averages a whopping 7.7 fouls per 36 minutes, a side effect of having no fear of getting dunked on. That doesn't just limit his own minutes, it puts the team in a position where they're in danger of being in the penalty, and that's especially tough for a team like the Sixers that wants to play physical defense.

Secondary objectives: Own the Frosty Freeze-Out

Progress: After a disastrous performance as a lead ballhandler at Summer League, there were flashes of hope during training camp and preseason that he could be the bench shooter they were looking for. Milton's performance in the G-League last season was exactly the sort of production a team would want to see from a fringe player, with Milton putting up big numbers and separating rather easily from the competition.

But after a solid start to the season was derailed by injury, Milton has struggled to find consistency in form and playing time for a variety of reasons. Korkmaz has been far better as a shooter, and when Josh Richardson has been healthy there haven't been as many backup creation reps to go around to the rest of the group.

There is some hope for Milton, who was thrust into a starting role after a long period of inactivity and acquitted himself okay. He has enough shimmy to attack closeouts and with Simmons' reinvention as an attacker from the elbow/as a screener in pick-and-rolls, Milton's jack-of-all-trades, master-of-none act might play well on the second unit. In 11 games played between January and February, Milton managed a 2.5 to 1 assist-to-turnover ratio, which would be an excellent mark if he improves it over time.

Unfortunately for him, Alec Burks seems like a natural candidate to take the reps he might otherwise have been afforded this season, so I expect his opportunities to dwindle down the stretch. Milton hasn't shown anywhere near enough as a pull-up shooter either from three or from mid-range, which will limit his effectiveness as a pick-and-roll player unless he makes dramatic improvements.

Progress: If you are looking for a reason Milton hasn't received a bigger opportunity this season (outside of an early injury), this is it. He has been roughly as bad as Korkmaz when it comes to getting picked on defensively, and with Milton shooting much worse than Korkmaz, it hasn't even been a contest for minutes. He has some physical limitations that hold him back, but he has plenty of room for growth on the mental/awareness side of the game, where his off-ball attentiveness should be a point of emphasis.

Progress: Smith had the most to do of any young Sixers player coming into the year. Forget the individual skill components for a second and remember he was playing power forward in college before suffering a broken foot and severe allergic reaction that caused him to miss most of his first year in the league.

Unfortunately, that time away from the game has buried him in the pecking order, and what little we have seen from Smith suggests the road to him being a productive NBA player is long and winding. Smith looked lost in the shuffle during the preseason and his stock hasn't rebounded much, if at all since then.

League personnel at the G-League showcase this winter expressed concerns about where and how he fits in, and his value on the trade market at the deadline was viewed as "minimal." While the Sixers drafted Smith fully prepared for him to be somewhat of a project (and perhaps with an eye toward executing a trade for a star that summer), there's no doubt they would have liked him to be further along than he is at this moment. He can make plays with his tools, but those are still carrying him to make up for a lack of feel.

The good news? He's shooting 36 percent from three in the G-League this season, a positive step forward for a guy who needs to be productive as a catch-and-shoot player to have a chance to play in Philadelphia down the road. Unfortunately, that is basically the only usable data point for him 1.5 years into his NBA career, as he hasn't played enough minutes in the big leagues to determine much one way or the other.

Barring a complete disaster, there's effectively no chance he plays meaningful minutes for Philly down the stretch or in the playoffs. And with the Sixers pressing to win now in the near-term, it is going to take a hell of an offseason for that to change next year.