Who should the Sixers' fifth starter be? 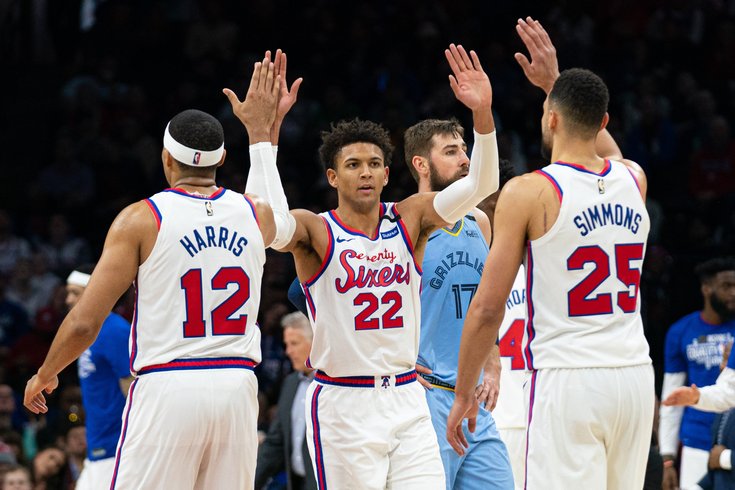 In their final game before the All-Star break, the Sixers took what appears to be the first important step toward fixing their fit issues. Al Horford's move to the bench didn't have a significant impact on his minutes played, but it shook up a group that needed a fresh approach down the stretch run of a disappointing year.

There is still work to do, even if many of the Sixers have transitioned into mini-vacation mode. Brett Brown bunkers down during this period of the season every year to examine some potential changes as they head toward the playoffs.

"I lay stuff out all over the place and you come back a little more zoomed in," Brown said last week. "You went to the big question, of what do you think about [Horford], I think about a lot of things, that being maybe gold. And then you get into silver and bronze, of like what's going on with Glenn [Robinson II] and Alec [Burks], and what's that mean with that group we already have with [Furkan Korkmaz] and [Matisse Thybulle]?"

Fair questions indeed. So let's zoom in on an issue that impacts all of those guys — who should be the fifth starter in Horford's place moving forward?

It was the first place Brett Brown's mind went, and it's a direction that makes sense on paper. How do you help out the Embiid-Simmons duo? By putting guys on the floor who can shoot and attack off of the dribble. Korkmaz does both.

The numbers paint a perfectly accurate picture of Korkmaz's step forward this season. He has shot the ball at a high-level, particularly when he is sticking to catch-and-shoot attempts (43 percent). Next to a bunch of high-usage players in the starting group, those looks would come fast and frequent for Korkmaz.

Those numbers, however, undersell how huge his step forward has been. He is a good enough shooter that teams are aware of him on scouting reports, rushing to close out on him instead of daring him to beat them. This has turned his pump fake into a weapon, allowing Korkmaz to either create an open three or an uncontested drive for himself with a simple up fake. That is powerful, and when the Sixers can start playing four-on-five basketball, that's always a good thing.

Korkmaz has been more than just a shooter, too. The Sixers have tapped into the JJ Redick portion of the playbook as he has come on, running a two-man game with Embiid, inverted pick-and-rolls, and weaponizing teams sagging off of Simmons by running him through handoffs. He has been quietly important for a team that often struggles to score.

But there are times when the Sixers are playing four-on-five basketball on the other end of the floor with Korkmaz out there. He has made strides on this end, with commitment and increased time in Brown's system combining to make up for his physical weaknesses.

You just can't always hide a lack of agility and strength, and players of all sorts can target him. Stronger players blow right through him, quicker players dance around him, and he can be taken out of plays with good screens, a problem for a guy who is often chasing opposing shooters. This is not as big of a problem in the regular season, but against better quality lineups and teams who can dictate switches at will, it is a fatal flaw in the plan.

There is no better lineup to protect him on defense than the group he would start alongside, but it seems like a temporary solution they would have to abandon when the real season begins. That being the case, using him in a backup spark plug role feels like the right choice now and moving forward.

Thybulle is the only player who brings a potential elite skill to the table of this group. With all due respect to Furkan Korkmaz's shooting, which is electric when he is on, Thybulle's ability to create turnovers is almost unparalleled for a player his age, and perhaps at any age.

If the Sixers want to continue pursuing the goal of building a defensive juggernaut, Thybulle helps them accomplish that, albeit in a different way than they would with Horford in the starting lineup. It is speed and switchability over size and strength, and pairing Thybulle with Simmons in the starting lineup has the potential to get Philly off to a lot of fast starts in the turnover creation department.

The downside with Thybulle is multi-faceted. If his shooting comes crashing back down to earth, it's possible teams just decide to ignore him in high-pressure situations. There is a difference between being a regular-season shooter and a playoff performer, as many players and teams have found out the hard way. If Thybulle had more ballhandling craft, this would be a lesser concern, but it's not out of the question he could have a run a la Robert Covington in the 2018 playoffs.

There is also reason to wonder who would win out in a playoff-type setting, Thybulle or an opponent who can scout his tendencies. The rookie has said several times this year that repeat matchups with opponents have helped him get comfortable and not fall for the same tricks elite players use to draw cheap fouls. But opponents would also have an opportunity to put his youthful indiscretions on tape for an entire series, potentially learning how to turn his worst habits against him.

Those warts are legitimate. But if we're looking down the road, it's a lineup that needs time together with an eye toward the future. Thybulle will be a fixture on this team for years to come, and has already proven he can hang on the floor defensively in pressure situations. He has played just 18 minutes alongside the Simmons-Richardson-Harris-Embiid quartet this year (let's not talk about how bad the numbers are for them), and could use as much time next to them as possible to grow their chemistry.

Timing cuts, figuring out floor spots, and finding a rhythm together takes time. The Sixers have this final stretch together, and grooming Thybulle for an eventual closer's role makes a lot of sense.

Of the two players who joined Philadelphia at the deadline, Alec Burks is the guy who brings the more unique skillset to the table. But while his pick-and-roll chops give the Sixers a lift on the second unit, it is Robinson III who may be able to bridge the skillsets of the rest of the starting lineup better than anyone else.

Shooting? In the midst of a career year from deep (39.5 percent overall, 40 percent on catch-and-shoot looks), Robinson brings that to the table. Defense? He was the guy in charge of guarding No. 1 options on the wing for Golden State this season and is overqualified to take the weakest (or second-weakest) perimeter assignment for the Sixers.

Robinson has some of the same self-creation concerns as Thybulle, which is why he has never been able to fully leverage his athletic gifts and make a significant leap since entering the league. But years in the league have honed his cutting/slashing instincts, which he put on display while playing with the starting group to open the second half against the Clippers on Tuesday.

By going with Robinson over one of the young bench wings, you are able to keep Korkmaz and Thybulle in roles they've grown comfortable in, leaving them in place as a lot changes around them. That is something Brown has been known to value in the past, and it also gives both guys a better chance to succeed — their strengths shine and weaknesses are not as pronounced against second-unit competition.

Of course, there's a reason (beyond Golden State ducking the luxury tax) he was available at the deadline for minimal cost. If he was particularly good at any one thing, or if he was capable of being more than a context-dependent role player, Robinson probably would have found a more permanent home at some point in the last six seasons.

The beauty of Robinson on this team, however, is that the context is just about perfect for him. He will be the beneficiary of open shots, expected to create very little, and not need touches in order to lock in on his role and master it. On a team without a lot of touches left to go around, there is value in having players who will compete and thrive without them. That's Robinson.

Do I trust him any more in a playoff situation than I do the previous two players? Probably not. But as a method to see what the other four have together between now and mid-April, you could do much worse than starting Robinson III.