Al Horford's move to the bench ignited the Sixers. Where do they go from here? 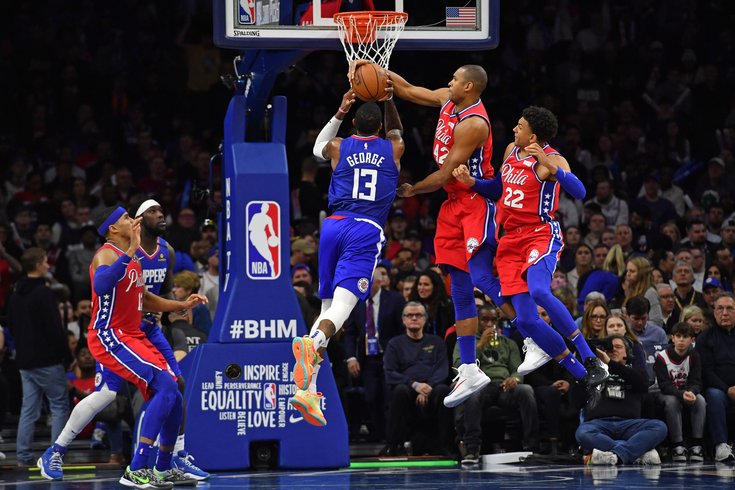 The conversation with Brett Brown, Al Horford told reporters after Tuesday's win over L.A., took place a day prior to his removal from the starting lineup. The change many Sixers fans have been pining for finally came to fruition on Tuesday night, with Horford demoted to the second unit for the first time since his rookie year, and it coincided with a 110-103 win over the Clippers.

"I spoke to Al about it, we're trying to find ways to help him and help the team," Brett Brown said on Tuesday night. "The time was appropriate to do it and see if we could sort of get that second unit going with Al. We did it with [Manu] Ginobili long ago, Al is obviously a quality player, and how I end games will be to me to judge. And so tonight we rode out those big guys for a while. They went small, so did I. And the decision to rotate was driven because of that.

"I said [to Horford], right now this starting group has been struggling, you've done nothing wrong. I keep myself up late at night trying to find ways to better coach it and fix it and let it coexist, and to date after 50-whatever games, we've struggled a little bit. That's one thing. And then the second thing is I feel like I can help you play at the level you can play at that we have seen. You've kept us up late at night with many scouting reports trying to figure you out. I think it can be a win-win. He's just all-class, he's a great teammate, he understood, and it was a high-level adult conversation that I appreciate, I respect."

A matchup with the Clippers helped to facilitate the move, and L.A.'s starting lineup would have been hard for any normally-constructed team to deal with, let alone one with two centers. Lou Williams, a guy who has been a professional bucket getter since making the leap to the league from high school, was often afforded the luxury of attacking whoever Philly's weakest perimeter defender was on Tuesday.

But presenting this as anything other than an attempt to jolt the offense would be foolish. Lineups with Horford and Embiid on the floor at the same time score a paltry 98.7 points per 100 possessions, 10 points below the mark for all lineups featuring Embiid without him. Fifty-five games into the year, the concern people had about their fit together has only increased.

And this is a team that doesn't need any more concerns regarding fit. Embiid and Ben Simmons tend to provide enough of those for people looking to figure out what's wrong with the team. So it was a perfect time for those two to make a statement, and a statement they made, combining for 52 points, 21 rebounds, 12 assists, and most importantly, a signature win.

"It's arguably the best game that those two have paired up with since I have been the coach here. I think that Joel and Ben, we put them in a lot of deep pick-and-rolls, we put them in a lot of hi-lo action," Brown said. "I think the way we played them helped them, in that Ben wasn't always the point guard...they co-existed as well as I have seen them co-exist, and played together in a very high-level way, a dominating, physical way. I think it was the versatility of Ben not always being the point guard."

A number that seems worth sharing here: 43 percent of Philadelphia's attempts on Tuesday night came at the rim, in the 86th percentile for all NBA games played this season according to stats tracked by Cleaning the Glass. During their recent road swoon, the Sixers never sniffed that number, with losses in Boston (21st percentile), Miami (10th percentile), and Milwaukee (a staggering 3rd percentile) all featuring a perimeter-heavy game for a team that is decidedly not perimeter-oriented.

With room to operate in the paint and a renewed sense of conviction, the Sixers played like the bully-ball team they were billed as. Simmons, often a gun-shy distributor, played the role of an attacker in one of his best games in a Sixers uniform, leading the team in field-goal attempts (22) in spite of a matchup with a player who has tortured him over the years.

There were flashes of the way they played together during Simmons' rookie year, where you felt as though their size allowed them to play the game at a level smaller players simply couldn't match. Even with the Clippers sagging off of Simmons as so many teams do these days, there is no defense for throwing passes at a height only one man can reach. And size, as it turns out, still needs space to operate.

Embiid and Simmons connected on a number of these entries throughout the game, wearing down the Clippers at the rim and keeping L.A. in foul trouble all night.

“I think the chemistry was just good, me finding him, him being a force down low and getting open. It just worked well tonight. I think we did a good job of getting mismatches and finding them,” Simmons said after the game. “I just love being a player. I don’t really put myself in any one position just because I’m so versatile. I’m able to play so many different positions and guard one through five. I’m just happy to be out there and playing.”

Their partnership worked so well, in fact, that it allowed them to absorb a plethora of new lineup combinations and changes that could have spelled doom against an elite Clippers team. Brown used two different lineups to start the first and second halves, introduced Glenn Robinson III and Alec Burks into fairly significant roles in the rotation, and asked Simmons to shift in and out of roles along the way, shouldering a heavy defensive burden to boot.

Those dramatic, somewhat erratic shifts to the rotation are what's really worth monitoring coming out of the All-Star break. When Brown discussed a potential Horford move for the first time last Friday, he labeled that decision of "gold" importance compared to other silver and bronze moves, and with time to sit down and develop a plan for the rest of the season, we'll get a chance to see what he thinks the rest of the season looks like.

For the time being, Brown did his best to straddle the fence between demoting Horford and making him feel like a critical part of the team. Embiid and Horford played alongside one another in the second half for around 9-10 minutes, and the two played almost exactly the same amount of game time. But Brown would eventually pull Horford for the final few minutes of crunch time in favor of Matisse Thybulle, and you have to wonder how feasible this plan is moving forward.

To Brown's point about potentially getting more out of Horford this way, there are just more opportunities to use him in pick-and-rolls and pick-and-pops with the team's roster post-deadline. The Sixers used him in actions with Tobias Harris, Burks, and others against the Clippers, and on a roster with less glaring weaknesses than it had a week ago, he will continue to get quality looks when they run these actions with/for him.

But Brown knows as well as anyone that Horford isn't Ginobili, an offensive machine who fit alongside anybody, and these Sixers aren't those Spurs, with years of playoff battles and reps together that further encourage sacrifice. Horford answered questions about the move to the bench like a professional but tried to move forward and downplay the significance of the change as quickly as possible.

"I just accepted it. Obviously not the position that I saw myself in, but it's what was best for the team," Horford said in the locker room after the game. "I honestly don't think it changes much from what I was doing before."

Accepting a diminished role over the long term is a different story, especially if we reach a point in the not-so-distant future where Horford loses out on crunch-time minutes altogether, relegated to a pure backup center role. They can dance around the issue by explaining it away as matchup-based, and Brown doesn't seem inclined to go there yet, but it's going to be hard to avoid. If spacing and offensive fit matters enough to demote him as a starter, why wouldn't that space matter when things slow down and tighten up in fourth quarters?

(To invoke the name Brown used, Ginobili's move to the bench in San Antonio was a method to give the second unit some more oomph, not because anyone questioned whether he fundamentally didn't fit with the Spurs' best players. No one had any reason to doubt whether he would be in San Antonio's closing lineup because he was a terrific talent who was capable of raising the games of everyone he played with.)

If this gets the ball rolling downhill, however, the Sixers will not care how much they're paying Horford to come off of the bench, or whether this is a half-measure in need of a better solution, or whether he is anything more than an overqualified backup. Tuesday night reminded everyone the two franchise building blocks can go out and control a game against elite competition if you put pieces around them that amplify their talents.

Now just imagine if they can take this show on the road.