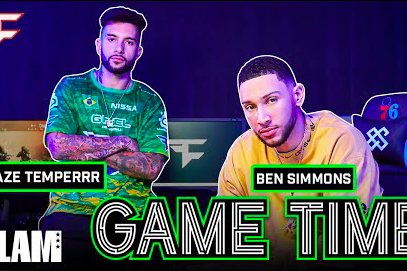 Ben Simmons and FaZe Temperrr appear together on the first ever digital cover of SLAM magazine.

That Simmons was chosen for this new frontier isn't a coincidence. As an avid gamer, Simmons represents a generation of high-profile athletes who have aspirations in the world of gaming.

The interview took place at Simmons' home, where he revealed his own gaming room, a fish tank with a poisonous fish and a candy kitchen stocked with all kinds of sweets.

When Simmons is gaming, he goes by the name "Simmo the Savage," which he has written in a custom neon sign outside his gaming room.

"I knew he took this seriously when he was probably 10 or 11 years old," Tribe said. "I walked in to get a glass of water or something at 2 a.m. in the house, and he was gaming with Dante Exum, just like up and bright-eyed, not going to sleep any time soon. They were playing 'Call of Duty' at the time. They were wired. He did that consistently throughout the years."

Simmons eventually plans to invest in the gaming world in the years to come and, with Comcast Spectacor building a $50 million esports arena near the Wells Fargo Center, he may have an opportunity to get involved here in Philadelphia.