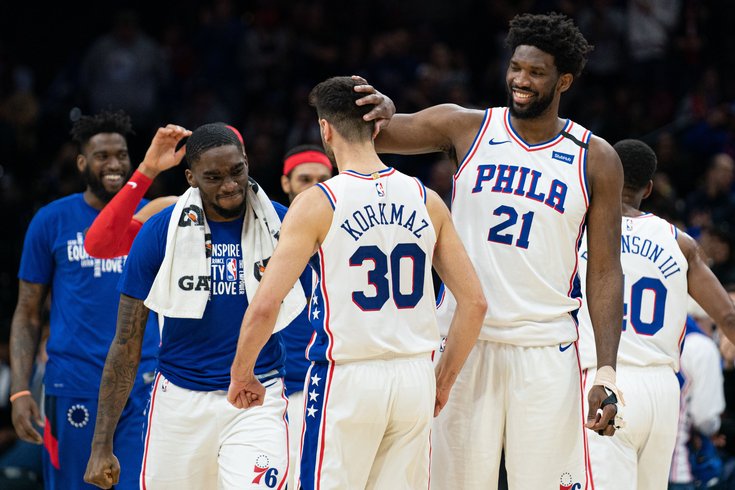 The Sixers have once again had an up-and-down week, one that saw them get blown out by the Heat and Bucks before they returned to Philly to easily handle the Grizzlies and Bulls.

But that 2-2 record can be somewhat misleading, as the two wins came at home over teams they should've taken care of, while the two losses on the road against Eastern Conference contenders highlights the season-long issue plaguing the team away from home.

And, amid all this, the Sixers acquired a pair of players — and parted ways with James Ennis and Trey Burke — at the deadline; they got Josh Richardson back from injury; they also dealt with questions swirling about potential locker room issues; they had one of their All Stars, Ben Simmons, publicly call the team soft while their other All Star, Joel Embiid, said he wasn't having fun; and, over the weekend, both Embiid and Al Horford took to shushing the home crowd after hitting a big shot. And that's not even mentioning the fact that Furkan Korkmaz was the Sixers best player this week, including back-to-back 30-plus point games to cap off the week.

As you can see, it was hardly a normal run for Brett Brown's team.

Still, much of that off-the-court drama is exactly that, and because they were able to finish the week with back-to-back wins, the Sixers more or less hovered around the same spot in most nation power rankings this week. Let's take a look...

Fifty-four games into the season, the Philadelphia 76ers sit in the 5-seed. That’s partly due to the recent five-game losing streak the Indiana Pacers have endured. It’s also noteworthy that the Sixers are three games behind Miami, which sits in the 4-seed. Prior to the season, I was convinced the Sixers would be a problem for the rest of the East. They should be flirting with history defensively. Instead, they currently sit in fourth in defensive rating. That’s very good, but it’s surprisingly down from what many of us expected their defensive players to be able to do. Maybe an even scarier part of this is their two stars on the floor together. Check out this stat from Friday:

A once very good duo has become mediocre this season — and it’s not because they forgot how to play basketball. Philly’s roster does not cater to its best players’ strengths whatsoever.

After this weekend’s action, that 2019-20 net rating with Ben Simmons and Joel Embiid on the floor together is actually down to +1.1 points per 100 possessions. It’s stunning to think just how ineffective it has been. It’s getting worse too. Here are the month by month numbers:

I’m not going to pretend to have potential solutions. I just know the Sixers have a real problem starting to trend. As the season goes along, they can’t play their two best players on the floor together. I’m open to the idea that this team is built for playoff basketball more than it’s built for regular season basketball. But this team needs to get right soon, so it can take some momentum into the postseason. Hopefully for the Sixers, that isn’t as the 6-seed.  [Zach Harper, The Athletic]

Breaking it down: Those numbers are scary any way you slice them, and it's hard to believe that the lack of production from the Embiid-Simmons pairing is leading to the Sixers' other issues. Of course, there's a counter argument to be made that this year, the players around the Sixers two All Stars have been less complementary than they have in the past. The lack the shot-creation of a Jimmy Butler type and the shooting of someone like J.J. Redick. Both of those guys made life much easier for Embiid and Simmons than the current supporting cast has been able to, specifically Al Horford, who has looked totally lost at times and finished Sunday's win over the Bulls with zero points on 0-6 shooting. The problem, as Zach properly points out, is that coming up with a solution for this current situation is easier said than done.

Philly saw its losing streak extend to four games with losses to the Heat and Bucks to start the week, but it rebounded to beat the Grizzlies and Bulls at home. The 76ers have the best home record in the league at 24-2, but are just 9-19 on the road. That's something they'll have to fix since, as of now, they won't have home-court advantage in the first round of the playoffs. Furkan Korkmaz was the unlikely hero of both of the team's wins this week, averaging 32.5 points on 13-of-20 3-point shooting against Memphis and Chicago.  [Colin Ward-Henniger, CBS Sports]

Breaking it down: Furkan was absolutely lights out this weekend. Here are the highlights of his career high 34 points against the Grizzlies.

He'd follow that up with a 31-point outburst (on 12-17 shooting) in Sunday's win over Chicago.

Do the 76ers belong to Joel Embiid or Ben Simmons? Let me submit a third option: Furkan Korkmaz! The third-year forward has erupted for a combined 65 points in his last two games, banging home 13 threes in the process. Korkmaz is, of course, a rotational piece, but he’s an impressive one at that. His emergence has been important in solidifying Philadelphia’s rotation in 2019-20.  [Michael Shapiro, Sports Illustrated]

Breaking it down: More deserved love for Korkmaz. Let's let him break down his performance this week...

Who needs Glenn Robinson III and Alec Burks when you have Furkan Korkmaz? With the Sixers returning home from an 0-4 trip, Korkmaz made 13 of their 25 3-pointers (on 20 attempts) in wins over the Grizzlies and Bulls, the two highest-scoring games of his career (34 and 31 points). Ben Simmons assisted on six of his 13 threes over the two games, with one handoff against Memphis being particularly slick. Korkmaz might be the poster boy for the Sixers' home-road differential, having shot 47% from beyond the arc at the Wells Fargo Center and just 33% outside it.

It will be interesting to see how Brett Brown fits Robinson (10 points in 12 minutes in his Sixers debut on Sunday) and Burks into a rotation that already has Korkmaz and Matisse Thybulle coming off the bench, given that Brown doesn't play more than three reserves together at a time. Josh Richardson returned from a six-game absence over the weekend and should be back in the starting lineup (where Shake Milton has been holding his place) soon enough.

The Sixers have won 10 straight games at home, ready to welcome Kawhi Leonard on Tuesday. It will be their first meeting since Game 7 in Toronto.  [John Schuhmann, NBA.com]

Breaking it down: This is the second spot so far in which we've seen the Sixers rise in the rankings this week. Unfortunately, that's probably not deserved, since their two wins came at home over over a pair of teams with a combined 36-51 record and their two losses came against teams they're currently chasing in the standings. While that loss to the Bucks certainly hurt, it wasn't entirely unexpected. The loss to Miami, however, guaranteed the Heat, who currently sit one spot (and two games) above the Sixers in the standings, the playoff tiebreaker.

"Make no mistake, we are disappointed in how we've played recently," Brand said. "The players understand how they have to do better. The whole organization has to do better."

Those comments were in reference to the 76ers' 9-19 record on the road, when they often resemble a team whose ceiling is a second-round playoff exit. Given that four of their remaining six games this month are against teams below .500, there will be few opportunities to truly evaluate the 76ers -- one is Tuesday's home game versus the Clippers and another is after the All-Star break when they travel to Milwaukee. In the meantime, expect new additions Alec Burks and Glenn Robinson III to give Philadelphia's bench some much-needed depth.  [Bobby Marks, ESPN]

Breaking it down: Unfortunately for the Sixers, as we wrote in the lead up to the deadline, moves on the margins like the ones the Sixers made last week likely aren't going to be enough to drastically alter the fortunes of this team. Given the way their starters have struggled lately, the onus is going to be on them to turn this thing around before the playoffs. The question remains, as it has been, can they make this work with the pieces they have?

Friday's 119-107 win against the Memphis Grizzlies ended a four-game Sixers slide in which they'd dropped all four games by double digits. Joel Embiid's inconsistent energy since returning from injury is an issue, and it's starting to feel like the frayed connection between him and Ben Simmons extends off the floor. On it, the results have gotten progressively worse for three years running, as Simmons' and Embiid's two-man net rating continues to trend downward.

The Sixers have high-end talent and the potential to beat anyone in the East—the Milwaukee Bucks included—when everything's working. And if they only ever played at home, they'd be the best team in the league.

Lately, though, almost nothing's been working. Philly went 2-2 this week and is under .500 since Christmas.  [Grant Hughes, Bleacher Report]

Breaking it down: Making matters worse for the Sixers is that during their recent stretch of .500 basketball (5-5 over their last 10 games) is that two of the teams their chasing in the standings — the second-seeded Raptors and the third-seeded Celtics — have been on an absolute tear, going a combined 19-1 over that same stretch. That has caused the Sixers to fall 6.5 and 5 games back, respectively. That's going to make it quite difficult for Philly to catch either of those teams unless they stop winning and the Sixers go on a big win streak of their own. It's beginning to look more and more difficult for the Sixers to get a home-court advantage in any round of the playoffs this year, something they should be chasing as hard as possible given their home/road splits this season.