NBA Power Rankings Roundup: Sixers on the rise coming out of All-Star break 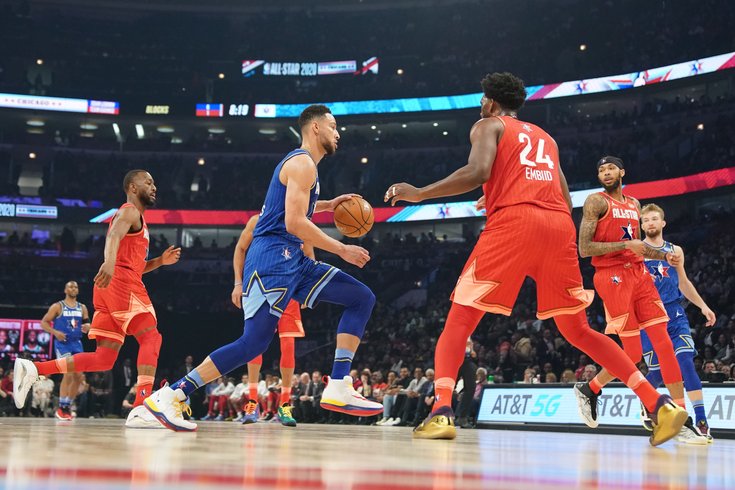 76ers guard Ben Simmons (Team Giannis) drives against teammate Joel Embiid (Team LeBron) during the first half of the 2020 NBA All Star Game.

Thanks to the NBA All-Star break, the Sixers have only played one game since the last time we checked in on where they stand in various power rankings. But what a big game it was.

After losing four straight, the Sixers (34-21) have now won three straight, including a big seven-point home win over the Clippers, which was their lone game last week but seems to be enough to have the Sixers climbing in most of the rankings out there. They'll return to action on Thursday night when they host the Nets in a nationally televised game (TNT).

In the meantime, let's take a look at where the Sixers are currently ranked with just about a third of the season (27 games) left to go...

What are you playing for? The NBA Finals. Is this me holding onto a preseason prediction in which I thought the Philadelphia 76ers were set up to beat the Bucks in the conference finals and therefore believed they would make the NBA Finals only to lose to their Western Conference counterpart? Who’s to say?! There is still part of me that truly believes this Sixers team is much better suited for the postseason than the regular season. Being able to build walls all over the court and lock down defensively while owning the boards is a recipe for success in the postseason, especially when you have elite talents to run the offense through. And yet, the Sixers disappoint. And continue to disappoint. I wonder if my wavering confidence in them is even warranted at this point.

Why this ranking? One game this week and it was over the Clippers. Should they have moved up more than just one spot? Especially over the Clippers, considering they just beat them? No. If that were the case, I would have moved them up another spot. I truly believe the Clippers are better and will not be swayed by a random February game before the break. The Sixers are good and the last three games have looked better than the previous four. But let’s remember they were just in such a confusing and precarious situation that their franchise guy sent out a cryptic tweet that caused booing at home.  [Zach Harper, The Athletic]

Breaking it down: I actually think this might be a little high for the Sixers despite their current win streak. Why? Because of what preceded it. Sure, the Sixers have won three in a row, but all three were at home and only was against a contending team. On top of that, it was just before the break when it's a bit easier to catch opponents sleeping. There's definitely something to be said about the Sixers not being the team caught looking ahead to the break, but the real test for Philly will come on Saturday night when they travel to Milwaukee. In two meetings against the Bucks this season, the Sixers are 1-1, with each team winning big at home. If the Sixers want to prove they can win on the road in the playoffs, Saturday night's game would be a huge confidence booster.

The Sixers won their only game of the week at home against the Clippers, with Joel Embiid and Ben Simmons putting up 26 points each in the win. But it was Josh Richardson who really impressed, scoring 21 points while hitting some huge clutch shots. If they can get consistent production from him and Tobias Harris, they could gain some momentum heading into the playoffs.  [Colin Ward-Henniger, CBS Sports]

Breaking it down: Again, a bit too high for the Sixers, especially since Colin has them jumping two spots in the rankings.

Breaking it down: There were no descriptions next to each team, so there isn't a lot to debate here other than their place in the rankings. And honestly, it feels about right. That being said, Marc Narducci did bring up a good point: 11 of the Sixers' final 27 games come against the eight Eastern Conference teams in the bottom 10 of his current power rankings. That should be a recipe for some success down the stretch.

The 76ers could finish the season with a 39-2 home record (they are currently 25-2 at home) and there would still be questions heading into the postseason. The concerns are based on a lack of mental toughness on the road, evident by a 9-19 away record. Some of those questions could be dismissed in the next two weeks. The 76ers will play at Milwaukee on Feb. 22 and head west to face the Clippers and Lakers on March 1 and 3. Philadelphia, however, has only one road win against teams above .500 this season -- the 115-109 win over the Celtics on Dec. 12.  [Bobby Marks, ESPN]

Breaking it down: Like most outlets, ESPN had the Sixers on the rise this week, climbing from 12th to 11th. No complaints here in that regard. Bobby Marks does have a good point that kind of cancels out that last point by Narducci. The Sixers have a few tough road tests coming up, and proving they can win away from home will be huge for them.

By bringing Al Horford off the bench for the first time since the veteran's rookie season, Sixers head coach Brett Brown may have landed on the key to maximizing the fit between Ben Simmons and Joel Embiid.

For one game, anyway.

Tuesday's 110-103 win over the Clippers ran Philadelphia's home record to 25-2 and saw Simmons play one of his best games of the season. He led the Sixers with 26 points, 12 rebounds and 10 assists. Embiid, enjoying more space inside as Philly put four shooters around him, bullied the Clips for 26 points and nine boards, getting to the foul line 13 times in only 28 minutes of action.

It's not ideal if Philadelphia's optimal rotation involves a $109 million free agent coming off the pine, but there's no denying the offensive breathing room Horford's benching created.

The Sixers hit the break on a three-game winning streak. And though their road struggles and chemistry concerns are real, they've still flashed the top-end potential that makes them a threat to reach the Finals.  [Grant Hughes, Bleacher Report]

Breaking it down: I thought B/R was overly tough on the Sixers last week, putting them in 14th after a 2-2 showing. I don't think a home win over the Clippers is worthy of a two-spot jump, as I've already mentioned, but I can understand it in this case. They were simply over-correcting to make up for their previous mistake. However, if the Sixers can keep winning this week, they'll need another over-correction just to get them where they need to be.

Ugh. A team that hoped to be a tier up or maybe more is a mess. Here’s hoping the lineup changes Brett Brown made before the break continue to work.  [Charles Curtis, For The Win]

Breaking it down: If they don't continue to work, the Sixers might be in trouble. There are only so many moves Brown can make.