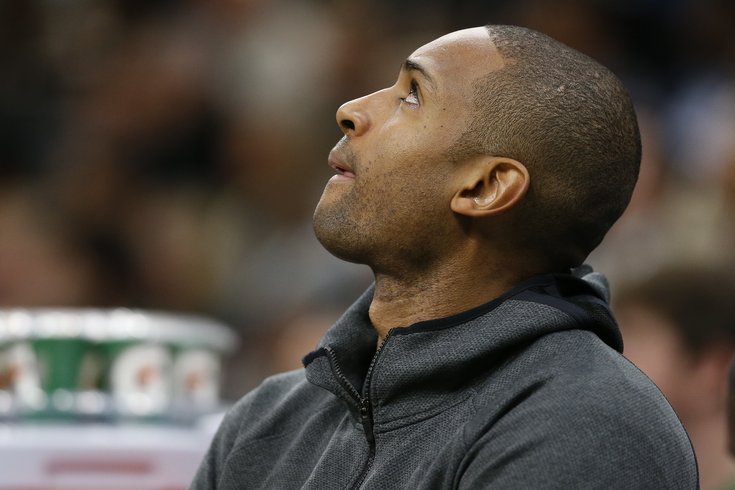 Philadelphia 76ers center Al Horford looks to the video board while on the bench.

Al Horford will remain in a bench role with the Sixers moving forward, which he revealed to reporters himself during media availability on Wednesday afternoon.

"It's what the team needs right now, and that's what we're doing," Horford said. "I didn't really give it much thought to be honest, I'm just refreshed being back and ready for the second half of the season...I'm playing similar to how I was playing before."

If it was that similar, of course, the Sixers would not have made the move to begin with. But there is no longer any doubt over whether Horford's move to the bench was a matchup-related move against L.A. or the sign of something bigger to come.

The NBA's All-Star break does not come neatly in the middle of the season, which presents some challenges for a Sixers team trying to find its offensive identity before competition improves and things get tougher down the stretch. Head coach Brett Brown views this upcoming period as an opportunity to solidify things heading down the home stretch, starting with this adjustment that will help the starting lineup maximize the talents of Joel Embiid and Ben Simmons.

"I think for the moment, we're going to try to grow that rotation as you saw against the Clippers," Brett Brown added. "With 27 games left, my mindset is to take this next period of time — seven, 10, whatever games — and really get precise and purposeful with our rotation, and then take that run home and polish it up. I think that 27 games is an eternity by NBA standards."

Exactly who will start in Horford's place was left purposefully unclear, though if we're looking at the Clippers game as a guideline, Furkan Korkmaz and Glenn Robinson III were the first two players to get a crack at starters minutes. Brown leans toward consistency when developing rotations, preferring to keep guys in the same roles every night, and that seems to be the running theme here — even though Brown admitted there may be some one-off changes depending on the opponent.

"To think it's going to be erratic, I don't think that. I think in the rare case there's something that's pretty clear, you'd have to think it deeply through. For instance, let's say you're going against [Marc] Gasol and [Serge] Ibaka, what are you going to do there? Indiana, two legitimate bigs, what are you going to do there?" Brown said. "I'm not married to it as a be-all and end-all, it does interest me the most, and so I intend to pursue what you all saw against the Clippers more often than not."

Does this signal the end of the attempt to play "bully ball" for Philadelphia? You could earnestly argue the opposite, with the team now better positioned to hunt one-on-one matchups offensively and (lineup permitting) be more switchable on offense. They may not have the overwhelming size to start as before, but they will remain one of the biggest, if not the biggest teams in the league out of the blocks, and the spacing around that size should improve almost immediately.

Horford has said the right things to date, but it will be interesting to see how he handles this over an extended period of time. You'd have to imagine this stings for him, a decorated veteran who signed a huge contract last summer and has now been relegated to backup minutes for the first time since he was a rookie back in 2007.

He is not the only person to blame for the failure of the initial starting lineup, which extends to the GM, the coach, and the rest of the players around him, though he will be the one who has to sacrifice in order for the team to move forward. And so far, his teammates have seen nothing but the same old professionalism from Horford.

"Just a professional, [it's] everything we've already known about him," Tobias Harris told reporters Wednesday. "Obviously as a group and as a team, we're still trying to figure out and see what works best. Just to have that mentality and be able to do what could be a great move for our team and see if it works, that shows a winning attitude, winning mentality, and we'll see if it works."

The most pressing question left is what impact this will have on closing lineups, which tend to be a lot more important than the starting group anyway. In their final game before the break, the Sixers played Horford and Embiid together extensively in the second half, including for an important run in the fourth quarter. But when push came to shove in the final few minutes, it was Matisse Thybulle who got the call against the downsizing Clippers,

If you're forecasting future points of debate, this is the obvious place to turn — including if you're Al Horford, who was clear about his desire to finish out games when asked on Wednesday.

"You definitely want to be there at the end of the game, there's no question about it," Horford said. "That's always where you want to be."