What they're saying: Sixers' title odds, replacing Horford, and how to handle Embiid and Simmons 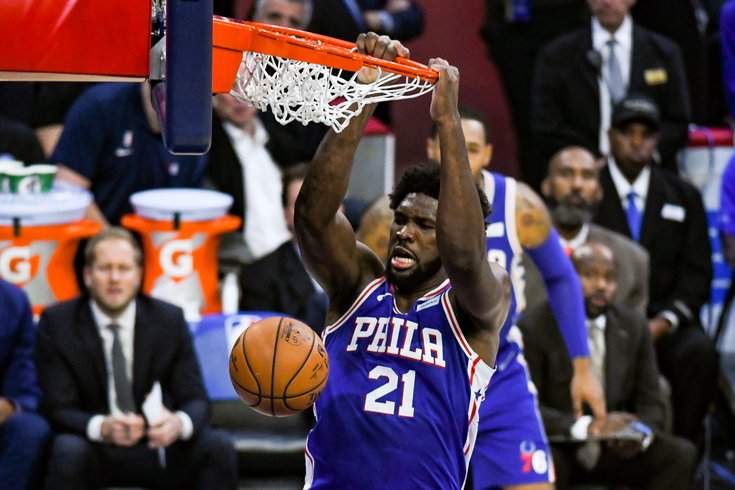 If it feels like it's been forever since the Sixers have played a game, you're not going crazy. With the NBA All-Star break over this past weekend, it's now been over a week since the team last took the court, when they beat the Clippers for a big home win.

And, of course, the break came just when things were starting to look up for Philly, which won three straight heading into the break and may have found a winning combination in that win over the Clippers: Al Horford coming off the bench. That's likely going to change quite a bit for the team coming out of the break, as they'll not only be looking to find a replacement in the starting five — it was Furkan Korkmaz getting the call last week — but will also have to see how that move impacts Brett Brown's rotations and late-game management.

They have 27 games left to figure it out, and some ground to gain in the Eastern Conference if they hope to have some form of home-court advantage in the playoffs. It's going to be a sprint to the finish, and the Sixers are playing catchup.

Before they return to action on Thursday night against the Nets, let's take a look at what they're saying about the Sixers coming out of the break...

Last week, our own Kyle Neubeck posed the same question. And, interestingly enough, he basically came up with the same answer: Glenn Robinson III might be the team's best option for a fifth starter going forward.

Obviously, there will be some cons to starting Robinson, who was acquired along with Alec Burks at the deadline. But, at least for now, let's take a look at what Bodner believes to be the case for starting GRIII:

The case for starting Robinson: When the playoffs roll around, one simple question is front and center: How much does a player take off the table?

A big reason Korkmaz might be a bad fit for the starting role is that he takes quite a bit off the table defensively. The Clippers game is a perfect example — they are deep with perimeter scoring talent, and the Sixers were forced to have Korkmaz defend Lou Williams. Williams had an off shooting night (5 of 15), but that’s not the assignment you want to give Korkmaz night in and night out over a seven-game series. Enter Robinson.

The oft-cited stat that Robinson was Golden State’s most frequent defender on No. 1 options is misleading. While the statement is objectively true, it also ignores results. Robinson was on a bad defensive team that had little to no capable options to check the league’s best perimeter players, and Robinson was the closest thing they had. So he tried, and tried admirably, but the 26-year-old is not a shutdown defender by any stretch of the imagination.

Robinson, though, wouldn’t have to be that in this starting lineup — not with Simmons, Richardson and Embiid by his side. As the fourth-best defender on the floor, Robinson is capable. If he can avoid embarrassment on defense, and if he can make 40 percent of his catch-and-shoot 3s (as he did with the Warriors), Robinson will present a compelling case for the role.  [theathletic.com]

The best is yet to come?

The Sixers, who have the second-easiest schedule after the All-Star break, should be in good shape down the stretch — but only if they can get the best out Joel Embiid and Ben Simmons. Sure, they'll need to figure out the fifth starter spot, have their other starters playing — and playing well — and get contributions off the bench. But, as most things do with this team, it all depends on Ben and Jo.

Let’s start where everything starts with the Sixers: Joel Embiid and Ben Simmons. We can debate fit and clashing skill sets all we want. The bottom line is the Sixers need the All-Star duo to be peaking down the stretch and into the playoffs.

Their win over the Clippers before the All-Star break represents exactly the type of performances needed. What was most impressive is that neither player sacrificed their aggressiveness to accommodate the other. Embiid took 17 shots — but also got 13 free throws — while Simmons took a season-high 22 attempts.

While he's played at an elite level the last 20 games, Simmons' last 11 may represent the best stretch of his career. The 23-year-old has averaged 12.5 field goal attempts in that span. When he takes at least 13 attempts from the field this season, the Sixers are 17-5. While the jumper may not be there, his improved shot is visible from the line, where he’s hit 73.9 percent on 8.4 attempts during that stretch.

There’s no denying Embiid and Simmons’ importance, but having all of your top-five players is also pretty darn important. The Sixers have only had Embiid, Simmons, Tobias Harris, Josh Richardson and Al Horford together for 21 of 55 games. That’s just 38.1 percent.

The Sixers are a respectable 9-7 when Embiid hasn’t played this season, but it’s clear they need all five of these players.  [nbcsports.com]

Speaking of Embiid and Simmons, Daily News columnist Marcus Hayes has an interesting theory for how Brown can get the most out of his two All Stars: treating them like children.

When I first started reading this, I thought Hayes was going to say Brown needs to be more of a disciplinarian, but it's actually quite the opposite. It seems he wants Brown and the Sixers to more or less let them do whatever they want, assuming they're showing no interest in overcoming their biggest faults (Simmons' shooting and Embiid's conditioning). He makes the comparison to how Larry Brown and Allen Iverson were able to coexist (right up until they weren't).

I don't necessarily agree with Hayes' logic that allowing these two kids — in NBA terms, they're both very much still kids — to do whatever they want is the correct move, but it's better than the alternative. Disciplinarian coaches don't generally work in the NBA any more, as the players have become more and more powerful over the years.

Often, the healthiest and most productive parenting methods involve letting your most precious assets mature at their own rate. This is true with children, and with ballerz. Ben and Joel, with so much left to learn and with so little inclination to learn it, qualify as both.

If I were Brown, I’d accept my world for what it is.

I’d ignore Embiid’s shortcomings — he’s an out-of-shape bully, a taunter and instigator who still gets flummoxed by double teams, with a limited repertoire of post moves and a diminishing inclination to use them. He isn’t going to get any leaner, or any smarter, or any more polished in the next two months, so why fret?

I’d recognize that Simmons is too ashamed of his shooting form — and the attention it attracts on social media — to shoot the perimeter shots that will help my team. I’d recognize, and empathize with, the humiliation he must feel when he’s showered with patronizing cheers after he shoots a three-pointer, like some 7-year-old brave enough to chuck the training wheels off his bike. Simmons isn’t going to shed his psychological shackles over the last few weeks of the season.  [inquirer.com]

What are the odds?

It appears that SportsBetting.ag has released new odds for NBA playoffs, and despite the way Sixers fans might be feeling, oddsmakers aren't that down on the Sixers, who are currently tied with the Celtics for the second best odds to win the East.

To win the Eastern Conference

It looks like Vegas odds makers are buying into the Sixers as being built for the playoffs over the regular season (or at least know that bettors do). While the Sixers’ odds to win the Eastern Conference have declined slightly from 2/1 to 5/1, that stills gives them the 2nd highest odds to represent the East in the NBA Finals (tied with Boston). The Miami Heat made a major leap, going from 14/1 to 7/1.  [libertyballers.com]