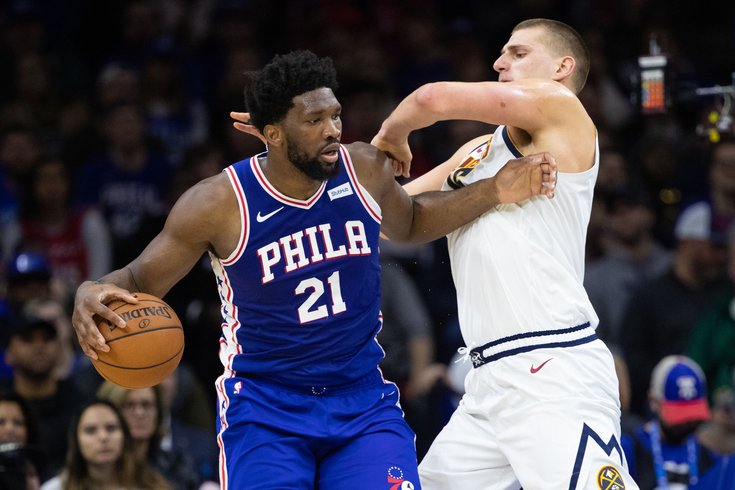 Joel Embiid got the better of Nikola Jokic Tuesday night.

The Sixers didn't get much out of Josh Richardson in his first game back, but they ended up beating the Denver Nuggets anyway, slugging it out in a 97-92 win on their home floor.

Here's what I saw on Tuesday night.

• The return of Josh Richardson was not necessarily explosive for Richardson himself, but it did play the way the Sixers arranged their bench units. Someone will probably drop out of the rotation once Richardson is playing his full allotment of minutes, but with 10 guys getting minutes, the Sixers toyed with an assortment of lineups around their two young stars.

Conceptually, the initial idea was to surround Ben Simmons with guys who can run and defend and to put guys who can space the floor around Joel Embiid to let him go to work. There were certainly some alterations along the way, but it makes sense with the identities the Sixers have built when each guy is out there on his own.

Both guys took advantage of those looks. Simmons and the wing defenders dug the Sixers out of an early hole by stringing some stops together, and once Embiid came in alongside Raul Neto, Mike Scott and company, he went to work on the low block, either scoring or finding the open man when Denver sent a double team.

They probably won't be playing 10 guys in the rotation for very long, Brown told reporters on Tuesday night, but they made good use of what they had.

• Matisse Thybulle is going to come back down to Earth at some point unless you think he's going to be one of the best shooters in the NBA, but this kid is in a hell of a groove right now. There is nothing more powerful for a young player than confidence and the production to back it up, and though he may be the youngest man on the totem pole, he must continue to play a huge role for this team with Richardson back in the fold.

He was part of a huge Sixers push in the first half, and he was not an accessory to Philadelphia's big run. Thybulle was at the center of it.

Matisse Thybulle, to me, you are perfect. pic.twitter.com/AzlG1tsqcV

There were still some of the young player problems you expect, like an over-pursuit of blocked shots that cost the Sixers some open threes conceded, but the good far outweighed the bad. Thybulle's hands were everywhere, bothering Denver in passing lanes and screwing up their guards in pick-and-rolls. The Sixers crushed the Nuggets basically whenever Thybulle was on the floor, which was no accident.

Will he be able to take his home dominance on the road? We'll find out over time. But he certainly seems to thrive in games played in South Philly, and Thybulle deserved the chance he got to play crunch-time minutes on Tuesday night. The question at this point is just how big of a role he can play for this team when the games start to matter, because he is out here balling out of his mind.

• There are not many games where you can say Al Horford is outright bad, but he just did not have it against Denver in the early stages of Tuesday night's game. He was a victim of his own unselfishness with some uncharacteristic turnovers, where he tried to thread passes into places they really had no chance to reach.

To make matters worse, his three-point touch mostly evaporated despite getting some pretty good looks against a good Denver defense, and with the Nuggets closing up shop everywhere else, it made it hard for the Sixers to generate offense in a halfcourt setting.

But to his credit, Horford came alive during a stretch in the middle of the third quarter, and he sustained the positive momentum into the fourth quarter and helped the Sixers play some rugged defense to squeak out to a lead with Embiid on the bench. A better version of Horford and the Sixers probably run to a comfortable victory, but he gave them just enough.

• Tobias Harris had a rough start on the defensive end Tuesday, though I'm not sure you can blame him for Will Barton catching the holy spirit and going off in the first quarter. He also didn't have his greatest night on the offensive side of the ball, falling victim to some structural issues that were exacerbated against a good defensive team.

But Harris came up with some big defensive plays, he took care of the basketball, and he was one of the only guys who really tried to take it to the teeth of Denver's defense, hard as that was at times with the way the Nuggets defended them.

• One of those Simmons games that is hard to put in a specific category. He was excellent when the Sixers were able to get out and push the pace, and the lineups he played in alongside Thybulle, Harris, and James Ennis really played to his strengths, with the Sixers running Denver ragged out of those looks.

Unfortunately, the Sixers had a lot of problems when they had their full starting five on the floor, with Denver sending help off of Simmons for much of the game. That made it hard for Harris to find driving lanes, and ultimately bogged things down for Philly. And Simmons had a couple of those maddening turnovers he tends to have where he's most of the way to the rim, decides better of it, and then throws a mid-air pass right into the hands of a waiting defender.

Philadelphia's monster runs and terrible swoons are often just a mirror image of the style of game they're in and how that impacts Simmons' viability. The problem is there's not really a way to create an ideal environment for him for 48 minutes with the way the team is set up, so they'll have to keep working around the fit problems he and Embiid have together.

• There were a lot of frustrating errors from Embiid on Tuesday night. He continues to dribble too much for basically everyone's liking, and it gets him into trouble when he relies too much on his handle to create offense.

Embiid also came out way too sluggish in the second half, which allowed Nikola Jokic to get going after he had a terrible start to the game. The half-hearted attempts to closeout and the passive defense were especially frustrating to watch because Embiid came out and really competed hard in the first half and at the start of the fourth quarter, altering Denver's shots around the rim and coming up with a few huge hustle plays.

(Speaking of his second-half defense, he and Harris got into it after a blown switch gave Jokic a free dunk at the rim. It was not the first time they had disagreed on what they should be doing on a defensive swap, and it was a rare show of frustration between the two teammates. Not any cause for alarm, but they had some things they needed to clean up.)

On the positive side of things, his post-game was better (at times) than it has been recently, and he took advantage of both Jokic and Mason Plumlee when he had them on the low block. His foot speed is far superior to Jokic's, and for once he actually took advantage of that, setting him up with jab steps and stepping around him instead of just trying to go through his chest on every possession. And he had his face-up jumper working throughout the night, which drew Denver's big men away from the rim and opened up some space for Philly's cutters.

The trick here is just tying this all together for four quarters. There were dominant spurts on both sides of the ball for Embiid, and this was far better than some of his games against other elite bigs lately.

• The Sixers got basically nothing out of Richardson in his first game back, which is understandable against a good team after a long layoff. He was on fire before missing six games, and they'll have to hope he finds that form again quickly.

Neto was also a +7 for the game on Tuesday night, but that didn't feel like that was representative of how he looked on the court by any means. His handle was sloppy, he couldn't create much separation with his handle, and he wasn't exactly an impactful defender, either. Fortunate to be on the floor with guys who carried him.

• Tuesday's national anthem singer either forgot the words or their place in the song right in the middle of singing it. There was a terribly awkward silence for a moment there.

And then, something cool happened — instead of shaming her, the fans tried to remind her of her place in the song and she found her footing, eventually getting loud cheers from the home crowd when she completed it. Philly fans are much kinder than they're given credit for.

(I won't lie, I probably would have booed her. But professional standards and all that.)