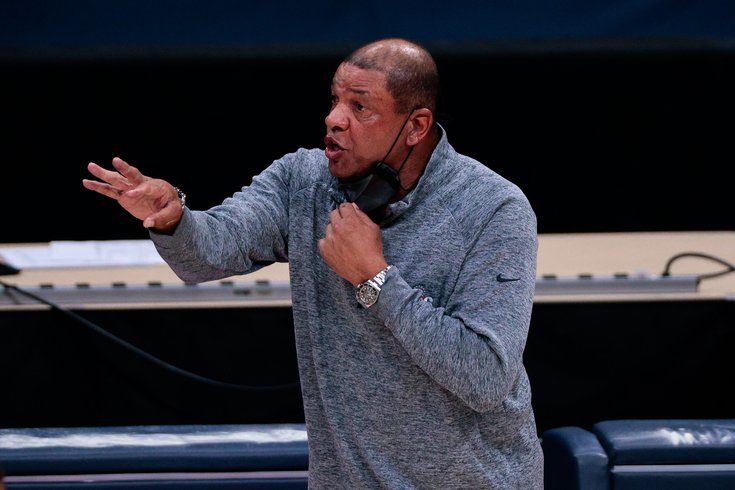 Doc Rivers is the narrator of the new podcast, 'It Was Said: Sports,' which focuses on six of the most impactful speeches in sports history.

It's been a dramatic offseason for the Philadelphia 76ers after they were shockingly eliminated from the playoffs by the Atlanta Hawks in June. The never-ending trade rumors surrounding reportedly-disgruntled star Ben Simmons have made for a chaotic summer.

Amid all the uncertainty swirling around the team, Sixers head coach Doc Rivers has taken up a new venture in his free time: podcast host.

Rivers is lending his voice to the narration of "It Was Said: Sports," a documentary podcast series that debuted Wednesday.

The series also will feature Michael Strahan, Urban Meyer and Al Michaels as guests. The 59-year-old Rivers called NBA games alongside Michaels during his brief broadcasting stint in the early 2000s.

"Sports have long been an important and defining part of our history," Rivers said in the podcast's trailer. "With their impact and influence, key moments in sports have helped shape, heal and inspire. It's in these pivotal moments in sports that we stop and listen. We hear and remember the words that so often ignite change.

"And in times of crisis, our shared passion for the arena has lifted our spirits. And in some of the toughest and most competitive moments, sports can humble us. In moments of defeat, the embattled athlete reminds us that we are all human. And delivering just the right words can inspire us to be great."

The first episode focuses on 9/11 and the impact the terrorist attacks had on the sports world. The 24-minute episode tells the story of late broadcaster Jack Buck reading his "For America" poem to the crowd at Busch Stadium in St. Louis on Sept. 17, 2001 as baseball returned after the terrorist attacks.

New episodes will become available every Wednesday. The series is available on Apple Podcasts, Spotify and Stitcher.

Relive some of the most important and iconic speeches in sports history.

Our newest series, It Was Said: Sports, narrated by @DocRivers and written by @JMeacham, arrives tomorrow.

Listen to the trailer + follow:https://t.co/V7jo8D3d1C

"It Was Said: Sports'' was written by Pulitzer Prize-winning historian Jon Meacham. Cadence13 and Shining City Audio created, directed and produced the project.

The show is a spin-off of Meacham's eight-episode documentary program "It Was Said" that won the Webby Award for best podcast series earlier this year.