For Ponzio's waitress, a half century of slinging hash – and laughs

'It’s like my mom is taking care of me,' says a loyal customer 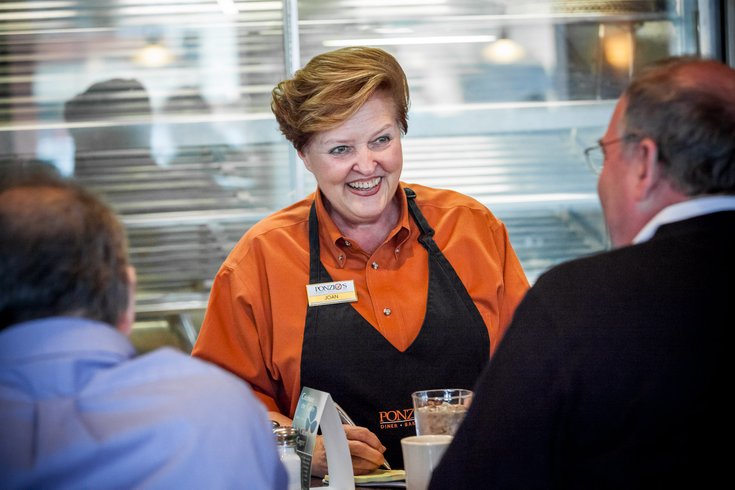 Joan Browning's smile is contagious, as is her laugh. She has a dedicated group of regulars who come for a meal at all times during the day. These gentlemen came in for lunch last week.

Like the popular diner she’s worked at for 50 years, Joan Browning is an American classic.

Given Ponzio’s location on busy Route 70 in Cherry Hill, that makes Joan more specifically a South Jersey-centric piece of work.

“It’s like my mom is taking care of me,” says David Lehrbaum of Southampton, who has eaten two meals a day at Ponzio’s for 25 years. She’s served most of those meals to Lehrbaum.

“Joanie” to her co-workers and many of her customers, she's the queen of the counter closest to the entrance of the diner, which opened in 1964.

Joan is 74, though she looks a decade or so younger. Her customers – and Joan – like her timeless routine.

For just under 10 bucks taken from her own pocket, she buys multiple copies of local newspapers for her loyal morning customers. Her regulars favor their news in print, not on mobile phones, freshly delivered alongside Ponzio's inviting breakfasts and Joanie’s good-natured humor and smile.

“Every time you laugh, you lose a third of an ounce,” she says.

Then she pauses, deadpanning, “But it hasn’t worked.”

The drive to work is less than two miles. She has never looked for work elsewhere. 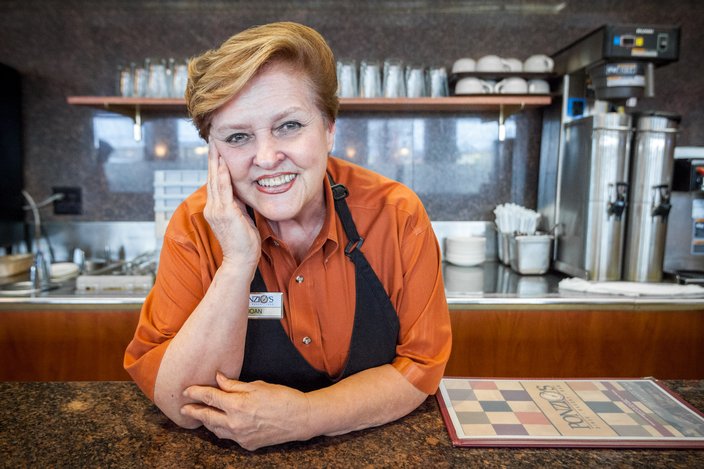 Joan Browning is a waitress at Ponzio's Diner in Cherry Hill, where she has developed a loyal customer base over 50 years.

Joan travels the same familiar routes, except for that time she ended up in Camden while aiming for Audubon, and she won’t use a GPS, because, well, who needs one when your life is lived in a familiar two-mile square, self-made box?

She’s pretty much always at work, except, of course, when she took time off for a double-knee replacement a few years back, or at her nearby home, or maybe dog-sitting Mussolini, a coal black Neapolitan Mastiff. “Moose,” for short, is the pet of one of her 55-year-old twin sons.

Joan also has a daughter in Florida, whom she has not seen much of lately; she hates taking vacations even more than traveling to unfamiliar places.

She was last off “maybe five, six years ago.”

Maybe even more, she shrugs.

CATERING TO HER CUSTOMERS

Joan carries an outmoded “flip-flop” phone – her description – for emergencies. Though she's had it for years, she still isn’t quite sure how to use it. She gets help from co-workers.

Sounding defiant, Joan says she’ll never give up her landline.

There’s no computer or email in Joan’s world. “Oh God, no!”

In fact, the only time Joan ever thought about quitting Ponzio’s was the first time the diner tried going to an electronic ordering system.

Change, all change, “nearly gives her a heart attack,” explains Nick Fifas, a second-generation co-owner of Ponzio’s who has worked with her since 1992.

Grudgingly, she picked up touch-screen ordering with some close coaching in the diner’s second attempt with an easier-to-use computer system.

She still likes filling out an order ticket by hand, saying she only remembers when she writes things down.

Joan arrives early for her shift, well before the first customer, making sure everything is just right.

“She gets upset if it is not perfect,” says fellow employee Wendy DeFrancesco.

He points out one her several quirks: since Joan is terrible with names, she remembers customers by face – but mostly by what customers order and any special requests.

“She caters to the likes of her customers,” adds Lehrbaum.

QUEEN OF THE COUNTER

Joan has a list of regulars: Doc and Coach, for instance, who come daily for the food and atmosphere.

But mostly for Joan.

“People like Joanie are why we’ve been here for 52 years,” says Fifas, whose family's business also has a cook with 43 years in the kitchen and other long timers, but only one Joan.

“We have good food, we’re clean and we’re quick. But people come in here, sit at the counter and bond. Joanie is the mold here,” Fifas adds.

Joan, who hates talking about herself, agrees, though she and her two late afternoon counter customers shake their heads about one particularly demanding customer.

The customer has a long quirky list of likes and dislikes. They include microwaving rye bread and an insistence on sitting at the same counter seat every day – a seat she tries to reserve for him, lest an interloper get glowered into moving.

“People are really funny,” she says with characteristic diplomacy, adding that her picky customer is also a “pickle connoisseur” who will send a plate back if the condiment is not to his liking.

Then she quietly adds, “And he’s not even a big tipper.”

But for the most part, don’t ask Joan about tips.

“IRS,” she simply says with a scowl and a shake of the head. 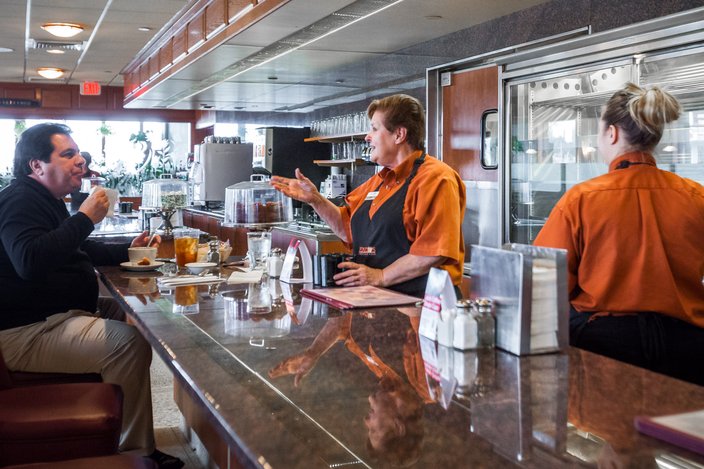 She’s skittishly modest about being the focus of attention: Her bosses didn’t tell her PhillyVoice had asked to come and interview her, for instance. They were afraid she would freak out, which of course she did.

They also downplayed a recent photo shoot of Joan, holding back on their plans.

While she knew the pictures were because of her 50 years with Ponzio’s, she had no idea her image would end up on billboards, bus shelters and banners.

“We knew very well what our plans were," says Fifas. "It is well deserved after 50 years, that we pay our respect and give her recognition.”

She turns bright red when DeFrancesco calls her “bus stop Joanie” and points out a man who’d seen her picture plastered on a bus shelter asked her out recently while she was eating elsewhere.

A widow for more than 10 years, Joan has no time for dating. Bring it up and she makes a face.

“I’m done taking care of anyone when I’m not working here. I’m done. When I’m off, I take care of Moose. That’s enough,” she says.

So if you go to Ponzios’s after reading about Joan, tell her the guy who politely asks nosy questions and orders cheesecake sent you. And he told you to sit at her counter.

Joan will take care of you – at least at Ponzio’s.

No need to rush, though.

She has no plans to retire: there's more meals and smiles to serve.