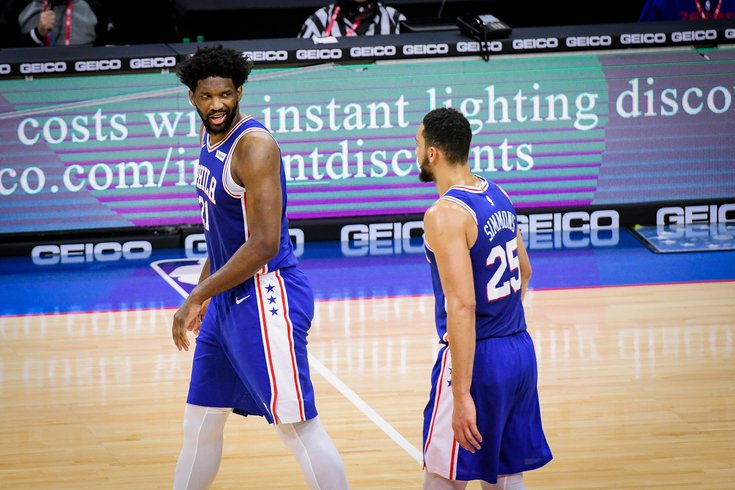 "Joel Embiid is disappointed in Ben Simmons" is a headline the big fella would be mad at, in spite of saying those exact words during his Media Day availability on Monday morning. The overarching message from Philadelphia's franchise center is that he wants Simmons back in the fold, no matter how unrealistic it seems right now.

Why? That part is pretty simple. He is not content with their second-round exits, but he has seen how many games they've won together in a short amount of time, and he wants to continue striving for more. So here's our best attempt to give him a platform without erasing the context.

"I would probably say I'm disappointed," Embiid said after a long pause. "Obviously, we haven't won anything in the [playoffs]. I got to do better, everybody's got to do better. But in the regular season, we've been so good and so dominant, that we know it's working. So I think it's all about taking the next step and everybody playing up to their potential, whether it's me, him, Tobias [Harris], Shake [Milton], Matisse [Thybulle], the new guys coming in, [Andre] Drummond, everybody's got to be on point...to be able to win is hard, and I haven't gotten close to it, but I can see. You get to the second round and you get to Game 7, it's so draining mentally. It's hard, it's not easy, but that's something I'm willing to do and I think my teammates are willing to do.

"I'm disappointed in the fact that we're seeing results. We know how it works. We win. We're all winners. It doesn't matter if someone is averaging 40 points, it doesn't matter if someone coming off of the bench is averaging two points. I think at the end of the day everybody wins when you win a championship. Everybody's going to get paid, whether it's me, whether it's Matisse, Shake, guys coming off of the bench, new guys and stuff, I think winning cures anything.

"I hope [Simmons] changes his mind. If I didn't like playing with him, I promise I would say it. But I do love playing with him because he adds so much to our team. We've been building this thing around us. This is not — I don't say, like, this is my team. I don't care, I don't care about any of that. That has nothing to do with me; I'm not trying to live in the spotlight. I got my family. I'm just trying to play basketball and have fun.

"I'm disappointed that we're in this situation. I don't think it's fair ... yeah there's stuff that could've happened either way. I'm sure Coach has mentioned kind of put the context of what he was trying to say and what he was trying to communicate. I know probably you guys say maybe my comments have something to do with it, which I don't think it is, because when you look at it, when you listen to the whole quote, it has nothing to do with calling anybody out.

"So I'm just disappointed he's not here because he knows it, too. He knows we can win together. I think we just all, as a whole, a few of us have complained about the fans, and as a whole, we have to just not care, and just play better. Just play our game. It doesn't matter.

"Sure, people are going to go out there. How many people have told me, 'Don't shoot 3s,' every single time I'm shooting 3s. This year I'm thinking about shooting more 3s. I don't care. Because that's what is going to help the team. Last year I thought it helped us because we didn't shoot a lot of 3s. People might have different views in that, but I think it goes a long way, so that's something I'm going to do. If you're not comfortable doing so, then don't do it. He does so many other great things for the team that it's not needed at times. Defensively he's a monster and offensively he creates so many 3s."

That is the big guy, in his own words, and it is a lot to unpack. At the top of his mind is a partnership he has seen work, the playoff results be damned. It shows, on some level, an understanding of where the trade market stands right now. Any move involving Simmons at this instant is likely denting Philly's chances to win at this very moment, even if a subsequent trade eventually brings an A1 star to the city to play co-star (or perhaps even leading man) next to Embiid.

And it's not a surprise that Embiid is a bit touchy about his quotes being framed properly — he has taken some blame for the Simmons situation deteriorating, fair or unfair, because of how he chose to address a question in the moments following their Game 7 loss. When the big guy speaks, everyone stops to listen, and he's painfully aware of that.

"What did I actually say? I don't think I said anything...so no, I don't have any regrets. I didn't call out anybody, I just stated the facts. I'm honest, I can't lie, that's just me." —Joel Embiid

Even now, though, Embiid says he doesn't have many regrets about what he said and did in that moment. His incredulous response to Simmons passing up a dunk has not dissipated, at least not enough for him to go back on what he said after that game.

"What did I actually say? I don't think I said anything. I was asked a question, 'What was the turning point of the game?' And I really believe it was the turning point of the game," Embiid said Monday. "If there's anybody that should be mad it's me freaking calling Matisse out for missing a freaking free throw. But we all talk about it and we all joke about it, we know we got to be better, so no, I don't have any regrets. I didn't call out anybody, I just stated the facts. I'm honest, I can't lie, that's just me."

If there was a theme to the presser, it was tough love. Yes, Embiid wants Simmons back. Yes, Embiid praised Simmons for a number of things, predominantly his defensive ability and some areas where he feels he can realistically contribute (noting he thinks Simmons can be a "monster" on the offensive glass). But Embiid is not cut from the diplomat cloth, and god bless him for that because his true feelings don't lag too far behind his pleas to get Simmons back in the fold.

Last season, Simmons was at the heart of one of the NBA's hottest trade rumors, prepared to leave Philadelphia in exchange for former Rockets star James Harden. Until this summer, it was the first time the Sixers had really considered a Simmons trade during his time here, even as other teams have inquired about his availability throughout his pro tenure. And while Simmons never publicly copped to it, getting floated in trade rumors has been suggested as a potential reason for the marriage falling apart in Philly.

Embiid, though, doesn't see outside noise as a reason for things in their locker room to fall apart. He never named Simmons while discussing managing outside noise and accountability in the locker room, but his response was telling:

"Honestly, we just all got to grow up," Embiid said. "I look at it in a way that, for example, I understand being in trade rumors and all that stuff, that's just part of the business. If Golden State came and offered Steph [Curry] and Klay [Thompson] for me, you think the Sixers would say no to that? I would say yes to that, because how do you say no to that? That's what they do, they're always going to find ways to get better, so you can't be mad at that.

And on the subject of what he would like to see if Simmons does return, Embiid once again led with a haymaker before softening the blows over time.

"I'm sure we all see the videos, so that would help," Embiid said matter of factly, referring to the videos of Simmons shooting in random gyms. "He has that potential to be that good...even without that, offensively he just creates a lot of shots helping our three-point shooters... there are a few ways he can get better, but it's not all on him. I got to be better. We go back to Game 7, I turned the ball over a few times, I missed a couple of easy shots. Game 4, I missed the game-winning layup. Game 6, I just had a bad game."

Embiid is right about one thing — he is an honest guy, even when that can be inconvenient for his goals and aspirations. His partnership with Simmons looks to be just about over, and I'm sure most in Philadelphia would admit it is disappointing if two second-round defeats are the sum of their experience together.

If that's the case, it'll be on Embiid to figure out how to make this work and who to make this work with. And though he lacks the ability to lie, Embiid is increasingly looking at the world through a salesman's eyes, knowing he might have to draw somebody into the tough, East coast city that is on the verge of spitting Simmons out.

"I like Philadelphia and I'm honest about this because they care. They come to games, they know who we just signed, who's the 15th man, they know everybody," Embiid said. "They're so invested in the team. So it's only fair for them to be pissed off when we lose, be mad, it doesn't matter. I could be averaging 50 points and we lose, and they're still going to be mad at me. That's just the way it is. They work hard for the money they make, and we get paid based on them coming to games and buying jerseys and all that stuff. I'm grateful for it."

"When I say be better [to the fans], I'm looking at it as a whole. I think about what can happen in the future. I'm thinking about, whether it's we have another max salary open and we're chasing after a free agent that wants to come here, I'm looking at it in a way that I don't want the fans to scare people off...not everybody's the same. The way I handle it is different than a guy that might want to come here. They might not want to be under that kind of pressure."