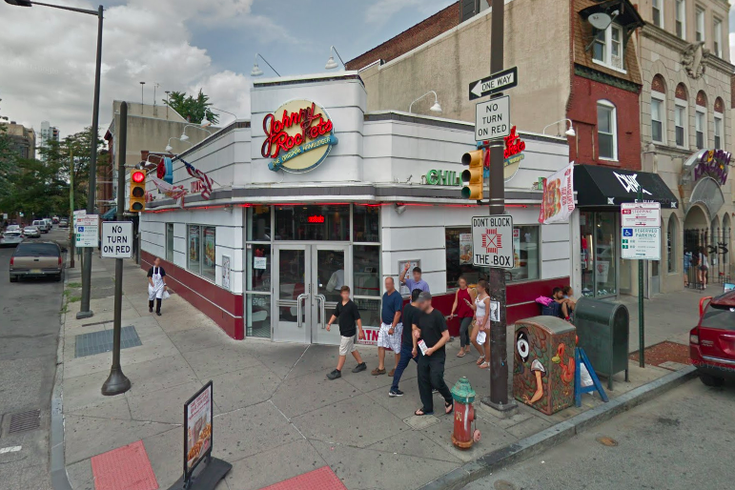 Johnny Rockets closed in Jan. 2018 after 20 years in business at 5th and South Streets. Philadelphia street artist Kid Hazo paid tribute to the shuttered restaurant in July 2019 with a facetious sign based on the original.

Johnny Rockets has been gone from the South Philly landscape for nearly 18 months, but its memory is living on with a new sign hung Friday by local street artist Kid Hazo.

The 1950's-style diner served burgers in at the corner of Fifth and South Streets for 20 years before it closed in January 2018. Fans of the restaurant would have to go as far as Six Flags Great Adventure, in Jackson Township, New Jersey, to find the nearest location.

No one has stepped in to occupy the former restaurant, despite numerous suggestions proposed here at the time of its closure. (Correction: Spread Bagelry announced earlier this year it will take over the space).

Since the space is empty in the meantine, Kid Hazo decided to memorialize Johnny Rockets with his signature Philly-tinged humor.

Now open for business in South Philly (the business of staring idly at a building you can't enter) is Jawny Ratchets, maker of The Original Hamberder.

New installation from Philly’s own @kidhazo this morning replacing the old Johnny Rockets signage (that was in business at 5th and South streets for 20 years, closed Jan 2018) with the new appropriately Philly themed "Jawnny Ratchets - The Original Hamberder"! • Instead of Chili and Malts we got "No Chill" and serving "Malt Liquors"... Opening this Summer 2019. • You can see the rest of #KidHazo’s Jawn themed restaurant spoofs at his "Signs" art exhibition at @paradigmgs opening Friday, July 26th! • Photos today by Streets Dept Contributor @ericinphilly! • • #philly #whyilovephilly #southstreet #discoverphl #visitphilly #phillyartists #phillystreetart #streetartglobe #streetartdaily #igers_philly

A nice mixture of Philly humor and Trump humor there.

The sign is meant to promote "Signs," an upcoming exhibition at Paradigm Gallery that features the work of Kid Hazo, Cornbread, Drew Leshko and Marissa Cianciulli. The show opens next Friday, July 26. Other Kid Hazo signs spoofing Philadelphia have secretly been stationed throughout the city.

If this all makes you miss Johnny Rockets, take heart. It's not quite the same, but South Philly is getting a new Nifty Fifty's in the not-too-distant future.