Jose restrengthens to hurricane, could impact Jersey Shore as early as Monday 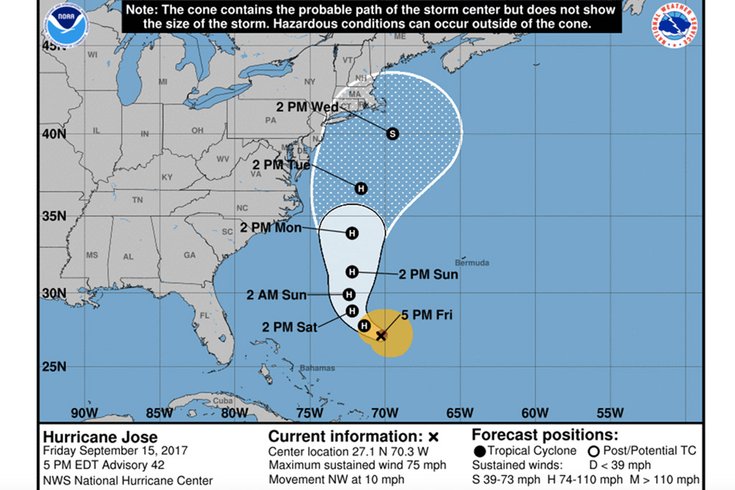 Jose re-strengthened into a hurricane on Friday and is expected to pass off the New Jersey coast Wednesday into Thursday, according to updated forecasts from the National Weather Service.

The storm is now a Category 1 hurricane in the Atlantic Ocean, but there is no current threat to land.

The U.S. National Hurricane Center said in an advisory Friday afternoon that Jose had sustained winds of 75 mph. It was located about 640 miles south-southeast of Cape Hatteras, North Carolina, and about 485 miles southwest of Bermuda.

The hurricane was moving northwest at about 10 mph, was expected to turn to the north-northwest by late Saturday and toward the north on Sunday.

Some strengthening was forecast through Saturday, with weakening possibly beginning on late Sunday.

On Wednesday, Jose is seen weakening again to a tropical storm off the Delaware/New Jersey coast, according to weather service forecasters in Mount Holly. The expected track has it about 200 miles off the Jersey Shore coast with the west side of the cone along the coastline.

Jose is expected to pull away on Thursday as high pressure begins to move into the region from the west.

As a tropical storm with winds of about 70 miles per hour, Jose had meandered in the Atlantic for the past few days before intensifying on Friday.

A period of rain, gusty winds, and coastal flooding are all possible at the Jersey Shore, but are dependent on the track, forecasters warned.

The highest risk of coastal flooding will be with the Monday evening and Tuesday evening high tides. Astronomical tides are already running high with the approach of the new moon.

Swells from Jose are expected to create a dangerous surf through the middle part of next week. A moderate to high risk for the development of dangerous rip currents is anticipated for Saturday  through Wednesday. Minor beach erosion is possible.